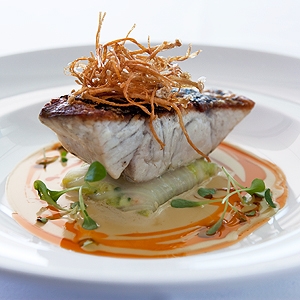 When cool, dry them off with a tea towel and set aside.

Mix spanner crab meat with chopped chives, and season with salt and pepper. Place 50g of spanner crab/chive mix on each wom bok leaf, and wrap up into a parcel and place them aside.

Start by sautéing the fine sliced eschalots and sage in a pan using a little olive oil – cook until eschalots become transparent.

Deglaze the pan with the white wine and reduce until almost gone. Then add the cream, bring just to the boil, then turn down. Allow to reduce slowly, until thick. Season with salt and pepper to taste, then strain.

Place tomato paste in a saucepan with garlic and olive oil and cook on a very low heat for 45 minutes or until oil turns red. When oil is red, strain and discard the rest. Set red oil aside to use as garnish later on.

Pre-heat large oiled pan until just smoking. Place barramundi in the pan, skin side down and cook on high for 1 minute.
Put in pre-heated oven for 5-6 minutes, or until just cooked. Place spanner crab parcels in steamer and steam for 5 minutes.

Put 30mL of the sage and eschalot cream on bottom of each plate (use a bowl plate like a pasta plate, rather than a flat plate).

Top the fish with fried enoki mushroom and place sprigs of mache around the plate in top of the sauce. 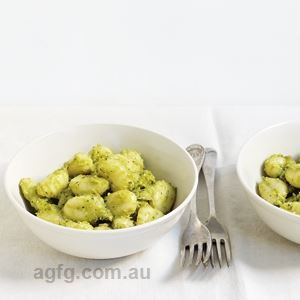 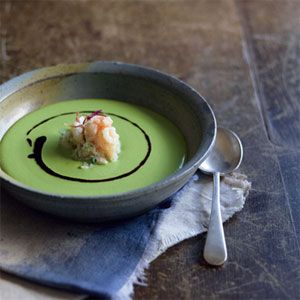 The black olive oil and a lemony crab salad make it lively and refreshing. 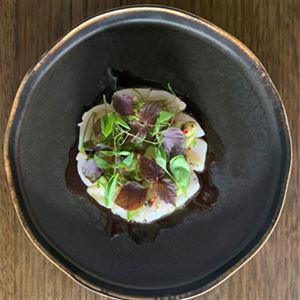