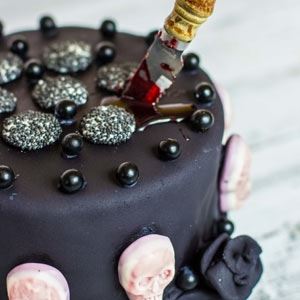 Line and grease two 17cm cake tins. Mix all dry ingredients for cake together in a mixer.

Mix eggs, oil, buttermilk, lemon and vanilla in a bowl and then add to the dry ingredients, mixing on low until well combined.

Bake in pre-heated oven for about 40 minutes. Test the cake with a toothpick by inserting into centre, if it comes out clean the cake is cooked.

Cool in tins for about 10 minutes before running a sharp knife around the tin, remove and cool on a cake rack.

Refrigerate for several hours or overnight, then cut each cake into two making four equal rounds.

Fill each layer of cake with about 1 cup of icing, leaving an equal amount to cover the cake.

Start by adding a large amount to the top of the cake and spread across the top and down the sides. It will take a while to get the icing even and completely covering the cake in a nice thin layer, as smooth as possible.

Knead the black icing until smooth. Sprinkle a small amount onto a bench, roll out about 38cm diameter of icing, running a pallet knife under the icing continuously so it doesn’t stick to the bench.

Fold the icing in half and put the folded half onto the middle of the cake, unfold to cover entire cake. Smooth down the side, pushing out the folds. Cut a V into the icing and remove the excess, then push it together and smooth over with a piece of plastic or shiny satiny material. Cut the icing off at the bottom of the cake around the plate. Plan to put decorations onto any rough sections.

Roll out a long black ribbon of icing and wrap around base of cake, forming ends into a black rose.

To make edible glue for sticking on the decorations, put egg white into a bowl and start mixing in sifted icing sugar until you have a paste that is easy to spread. The paste will look better if it is coloured black, so add a drop or two of colour.

Use this paste on the end of a toothpick to stick whatever decorations you would like to use. 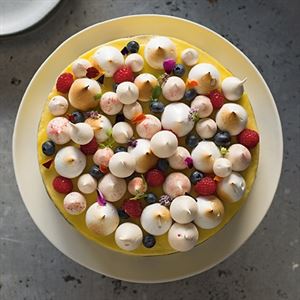 The cake itself is a moist lemon-scented white chocolate sponge and was inspired by a recipe from Am... 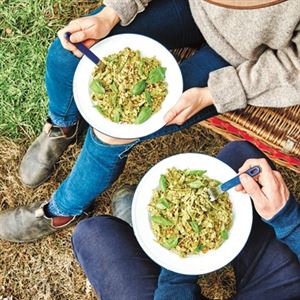 It is always a sure-fire winner using mung bean fettuccine. 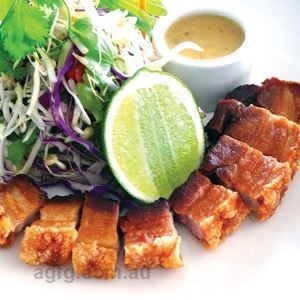