I spent the first part of my career in Invercargill, finishing off my Chef qualifications at The Southern Institute of Technology. I worked at some of Invercargill’s best restaurants at the time. Then I moved to Auckland and joined the Royal New Zealand Navy as a Chef and was based in Devonport.

After 18 months, I realised I was missing the enjoyment and creativity of being in the hospitality industry. I left the Navy and started a job as Chef de Partie at The Esplanade Hotel, Devonport. I worked my way up to Head Chef. I spent 2 years at The Esplanade Hotel, before I took a position at The Pacific Resort, Aitutaki in the Cook Islands, where I gained a passion for Pacific Island cuisine.

I moved back to Auckland, gaining a position at Hotel deBretts, known as a luxury boutique hotel with an art deco feel. I spent 2 years working there under Dave Verheul and Mark Sycamore, during this time I was struggling in a kitchen environment and I wasn’t sure if I was ever going to find my way as a Chef.

It was my next step that was the best thing to happen to my career. I was offered a position as Demi Chef at The Grill by Sean Connolly. Sean’s approach to food really grabbed me. It’s relaxed, uncomplicated, honest food, which supports the best local produce on offer. With Sean, I worked my way up to Junior Sous Chef, then moved to South Australia to Sean’s Kitchen as Senior Sous Chef. I spent another 2 years there before I moved to Dubai to help with the opening of Sean’s at Dubai Opera. After a year in Dubai, it was time to come home to my partner, who lives in Toowoomba with her family, where I now find myself working at the Cellar Door Restaurant of Rosalie House.

I always enjoyed baking with Mum when I was young, and I really just had a love for food and cooking shows. I weighed it against sports education at Southern Institute of Technology, but I wanted to travel and work, so being a Chef won.

I love fresh herbs and spices. We have a peppercorn tree in our garden at Rosalie House and I’m obsessed with drying them out and using them in our dukkah. They are just beautiful, unlike other peppercorns, though they still provide a warm, peppery heat with a sweet fruit aroma.

In my career, Sean Connolly. I loved watching Rick Stein as a kid and Jamie Oliver. I also find Dominique Crenn to be very inspirational.

I love that it’s probably one of the few careers you can have where you are constantly learning. There is no end to learning as a Chef. I also love the creativity, which also has no end!

Any ingredient you can’t live without?

Everyone loves the whole fish, it looks pretty impressive when it goes out, right now we are using a whole NZ sole, which is one of my favourites. 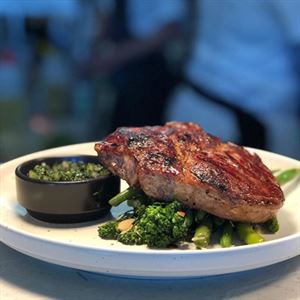 Soak up rural views across the countryside and vines while enjoying great food, music and wine at the Darling Downs' new wining and dining venue Rosalie House Cellar Door Restaurant on Lavenders Road in Lilyvale. Housed in an old Toowoomba railway building, this country style cellar door and restaurant oozes a relaxing vibe, as guests chill out on the verandah with a glass of estate wine in hand; or dine indoors amid oak barrels, an open fireplace and vibrant, eclectic artwork. With a brunch and dinner menu focused on fresh local produce with a Middle Eastern-Mediterranean twist, everything is made in house such as medium-rare lamb, pickled beets, quinoa, beans, mint, hazelnuts and labneh; finishing with peanut butter mousse, peanut brittle, salted caramel, chocolate ganache and raspberry. 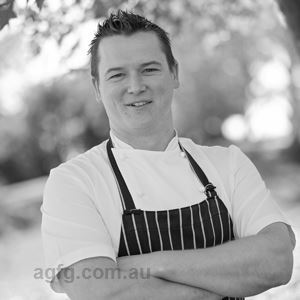