A spectacular performance of nature

Each year, tens of thousands of people in Queensland take to the seas to observe the migration of whales splashing, singing and swaying in the water. Whale watching in Queensland is a favourite holiday activity for families, couples and single travelers who wish to see one of the world’s most majestic mammals up close and in action. Many open beaches across Queensland are key whale watching destinations, with Australia’s east coast an annual route for the migrating humpback whale. Cairns and Ribbon Reefs are where Minke whales are often seen, encountered between May to August, with Brisbane’s Morton Bay a renowned humpback whale watching area. 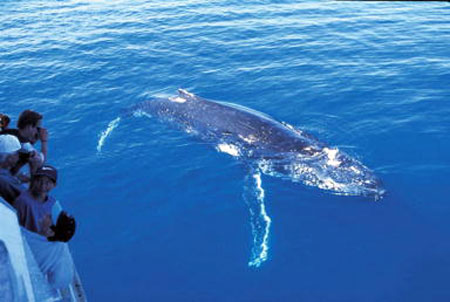 Where are some of Queensland's best whale watching destinations?

Hervey Bay in Queensland’s north is the whale watching capital of Australia, where approximately a quarter of Australia’s humpback whale population is spotted in July and August. Additionally, Hervey Bay is a great place to see mothers with newborn calves on their southerly migration. The humpbacks seen in Hervey Bay and around the isolated bays off Fraser Island are usually acrobatic and playful, creating an unforgettable memory for their fellow observers. The Gold Coast has also gained a reputation for being a whale watching area in Queensland, with tours running direct to the migration track of ‘whale alley’. The best time to whale watch is when water conditions are calm, usually in the morning or late afternoon, so get an early start and see these amazing creatures in action.

For more information, read up on whale watching in Australia.