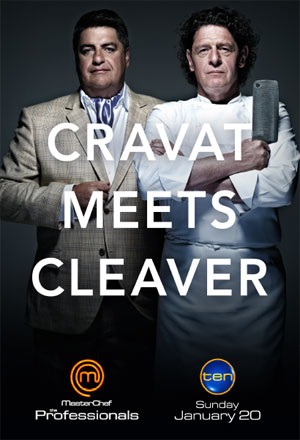 Change is constant and even the mighty MasterChef is not immune. Love it or loath it, when MasterChef returns on Network Ten this Sunday (7:30pm) it won’t be the show we know.

For those of you absolutely addicted to MasterChef, you’ll surely be appeased as, Matt, “The Cravat” Preston will be present with his ever discerning palate. In this competition series it is professional chefs plating up for our warm on-screen hero Matt and new-fangled co-host… “the godfather of modern cooking”, Marco Pierre White.

Marco “The Carver” Pierre White enjoys rock star status in the food world – age 33 he became the world’s youngest chef to be awarded three Michelin stars. Already a legacy himself, he promises MasterChef: The Professionals will bequest upon us a whole new level of food, rivalry… and friendship?

Over the past four years there has been a strong spirit of comradery amongst MasterChef contestants; however, jury’s out on whether or not that will carry on throughout this series. What happens when successful professional chefs go head-to-head (hat-to-hat) for the chance to win a hands-on kitchen tour spanning the globe? We’ll soon find out.

“The Professionals”, 18 in count, have been carefully selected and many have not only worked throughout Australia but internationally as well. Their commonality is food and passion, though they hail from all walks – diverse culinary backgrounds and tapestry of backgrounds to be revealed.

If this change is akin to the feeling you get upon discovering your favourite dish has been removed from the menu of your choice local restaurant, try to relax and enjoy. Rumour has it that the original MasterChef will return to the air waves later on.

Consider MasterChef: The Professionals a treat. Whether it becomes a signature dish is a matter of time.

Premiering Sunday, 20 January at 7.30pm on Ten and continuing Mondays and Tuesdays at 7.30pm - tune in to MasterChef: The Professionals.