"Barcelona was a mistress we shared. Everything we did, we did together.” ~ Matthew Goulding, p6.

Three words that epitomise Matt Goulding’s submergence in Spain and all that’s associated with it, Grape Olive Pig. Succeeding Goulding’s well received travels through Japan - Rice Noodle Fish, is a thick bound food novel with pictures that’s perfectly placed for the Spain bound food enthusiast. The story driven nature of the book has wine and ragu spilling in equal measures from the page. 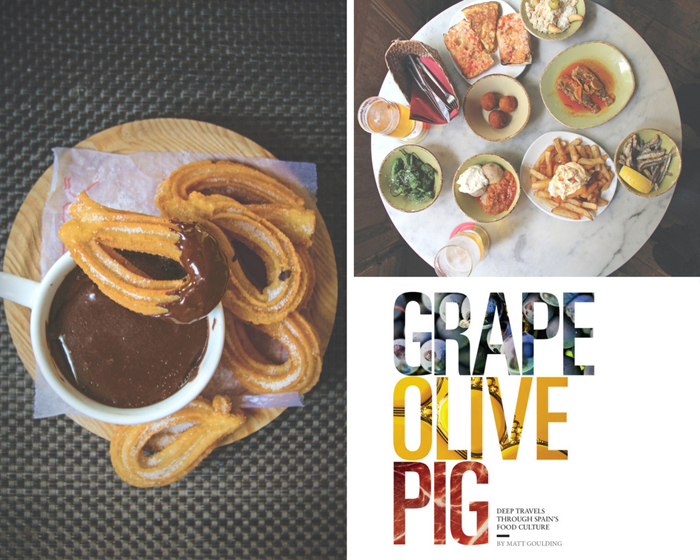 Entwined in pages stuffed with Catalonian history, do’s and don’ts, people profiles and travels to the far corners of the country, is a charming love story. It spurs the reader on, eager to find out what happens next, making it personal, and lends credence to his statement about falling in love with Spain on three separate occasions, Laura (his now wife) being the third.

"On Friday, September 23, 2010, at 6:07 p.m. on the terrace of La Paciencia at the base of La Rambla del Raval, I fell in love with Spain for the third time. I was late, but I needed to buy a cheap cell phone, just in case. Laura was there at one of the metal tables, sipping a cana of Estrella Damm (p4).”

Aside from the ongoing window into Goulding’s life as a travelling bon vivant, there’s a great number of handy tips for the traveller who wants to slide into Spanish life like a professional. Like the strategic snacking required to eat like the Spanish, who often don’t eat dinner till past 9.30 pm, or the very particular rules for drinking sidra (cider), don’t sip it my friend, knock it back. Also, sangria should be avoided on the main strip, as it’s mostly cheap wine with lots of sugar.

Culturally there are a few pointers too, along with some busting of Spanish myths. According to Goulding it would be wise to get familiar with the different regions of Spain and their origins, as some Spaniards identify as being from their region first and country second. It’s the equivalent of saying I’m not an Aussie I’m a Queenslander! In terms of the myths, as it turns out churros are not dessert, they’re mostly eaten in the morning or as an afternoon snack.

Spain is put under Goulding’s unflinching microscope from top to bottom. From the glamour of the tapas tables and paella pans, to the pig abattoirs and the almadraba (fish traps). It’s also not just a look at the entire food operation, but the people behind it. Like Andres Luis the abattoir’s ‘matarife’ or designated killer, or Antonio Gonzales who enjoys the classic fisherman’s breakfast of cigarettes and silence before heading out to sea. The insight these people provide can be attributed to Goulding’s ability to get under Spain’s skin and show off its heart.

"As much as I may love its beaches and bars and avant-garde structures, as happy as I am playing ping pong with Salva and watching Barca games with Jefe and wandering the jumbled streets of the Raval with a thick international posse, I am really going back for one reason: her (p16).”

An effective travel companion, as much as a good form of escapism for a few hours, Grape Olive Pig is a worthy contribution to any bookshelf or coffee table. Its vivid images, authentic stories and colourful characters perform the task at hand admirably, which is to instil the need for a Spanish culinary binge of epic proportions. So, who’s hungry?