Celebrating Easter with the Family

Easter Eggs, the Bunny & Other Traditions

Australia-wide families enjoy a nice Easter long weekend because there is a public holiday on Good Friday (06 April 2012) and Easter Monday (09 April 2012), our modern Easter celebrations drawing upon ancient traditions.

It might be a few weeks away, but living such hectic lives can cause these occasions to slip to the very back of the mind. So parents, please take this as a gentle nudge to get one's affairs in order early, lest you wake on Easter Sunday morning to the sound of children wailing and wondering why a certain bunny has forgotten them. 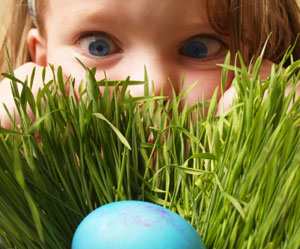 Why Are We Celebrating, Again?

At Easter the giving of eggs and other chocolate treats is a time-honoured tradition representing renewal, not that my kids ever cared a jot about the symbolism. All they want to know on Easter Sunday morning is where the `wascally wabbit' has left the goods. I’ve dug a little deeper into the Easter history books so I’m not left standing in my tracks sporting fluffy rabbit ears should the question arise.

Easter always falls on a Sunday between March 22 & April 25, coinciding with the vernal equinox when the sun passes from the north of the equator to the south, as defined by ancient pagans and Christian customs. Historically, spring equinox festivals celebrated Easter as a season of renewal, reflecting on the sunrise and symbols of life such as fertility and birth. Following that, Christians formally established Good Friday as the day of Jesus Christ’s crucifixion and his resurrection day on Easter Sunday.

Early Christian children gathered eggs and coloured them red to represent the blood of Christ. Yellow and green-dyed eggs were also popular, while Greeks and Syrians exchanged crimson eggs. By the 1200’s, coloured hard-boiled eggs were all the rage on Easter Sunday and were even taken to church services to be blessed, after which they'd be returned home and given a place of honour at the meal table.

The Christian Easter Calendar begins on Shrove Tuesday (the absolutely delicious egg-filled Pancake Day), followed by forty days of Lent leading up to Easter; it officially concludes fifty days after Easter Sunday with the Pentecost. 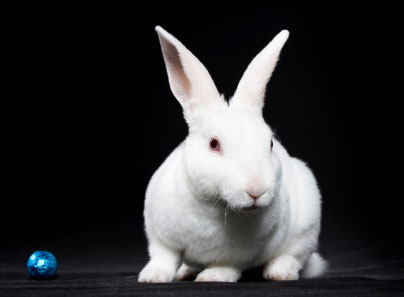 Which Came First, the Bunny or the Egg?

At Easter time some Australians focus on religious observances, while others are fully immersed in the sweets, baked goods, chocolate eggs and the Easter bunny. So which came first, the bunny or the egg? Turns out it was the bunny.

Kids are funny, aren't they? A mate tells me his youngest remains utterly convinced of the Easter Bunny's existence, even though this same cherub is fully aware of the situation regarding Santa Claus. (The jig was up when she caught her father red-handed, cross-eyed, swearing and dribbling in the early hours of last December 25 as he struggled to assemble the very tricycle that Santa was supposed to be dropping down the chimney).

One might have thought such a revelation would be a wake-up call about other much-loved characters that drop by for a visit on their respective holidays, but no, my mate reckons she's still agog with Easter approaching and has already begun counting the sleeps to the Easter Bunny's arrival. My daughter had the same magical wonder and one year asked, ``How many eggs do you think he will leave me this year, Dad?'' all innocent and childlike. She probably feined naivety for years in hopes of greater return purely on cute factor.

The Easter bunny has its origin in pre-Christian fertility lore, being that bunnies, hares, and rabbits are the most fertile animals on the planet (hence the phrase “at it like rabbits”). In pagan times the "Easter hare" was a sacred companion of Eoster, goddess of spring, and long ago parents began telling their children that the Easter hare would deliver presents – usually painted eggs – at the spring festival. Even though we celebrate Easter in autumn throughout Australia, the spirit of life translates in the transition of the seasons and the celebration of life and new beginnings thrives in our traditions. 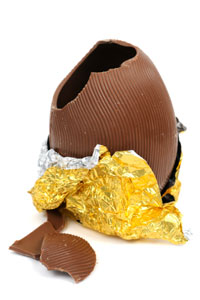 Elaborating on the Easter Egg

I sometimes wonder what my daughter’s reaction would be had I chosen to be frank and answer her “how many eggs?” question something along these lines:

Darling, there will be six small eggs, three cream-filled eggs and a small chocolate rabbit. There would also have been one large chocolate egg filled with M&Ms, except your mother and I scoffed that down on Tuesday when we had the munchies. All up, I can tell you the Easter Bunny's contribution to your celebration comes to $27.45 out of about $70 in total for the family, which makes him a darned sight cheaper than Father Christmas, though still responsible for taking a hefty whack of your father's hard-earned cash.

Chocolate has the ability to create moments of emotional euphoria, for kids and adults, so you know as well as I do that it’s always been heavily marketed since its foundation. It was 16th century German writing that entrenched Easter bunnies and chocolate eggs in European tradition and in the 1800’s Germany produced the first edible Easter bunnies, made primarily of pastry and sugar. At this time moulding chocolate was not the easiest feat, so early Easter eggs were mostly solid forms while the first hollow chocolate eggs were painstakingly made by lining the moulds with paste chocolate one at a time! 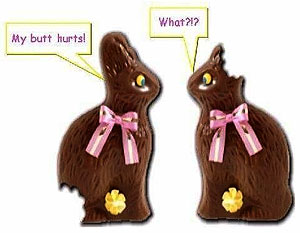 The modern chocolate Easter egg with its smoothness, shape and flavour owes its progression to the two greatest developments in the history of chocolate: 1.) Dutch inventor, Van Houten created a press in 1828 that was used for separating cocoa butter from the cocoa bean 2.) The Cadbury brothers then discovered pure cocoa in 1866. With large quantities of cocoa butter readily available, the secret ingredient for moulding chocolate, making Easter eggs was simplified. By 1873, the first dark chocolate egg filled with sweets was marketed by Mr JS Fry and in 1905 Cadbury released their first Dairy Milk chocolate egg.

By the 18th century, Victorian tradition had fully adopted Easter egg symbolism as part and parcel of the festivities, creating egg shells from cardboard or satin and then filling them with chocolates and gifts. In the late 1880’s Peter Carl Faberge made bejewelled Easter eggs for Russian royalty that took egg decorating to the extreme in exhibiting them laden with gold, enamel, pearl, diamond and rubies. Ukrainian and other eastern European counties gravitated towards stylized and intricate egg designs, the art of pysanky. If the egg decorator had a cold, I suppose it was called hanky-pysanky.

Decorative Easter eggs remain an important part of our holiday celebrations in Australia. Here you’ll find Cadbury and other distinguished chocolate companies releasing holiday chocolates that are only available once a year – sometimes they’ll still surprise us with new and innovative versions of the chocolate egg. (Fact: If you stacked this year's yield of Cadbury chocolate eggs end on end, your tower would be 10 times higher than Mount Everest.)

Not wanting to conclude on a branding note… Today we still see good old fashioned farm eggs, beautifully dyed and on display to be eaten with that massive Easter dinner spread. And yes, I admit, we have tried to be creative with the kids, keeping the tradition alive with Easter coloured dye and crayons. For our family, that lasted one year as we soon discovered how well the dye stains… everything.