Book Review - At Home & in the Mood

For Those Who Love Long Lunches

Luke Mangan’s become a household name for foodies worldwide as his initial Salt accreditation in 2000 has lead to widespread business expansion within Australia, Japan and the United States (one day he’d like to establish in New York City). With his sights set high, it’s no surprise that Luke Mangan’s ongoing contract with Virgin Airlines is ever evolving and he’s covering unchartered waters with Salt grill by Luke Mangan onboard P&O ships. Following suit, Luke Mangan has taken that charming spirit and sense of wonder to the pages of his cookbook, ‘At Home & in the Mood’. 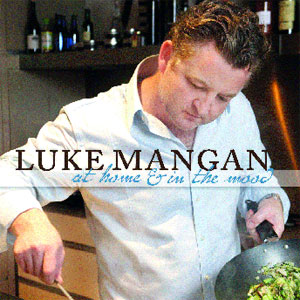 Any time of day, any season of the year, Luke Mangan’s ‘At Home & in the Mood’ is a welcome addition to anyone’s home library and has a long shelf life in itself. Full of stylish Luke Mangan versions of Australian classics such as lamb burgers or prawn salad, and written with likeability akin to the author’s own personality, this November marks the two year anniversary of the book release. Time is telling and ‘At Home & in the Mood’ readers feel that the book translates in the kitchen with the importance of a pinch of salt in a recipe.

There’s a spring trend emerging as this time last year New Holland also released Luke Mangan’s autobiography entitled ‘The Making of a Chef’. It’s designed to encourage young, emerging chefs who may feel otherwise discouraged by the challenging food industry – his own father once advised Luke that he would never be out of work because people always have to eat. And what an inspirational way to celebrate, as last year was also Luke Mangan’s 40th birthday! But let’s be clear - there’s no such thing as ‘over the hill’ when it comes to Luke Mangan.

Known in the public eye for his larrikin smile, Mangan’s become a celebrated favourite and his endearing chef status continues to carry him into various terrains within the culinary world way beyond the kitchen. His enduring New Holland book deal is another achievement on his list of endeavours, attesting to the multi-faceted career of the talented chef. We can only wonder why there wasn’t another book released this spring? 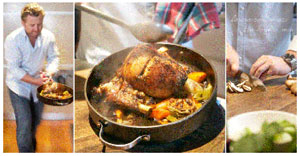 It may have something to do with the fact that this entrepreneuring man, who has been known to stumble as well as succeed, just opened Salt grill Surfers Paradise. As part of the grand opening, we were given ‘The Making of a Chef’ and from there happened upon ‘At Home & in the Mood’ via New Holland. Having interviewed Luke while he was overseas - taking care of the Japanese side of his Salt enterprise - we’re circumspect in saying though hopeful that another Luke Mangan cookbook is to come, possibly focusing on barbecuing?

Meantime we’re pleased to have ‘At Home & in the Mood’ in our clutches, as it’s a cracker. Luke Mangan personally favours nice long, lingering lunches; however, his cookbook is logically sequenced beginning with breakfast and brunch recipes. Take his ‘Fresh Summer Berries with Oat Crumble’ as a breakfast example; not only is it perfect for this time of year, it’s also a great winter dessert that will warm you right up – it even freezes well, though Mangan always emphasizes the importance of starting with freshest ingredients.

Whatever time of day you’re cooking, there’s a classy and versatile specialty to try out. Leading in, he imparts some wise tips for home entertaining:

1. Know your guests, their preferences and choose dishes where the food is in season.

2. Always pay attention to people’s glasses. Make sure your guests are well catered for and that there’s a variety of beverages ice at the side of the table – including non-alcoholic options.

3. Don’t garnish food with things like sprigs of parsley or herbs. They just don’t get eaten. Better to finely chop the parsley and incorporate it into the dish.

4. No need to plate up, place the food in the centre of the table and let people enjoy.

5. Every house should have a non stick pan! One of the best inventions of the last century.

Of course there’s also a list of essentials for home cooking and here you’re well advised. Having set up many a professional kitchen, Luke Mangan is known to use each and every utensil and devise on hand - many of them he wouldn’t ever want to be without.

Amongst cooking techniques and food choices, there’s a definite Asian influence amongst his recipes, clearly influenced by his extensive travel. He also hints at internationally recognized modern approaches to home-cooked food that will surely hit home in the typical household, including that fact that mains are often just one dish. And though we’ve yet to see a barbecue book by Luke Mangan, there’s a brief ‘on the barbecue’ section that is perfect for this time of year.

The recipes are also peppered with quality imagery of Luke’s oftentimes simple food, laden amongst portraits of the man himself enjoying good company and conversation; the creative direction behind ‘At Home & in the Mood’ is effectively warm and welcoming.

As you would expect, the theme of ‘At Home & in the Mood’ is one of encouragement, offering that these delicious dishes have been developed with the most important guests in mind, family and friends. In a similar vein, you’ll find Luke referring to his mother and how he was raised; never hesitating to add a personal touch – attesting to the quality of this book - Luke even includes ‘The Magnan Family Christmas Plum Pudding’ within the tantalizing array of desserts that will offer a mood enhancing ending to any festive home entertaining event you put together.