Stop a while to chat with these scaly Australian icons

A snappy creature native to the tropics of Australia, the crocodile is a national icon, and next to the likes of koalas and platypuses, stand as a main attraction for visitors to Australia. A popular activity for those who wish to see the crocodile in its wild, Australia offers a range of crocodile tours. Australia has two species of crocodile; the freshwater and the saltwater, each of which are found in the hot tropics of the northern region of Australia, mainly that of Northern Queensland and the Northern Territory. With an average of about 100 crocodiles in the tour areas, you are guaranteed to see a croc lazing about or looking and leaping for its lunch. 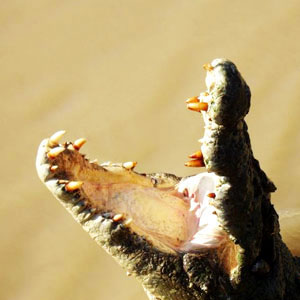 Darwin is Australia’s top croc destination and if you’re feeling daring, is where you have the chance to swim with the saltwater reptilians if you so choose. Allowing you to get up close and personal with crocodiles and their hatchings, a swim with the crocs may be as amazing as it is terrifying.

To find the best spots in Australia to smile at a crocodile, see; http://www.agfg.com.au/Blog/post/2007/07/06/Crocodiles-in-the-Northern-Territory.aspx