Crocodiles in the Northern Territory

Say hello to a saltie

Predominantly found in the territory’s Top End, saltwater crocodiles are one of the Northern Territory’s most iconic symbols, next to that of beer cans and red dust. Fondly known as ‘salties’, these crocs are found around rivers, billabongs and marshes as well as within the Northern Territory’s many crocodile farms or wildlife conservation areas. Get up and close with these snapping reptiles, but not too close – saltwater crocodiles are large, aggressive and very strong. 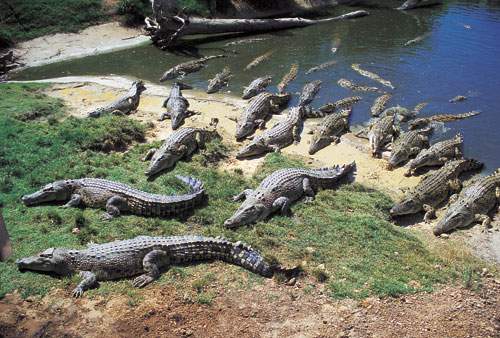 Where can I see crocodiles in the Northern Territory?

Situated in Darwin, Crocodylus Park is one of the Northern Territory’s premier crocodile houses. Full of displays, artifacts and the fearsome creatures themselves, the park is home to some 10,000 crocodiles, ranging from a miniscule 30 centimeters to a not so adorable 5 metres. Spread across 20 hectares of land, Crocodylus Park is not only home to the scaley creatures, but also to lions, monkeys, snakes and many more animals.

In the secluded Victoria River region, Coolibah Crocodile Farm is a family owned farm, home to an impressive four thousand saltwater crocs. Offering tours into the insight of crocodile farming, Coolibah Crocodile Farm is not so much a tourist destination as it is a destination for people wishing to get amongst the Northern Territory’s outback, do some camping and gain an insight into wildlife management in Australia.

If you’d rather see a croc in action amidst natural habitat, why not jump aboard a crocodile cruise. Allowing you to get a glimpse of the saltwater croc’s natural surrounds, watch as the crocs jump from the water as they are fed up and close to the boat. During the cruise, learn key survival skills for dealing with crocodiles - should you get a little too up and close with one in the wild - and return contented, knowing your limbs are still in tact.

For more information on Australian animals, head to Wildlife in South Australia