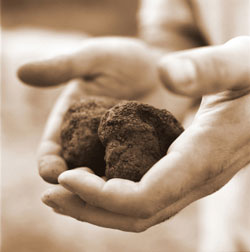 If December is the season to be jolly; then July is certainly the season for Australians to be indulgent.

Markets are bursting with delicious produce, delis are packed with scrumptious products and, restaurant menus are abound with desirable ingredients. And no ingredient is more delicious, more scrumptious, or desirable than the truffle! (and no, I am not referring to chocolate variety).

Truffles are considered to be the “Jewel of Cookery” and are deemed to possess aphrodisiacal qualities by some Connoisseurs! While the aphrodisiacal characters of the truffle are yet to be properly established, there is no argument that truffles are held in the highest esteem in international haute cuisine with a use limited only by the imagination of the Chef.

So what exactly is this delicacy that is causing so much commotion? Well, technically truffles are a group of valuable and highly sought-after edible species of underground ascomycetes belonging to the fungal genus Tuber! Simply put, Truffles are species of fungi.

Like mushrooms, truffles are the fruit of a fungus. They grow underground and rely on trees to host them and animals eating them to distribute their spores. Because fungi cannot make its own food, Truffles form symbiotic relationships with deciduous trees, including oak, beech, hazel and poplar. The hyphae coat the roots of the tree and help their host absorb soil minerals. In return, the tree host provides the fungus with nutrients. Truffles flourish throughout the winter months and can be found buried between the fallen leaves and twigs and the mineral soil.

There are really two genuine species of truffle, (although other less flavorsome varieties of fungi have subsequently adopted the lucrative Truffle identity):

The Black truffle or Black Périgord Truffle (Tuber melanosporum) is named for the Périgord region in France. Specimens can be found in late autumn and winter, reaching 7cm in diameter and weighing 100g though are usually much less. Black truffles on these markets sell between €200 and 600 per kilogram ($320 – 950 AUD), depending on the quantity and quality of the harvest.

The White truffle or Alba Truffle (Tuber magnatum) comes from the Langhe area of the Piedmont region in northern Italy. They can reach 12cm diameter and 500g, though are usually much smaller, Italian white truffles are more pungent and are held in very high esteem, selling for between 200€ and 400€ per hectogram ($320 – 640 AUD).

Because truffles are found below the soil surface (at a depth of around 20 cm), they are difficult to find and very expensive as a result. The world's most expensive truffle was a 1.51 kilogram White Alba truffle. It was sold for 125,000 Euros ($199,500.00 AUD) on 13 November 2006 to Hong Kong property tycoon Sir Gordon Wu.

Looking for truffles in open ground is almost always carried out with specially trained pigs or dogs. Pigs were used historically in Europe, but nowadays farmers prefer to use dogs. Both pigs and dogs have keen senses of smell, but while dogs must be trained to the scent of truffles, female pigs, (or sows), need no training whatsoever. Truffles produce a scent that mimicks the sex pheromone of boar saliva to which the sow is keenly attracted. More recently dogs have proved to be just as effective in finding truffles and a lot easier to manage, and unlike pigs, they do not try to eat the truffles when they find them.

Truffles have been collected for at least 3600 years, and contrary to stubborn legend, truffles can be cultivated! As early as 1808, there were successful attempts to cultivate truffles, known in French as trufficulture. People had long observed that truffles were growing among the roots of certain trees, and in 1808, Joseph Talon, from Apt in southern France, had the idea to sow some acorns collected at the foot of oak trees known to host truffles in their root system. The experiment was successful: years later, truffles were found in the soil around the newly grown oak trees. In 1847, Auguste Rousseau of Carpentras(in Vaucluse) planted 7 hectares of oak trees (again from acorns found on the soil around truffle-producing oak trees), and he subsequently obtained large harvests of truffles.

These successful attempts were met with enthusiasm, in the late 19th century, when a dramatic epidemic of phylloxera destroyed much of the vineyards in southern France, large tracts of land were set free for the cultivation of truffles. Thousands of truffle-producing trees were planted, and production reached peaks of hundreds of tonnes at the end of the 19th century.

In the 20th century however, with the growing industrialization of France, many of these truffle fields returned to wilderness. The First World War also dealt a serious blow to the French countryside, and what's more, the truffle fields planted in the 19th century naturally stopped being productive. (The average life cycle of a truffle-producing tree is 30 years). Consequently, after 1945 the production of truffles plummeted, and the prices skyrocketed, reaching the zenith that we know today.

In 1900 truffles were used by most people, and on many occasions. Nowadays, they are a rare delicacy.

In the last 30 years, new attempts for mass production of truffles have been started. There are now truffle-growing areas in Spain, Sweden, New Zealand, Australia, Oregon, North Carolina and the UK.

The first black truffles (Tuber melanosporum) to be produced in the southern hemisphere were harvested in Gisborne, New Zealand in 1993. In 1999, the first Australian truffles were harvested in Tasmania, the result of eight years of work. Trees were inoculated with the truffle fungus in the hope of creating a local truffle industry. Their success and the value of the resulting truffles has encouraged a boutique, but highly sought after industry to develop. A Western Australian venture had its first harvest in 2004, and in 2005 they unearthed a 1kg truffle that is potentially the largest ever harvested in the southern hemisphere. Production is expanding into the colder regions of Victoria and New South Wales.

Because of their high price and their strong taste, truffles are used sparingly. Truffle oil is often used as a substitute for truffles to provide flavoring, or to enhance the flavor and aroma of truffles in cooking. However, most truffle oil is a synthetic product that contains no actual truffle. Home Grown truffles can be found being used by several of Australia’s the leading restaurants, and in more recent years has proved to be a successful export to France and Japan.

If you ever wanted to experience the magic that make truffles to special, there is no better time than right now! Truffle season in Australia lasts from June throught to September.