Nearing the end of her three week book tour with Penguin Australia, promoting the release of her thirteenth book “A Cook’s Life”, Stephanie Alexander took the time to speak with us one evening over tea. Having completed her memoires, attributing to the heritage of her parent’s generation and contributing to the Australian canon of culinary history, much detail lines these pages about the hospitality industry and her personal life as a chef, food writer and activist.

The life of a restaurateur is not an easy one, and though she has retired from that part of her life, Stephanie Alexander remains a vital contributor to the epicurean community; these days her primary focus is educating children about gardening and cooking and their interconnection through Stephanie Alexander’s Kitchen Garden Foundation. This is what Stephanie shared with the AGFG, as an author and food activist passing on the passion from her esteemed point of view.

You’ll find our review of her memoire, “A Cook’s Life” in our blog. 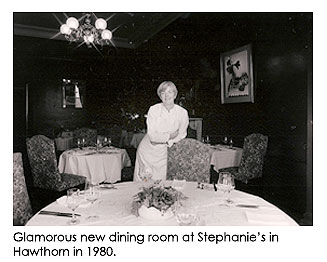 AGFG: You began writing your memoires at 69, the same age your mother, Mary Burchett, began writing her own. With your accumulation of knowledge over decades in hospitality and a lifetime of preparing and eating meals at home with family and friends, how did you narrow your memories down to 362 pages?

STEPHANIE: The comparable age was coincidence and a catalyst. Once I decided to start, I wrote “A Cook’s Life” like a story; it’s the unfolding of life, starting from my earliest memories that I dredged up – mother’s published works had made reference to my earlier years. From there friends were consulted to get the chronology and dates right and I referred to a lot of material from my sketchy books, memories and photos; I discovered letters that I’d written home during the year I spent in France at the age of 21. Once it was finished, my brothers and sister read the published version and had their input, “You didn’t include this, or this… “ 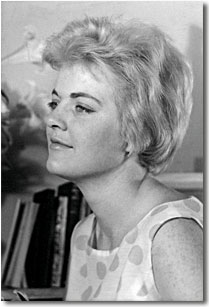 AGFG: In connecting the dots, one memory to the next, what was the most painful part of the process?

STEPHANIE: I knew I’d have to do with two broken relationships and grim times. I still feel strongly that it’s hardly believable if you leave out the sad bits and the bad bits. You come out of these patches and learn something as the result of them.

AGFG: Was it a cathartic writing process?

STEPHANIE: Not necessarily. By revisiting these memories, I had to go really deep into myself and ask why these things happened, and sometimes I still wasn’t sure as to why something happened or why I did what I did. In the process I made a rule not to make the writing an attack or to try and score points and wanted very much to support the privacy of my loved ones and close friends.

AGFG: And what was the most rewarding aspect?

STEPHANIE: Reflecting on my projects at Stephanie’s Restaurant, I learned a lot. I had no business skills but had a lot of energy and common sense. I also had a sense of fairness and have felt over the years that others do not run their business with that same ethic. As an example, my first husband had a close relationship with a Greek friend and for 20 years they shared things equally in business; even though our lives were tough, their professional relationship was about give and take. My father, too, had many business relationships, including the family solicitor. I saw people that set out to make life good for each other and make decisions that didn’t cut other people.

AGFG: How does it feel to have completed your memoires?

STEPHANIE: Very different from the kind of completion felt when the other books were done. It makes me a bit vulnerable but I feel that I have done the right thing in writing it. I have to also say that having worked in the food industry for such a long time, there are not a lot of people that have done it as long as I did and want to write about it, looking at where we’ve got to now. My memoires reveal an interesting story about Australia’s food development and early migration, referring to my parents’ story as they came from Eastern Europe, and all of this happened before most of the cooks today were even born. 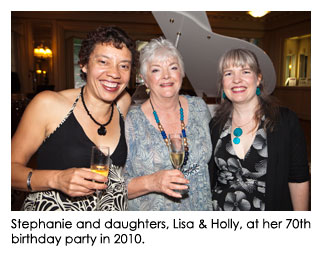 AGFG: You clearly embrace the power of being present and at the age of 71 fill your weekdays with lobbying and other enabling work for the continuous expansion of your educational program through Stephanie Alexander’s Kitchen Garden Foundation. What can you tell us about it?

STEPHANIE: It’s huge. It’s grown exponentially in 10 years. None of it has dropped in our lap. One friend and I started it and now there are 20 people developing it, supporting 30, 000 student participants a week. It’s a serious business and now we’re questioning where it’s going in the future. It does come down to forming relationships with the government and corporate partners, getting them to look at schools and see what’s going on. Parents respond positively and I speak persuasively. Though it has to do with money and geography and is a monumental task and I truly don’t know how far we are going to be able to go.

AGFG: You describe yourself as driven, loyal and energetic. Where is your energy coming from these days to continue on with your efforts at the Kitchen Garden Foundation?

STEPHANIE: Because I live on my own and my children are grown up, though I see them often, I am not diverted into other areas and I put my thinking into this project. I choose to put more energy into the foundation than others may be able to do. And I get pissed off when people call it a school garden.

AGFG: Jamie Oliver has visited your pilot project site on a few occasions, a legitimate garden in the program. How does he see your project?

STEPHANIE: He’s been back twice, keeping an eye on how it develops and to discuss key issues; he’s been inspired and is open to it, wanting to do something similar in the UK. As members they receive our information and supportive material, including our implementation model – it’s nice for the ego. Similarly, Alice Waters speaks about recreating a website in Berkley and so it seems there is a holistic movement growing not only in Australia, but in the UK and the US. We also have a subsidiary association in New Zealand.

AGFG: How far away are you from achieving your dream that the program will be available to any interested school in Australia? Or are you really shooting for the stars there?

STEPHANIE: It’s possible, but probably not in my lifetime. Our more realistic aim is a 3 year goal, for the garden program to be represented in 10% of Australian primary schools. Right now it’s in 3%. It’s well worth it when you see the kids’ changing attitudes towards food. 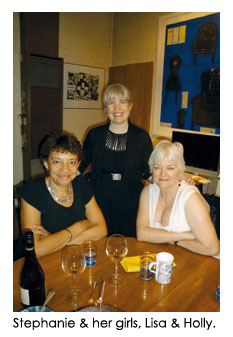 AGFG: Much of your own joy comes from your daughters, Lisa and Holly, whom you describe as your greatest “achievement in life” and to whom you have dedicated your memoires. From “A Cook’s Life” we have come to know of their own successful careers in the film, media and arts publicity. Are they carrying your torch? Has your own influence and culinary prowess found place in their home kitchens and domestic life?

STEPHANIE: Holly is a bit more suspicious and approaches things with a bit more rigour; she’s growing some of her own vegetables in the backyard and is becoming more and more confident and ambitious. Lisa doesn’t worry as much and has always been a natural cook. They find it hard when we’re all together cooking in the kitchen. If they’re cooking I have to go and sit down and grab a glass of wine and chat rather than staying in there suggesting "you know, it would be faster if you did it this way..." They’re an unbelievable support to me and being children of a restaurateur was not easy.

AGFG: When you sit in silence, writing at your desk and looking out onto the rose garden, where does your mind most commonly drift to when it deviates from the project at hand?

STEPHANIE: It goes to the plants. I really get a huge amount of pleasure observing the pattern on leaves and beautiful plants, regarding the evening sun’s highlights on the garden. It’s a confirmation that life continues and that life will keep on going in a cycle. Then I probably think about what I’m going to cook for dinner.

AGFG: In your memoires you mention that there is an element of loneliness in your single life. These days do you linger on a hope for companionship or are you content to travel and holiday with your daughters and friends amongst the other important roles you play?

STEPHANIE: I’m certainly content to travel with family and friends and that is what’s on offer. Being lonely is part of the human condition and particularly for writers - you spend so much time to looking at the computer. I’m certainly not lonely all the time. Sometimes I’m almost addicted to it and so I force myself to get out. I get sunk into this sense of being on my own and it can be negative so I dig up motivation to do something and get out there.

At Stephanie’s Restaurant I could hide in the kitchen, but what I loved doing once the mains were out was to tuck myself away with my business manager at a table near the wall. It was a great pleasure and basking in the rhythm of the night, when everything was running beautifully and happening as it should. When I speak to a room of 200 people who have come to see me present at an event I bring a friend or ally, remain polite and pleasant, and avoid being caught in the mass.

AGFG: Following “A Cook’s Life” tour, you are attending a number of industry shows, including Tasting Australia and Noosa International Food and Wine Festival. At Noosa you’re presenting at the premiere Westpac Ruby Luncheon, called upon to speak about your colourful career in the company of two other women in the industry, including Nicky Riemer who was your apprentice at Stephanie’s. Considering your restaurateur chef days, was it harder to pull it all off being female?

STEPHANIE: For me gender didn’t matter because I was the owner of Stephanie’s Restaurant. It’s harder to do what I did now, if it’s even possible at all… When I started the world was your oyster, and the only way to do it was to do it yourself. With the benefits of a liberal education, I saw food as a cultural expression and formal training did not narrow my view about what was acceptable. I would have been different had I partook in traditional training.

I believe everything you do influences who you are, and for me it was uni and travel that inspired me and food became my passion. These days Nicky and I like each other and are both very busy; I recently dropped by her restaurant and delivered some fresh Jerusalem artichokes. I am impressed by the career she’s carved out since her early apprenticeship days at Stephanie’s, as I am of Annie Smithers who also worked under me for a time.

Our “A Cook’s Life” book review is available online in the AGFG blog.