Sake essentially needs to be considered as its own category because it doesn’t truly fit into other western-oriented alcoholic drink categories. Known as Nihonshu in Japan, sake is often referred to as rice wine or mistakenly thought of as a spirit; because it is fermented from rice grain it is technically closer to a beer than wine but in flavour closer to wine than beer, hence the confusion. The alcohol content of sake varies but is typically 15-16%, higher than beer and wine but much lower than spirits.

The popularity of Sake in Australia and internationally is on the rise and there is a cultural shift catering towards specialized sake enthusiasts, as compared to gourmet beer devotees or wine connoisseurs. Strong indicators of this emerging popularity include the influx of sake restaurants and bars nationwide and the surfacing of “sake sommeliers” or sake consultants.

With the AGFG website and mobile applications you can refine your search for your required area/suburb and select Japanese cuisine to discover sake restaurants and bars near you.

A Bit More of the Sake Story

What was supposed to be a short sake debrief from Sono Portside’s bar manager, Jack Henderson turned out to be a much more detailed story about sake in Australian Japanese restaurants. Because there’s so much to sake, when explaining sake grades to customers, Henderson focuses on two main points: 1.) Rice polishing rate (Semaibuai) and 2.) Distilled alcohol content. Rice polishing is required because the brewing essence of the grain is located in the centre. Polishing removes the fats and proteins, leaving the best part of the grain for fermenting – a minimum of 30% of the rice grain is removed through polishing in premium sake.

Honjozo & Junmai rice is polished to between 70%-60% of its original size, Ginjo & Junmai Ginjo between 60%-50%, and Daiginjo & Junmai Daiginjo (the pinnancle of premium wines) to less than 50% of its original size. The quality and complexity of the sake increases with increased polishing rate and Junmai, Junmai Ginjo & Junmai Daiginjo are considered “pure rice sake”. In the past, lower grade sake would include distilled alcohol to increase potency, however it is now added to premium sake (Honjozo, Ginjo & Daiginjo) to enhance the aroma of the sake.

The Sono team has made some important decisions regarding their sake menu. By listening to customer and by committing to their goal of offering an authentic Japanese cultural experience to Australians, Jack had this to say:

Unfortunately due to current import taxation law, it is more expensive to import sake containing distilled alcohol. Therefore it is much more common to find Junmai, Junmai Ginjo & Junmai Daiginjo sake for sale in Australia. At Sono we have decided to absorb these costs and continue to import all styles of sake to allow our customers to experience the full spectrum of flavours and aromas that sake has to offer, especially considering that many of these higher priced sakes match extremely well with our cuisine.

Popular sakes, according to Henderson, includes Ginjo, “unsurprising as chilled Ginjo sake tends to be fruit driven,” and Junmai, “for price conscious customers… still premium, although not always as well structured.” Regarding hardcore sake fans who are accustomed to the intensity of flavour Jack explains, “we have some amazing, award winning ultra premium Daiginjo on offer at Sono.”

Waking Up to Sake Brewing Possibilities

Sake’s basic ingredients are rice, water, yeast and a mould called koji that breaks down starch molecules into sugar for conversion by the yeast into alcohol; this sake “brewing” process is unique in that the starch to sugar to alcohol conversion is not a two step process, rather the process occurs simultaneously. Specialized rice is required for sake making, of which there are 80 types, and high quality water is an absolutely necessary. A Japanese sake brewer is called a toji, of high social regard akin to the status of a musician or painter.

Boutique sake breweries are slowly popping up outside of Japan, with visionaries tapping into a 1000-year old Japanese tradition. The landmark label Go-Shu Australian Sake is currently our nation’s major brewery, owned by Japanese toji and businessman, Konishi Shuzo. He runs this Japanese rice wine distillery under the company Sun Masamune in Penrith NSW, producing high quality and palatable sake from japonica rice and water from the Blue Mountains.

Because of export costs, even the price of low quality sake from Japan is relatively expensive in Australia; as such sake consumers nationwide have gravitated to good value Go-Shu and since its commercial launch in 1996 it has become the most popular sake product represented in the domestic market. Sun Masamune has now expanded their product range, including Go-Rin sake with an individualized style based on its use of sparkling wine yeast – a first for sake. With one major sake producer in Australia, we’re far from the native Japan where about 1800 breweries exist (creating 10 000 brands of sake); however, with the success of Go-Shu we may see the market expand in coming years.

American entrepreneur and capitalist, John Gaunter has established himself as the first non-Japanese international sake authority based on his Master of Sake Tasting and Sake Expert Assessor certifications through Japan’s National Research Institute of Brewing. His book is entitled “Things About Sake That Even Japanese People Don’t Know” and his website is sake-world.com where he writes sake critique like that of a wine critic: "Nose is soft and creamy up front, touch of sweetness but with a lemony acidity. Light, springy, mild acid-bolstered flavour with a creamy sweetness in the middle. Touch of graininess too. Dry finish. A very, very faint fruitiness and lightness."

Chefs Are Serious About Sake

The sake trend in Australia has been making waves in the last ten years and special sake events showcased during the Melbourne Food and Wine Festival 2004. Today, sake specials and events are now sought after by gourmands with an affinity for Japanese food, who prefer the art of sake matching over wine pairing. Award winning Koko at Crown encourages their customers to take a similar approach to sake as they do to wine, demystifying sake with an informative menu that explains, “like wine, sake sourced from different areas of Japan take on a vast array of flavours and aromas.”

Koko at Crown further describe the “type” of sake on their menu to make it easier for Australian customers to decide. Their chef Allan Koh is known to create degustations with sake matching, and sometimes opts to serve sake in wine glasses, referring to the smell and taste as if enjoying fine wine. In fact, well-known glass company Riedel now makes an egg-shaped sake glass for a true connoisseur experience. 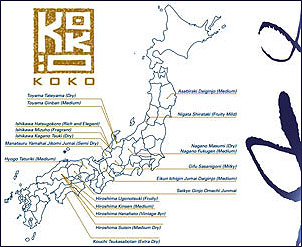 Allan Koh is not the only chef honouring the tradition of Japanese sake culture, with an Australian twist. Taxi Dining Room's Chef Tony Twitchett is known to work with Melbourne’s only sake sommelier, Oli Wang, creating food matches for a range of world-class sakes.

True to their name, Sake Restaurant & Bar train their staff to guide you in sake appreciation, so you can treat sake and food matching like they do in Japan, with the same respect we give to wine appreciation in the west. Their Sake Expert is Australian Wayne Shennen, who also delivers sake education sessions at industry events. According to Shennen, culturally you’re not supposed top up your own sake, so it is custom to keep an eye on your table-mates while they keep an eye on you.

Shennen further advises that this beverage is best consumed at a “slightly colder than room temperature” and debunks the myth that sake does not create a hangover, especially considering someone else is constantly topping up your drink. Though sake is comparatively free of hangover-causing congeners, the cause and effect varies by individual, amount consumed and the quality of sake ingested. “My personal experience is that my hangovers are smaller with the expensive stuff,” is what Shennen had to say on the matter.

Refine your search for the required area/suburb and select Japanese cuisine to discover sake restaurants and bars near you.