From March to August, Tasmania will play host to local and international culinary legends including Alain Passard, Dominique Crenn and Christian Puglisi, as TasTAFE Drysdale presents the ‘Great Chefs Series,’ a collection of unparalleled degustation dining events hosted in Launceston and Hobart. 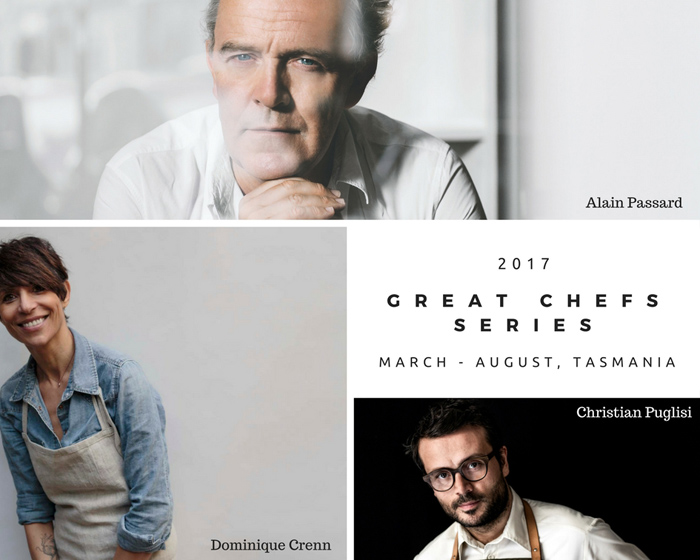 With the calibre of the Chefs involved it seems entirely befitting that the festivities are due to commence at the beginning of the World’s 50 Best celebrations in Melbourne.

Each event shall showcase Tasmania’s widely celebrated, exceptional and unique produce, as the Chefs involved spend time prior to the dinners to learn from local producers, growers and winemakers to develop their menus.

The visiting Chefs bring years of excellence at the highest service levels to Tasmania:

To commence the series, Chef Passard will be based in Launceston for approximately eight days whereby he and his sous Chefs from Arpege will work with TasTAFE Drysdale apprentice Chefs in delivering a four-course lunch on Wednesday, 29 March at Josef Chromy Winery, Relbia and a ten-course degustation dinner on Saturday, 1 April at TasTAFE Drysdale campus in Launceston. Chef Passard will also be delivering an intimate private dinner at Peacock and Jones in Hobart on Thursday, 30 March.

Dominique Crenn and Christian Puglisi will travel with their kitchen teams and together with the apprentice Chefs from TasTAFE Drysdale will deliver a ten-course degustation dinner each. Dominique will partner with Goaty Hill Winery on Saturday, 8 April and Christian will match his menu with a selection of wines from Tamar Ridge Winery on Wednesday, 12 April.

Throughout April to August, six Melbourne and Sydney based Chefs will visit the Tasmanian shores, each spending time mentoring the TasTAFE Drysdale students and developing a unique seven-course degustation for the public. Visiting Chefs to Launceston include; Guillaume Brahimi, Phil Wood and Mike McEnearney and Hobart based David Moyle, whilst Jacques Reymond and Mark Best will make the pilgrimage to Hobart.

The events provide the opportunity for TasTAFE Drysdale to take part in an exceptional vocational experience, delivered by the highest possible culinary leaders from around the world.

Tickets and further information for these events can be found at www.greatchefsseries.com.au.

Photo of Alain Passard thanks to Douglas McWall.