Fundamental French Cooking for the Home 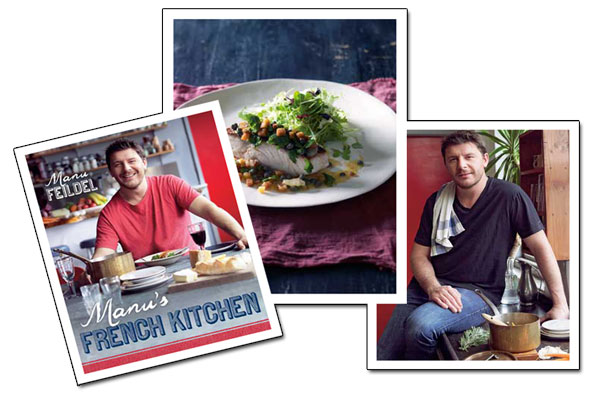 Manu Feildel’s cookbook, “Manu’s French Kitchen” is a wonderful exploration of delectable foods and insightful tips. Most people have an idea of French food being fussy and pretentious but this cookbook features an array of simple, dishes and ingredients that people have access to everyday. Hearty, humble and soul-satisfying, it’s a great way to get a taste of France.

Having been born and raised in the north of France, Manu’s upbringing and family have always centered around food. His mother being his biggest role model, you can expect to see lots of recipes in the book influenced by her home cooking. So much so that when paging through “French Kitchen” you’ll feel like an honorary member of the family at the table as you learn about each story behind the recipes from the personalized notes atop the pages.

What could be more soothing and restorative than a big bowl of onion soup on a cold winters day? Or a rich braised rabbit with speck and mushroom served with a side of comforting mash or creamed polenta?

The book is divided up by five sections; salads and entrees, soups, fish and seafood, meat and poultry and desserts. It’s all about simple, every day cooking and very rarely (if at all) you will find a recipe or technique too hard to master. Even though meals are simple, don’t expect to find short cuts in this book like using processed food to created “quick and easy meals.” Manu stresses the importance of making everything from scratch as a basis for good cooking.

There are helpful tips and general cooking techniques throughout the book which is a great way to enrich anyone’s cooking skills. A two page spread dedicated to making different kinds of stock will not only provide the basis for some of the recipes in this book but also every day cooking adventures. A rich red wine sauce in your repertoire will be versatile in its uses and surely impress your guests.

Most recipes will suit everyone’s tastes with the exception of Snail and Fennel Pies being slightly on the more exotic end- and even that is tastefully prepared. There is a wonderful array of foods from the sea, the skies and land so you’ll find something here for even the pickiest eaters.

The beautiful photographs throughout the book exude a warmth and love that carries over into the recipes. Well balanced pictures of food and people give this cookbook depth and heart, something which also reflects the dishes inside it. Visually the vibrant and brightly colored photos of the completed dishes will trigger a yearning to taste and savour them, making you rush into the kitchen to try.

French Cooking for a Lifetime

Manu’s French Kitchen is a gem of a cookbook which is recommended to anyone who loves French cuisine or wants to get a fundamental grounding in it. Readily available ingredients make this book useful and an enjoyable companion on the kitchen year round. In the end, the reader gets simple and delicious food and the knowledge of preparation techniques that can be used for a lifetime of cooking.