In 2008 the hardcover “Italian Local” struck a chord with cooks who appreciated Tobie’s produce-driven approach with an emphasis on traceability, his dishes designed with Italy in mind but adapted to suit Australia. Getting to know your local farmers and providores, a key theme lining these pages, all part and parcel of verifying the origins of your produce and how it was processed.

For those who didn’t pick up Puttock’s cookbook the first time around, "Italian Local" has been re-released by Penguin Australia in softcover. It stands distinguished on the shelves not by Tobie’s proverbial cherub-like visage (that he’s recently juxtaposed with a dark, mafia-style poster image promoting his restaurant, The Kitchen Cat), rather by its tantalizing photographic image of Maltagliati with amatriciana sauce. 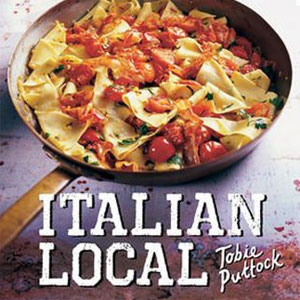 Italy is integral to this Australian chef’s repertoire since author Tobie Puttock travelled widely throughout the inspiring boot-shaped country in his formative years and intermittently ever since. The front cover image of his Maltagliati dish (meaning badly cut in Italian) seems to signify Tobie’s style, taking tradition and putting a spin on it.

The gist is that Italian chefs typically take the odd shaped noodle rejects from pristine batches of ravioli and tortellini and use them for this recipe; however, Tobie has become such a fan he confesses to purposefully creating abnormally shaped pasta noodle anomalies just for his own Maltagliati pleasure. I like the Maltagliati story because it’s like "the little noodle that could" acknowledged, adopted and modeled by Tobie – an ingenious reproduction that others typically overlook.

In introducing his recipes to readers Puttock’s book is full of little secrets, and he offers some enriching backstory reflecting his priorities and passions in the kitchen throughout. Tobie is known to reflect on his travels in Italy describing “early morning strolls in Florence when the tourists were still sleeping… with little three-wheeled carts speeding around delivering vegetables, seafood and other items to the restaurants in preparation for their day’s service.” But what shines through in “Italian Local” is that open-minded spirit of the traveller remains in Tobie whilst focusing on recipes that revolve around the Australian experience.

One theme in “Italian Local” is the value in befriending your local greengrocer, one example being Puttock’s own relationship with his local potato man, Michael Mow. “Like all living things left to the vagaries of nature, pototoes can be quite temperamental… [so] ask for their advice,” suggests Tobie. (The vendor, not the potato.)

Puttock’s ideas shine through in “Italian Local”, giving us helpful tips on cooking delicious food in a sustainable manner. Throughout this book we come to know that he loves animals and has a particular soft spot for pigs, establishing that eating Wessex reared Saddlebacks actually helps to save them from extinction. We discover he opts for organic free-range chickens because the “just organic” kind may have been given organic feed while caged (hence, they were less happy). Furthermore, our author promotes sustainable fishing and how to source seafood as such – again, traceability being an important Tobie Puttock theme.

Tips from Tobie also include home economics, placing importance on getting to know our palette because “what sets your tastebuds on fire doesn’t necessarily come with a price tag.” Puttock tells a cheesy tale emphasizing the importance of trying different styles to find the one you really like, “I’ve tried cheaper, less mature Parmigiano Reggiano for example that I’ve liked so much more than the aged stuff with a premium price tag.”

There’s freedom in his pasta recipes, not just in the elements he includes in the ingredients but in the choice he allows when putting it all together – it’s up to you, go grassroots or opt for the Tobie alternative. Overall, Puttock puts together a killer combo in “Italian Local”, including varied recipes you can build a meal from any time of day. As a bonus, akin to his other books, healthy recipe variations by Sue Shepherd are included for those with food intolerances.

Finishing off this run of “Italian Local”, the success and appeal is not only the Italian food with Tobie’s twist. We appreciate that additional dose of personality and his educational tales from a chef who’s been inspired and gives it back, maintaining “there’s no excuse for fast food.”

Want to know more about the author? Read more in our blog Q&A with Tobie or in Tobie Puttock’s chef profile bio brief.