A Peek Behind the Curtain with John Fink 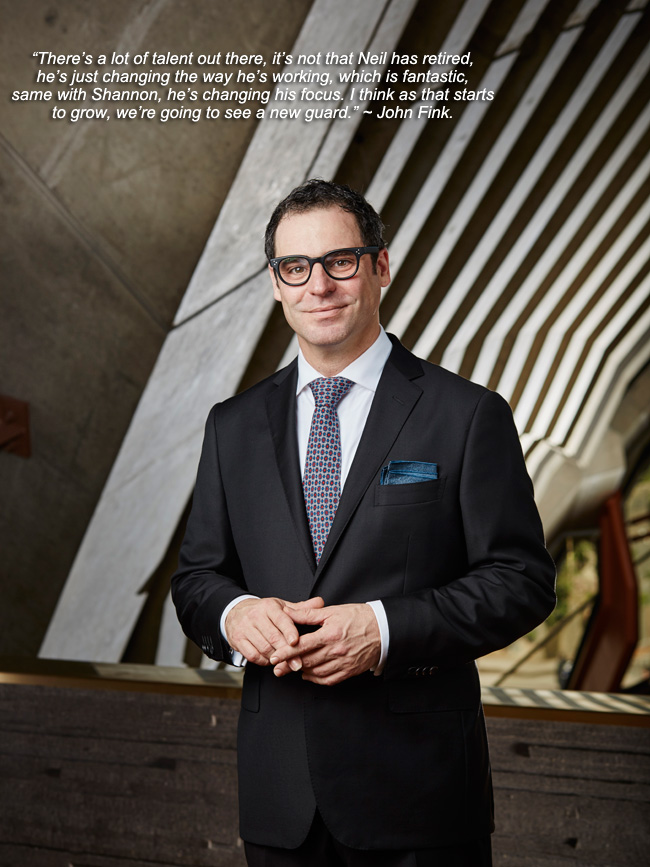 Ever wondered who makes the moves behind Australia’s top restaurants? Take a peek behind the curtain as we catch up with Fink Group Creative Director and filmmaker John Fink. The Fink Group’s restaurants have been a staple on national and international top restaurant lists, resulting in a trophy cabinet that’s ready to burst. Perhaps the most well-known of the group’s venues is Peter Gilmore led Quay; though there are a number of other exceptional, stand-out venues lining the east coast.

We ask John about the Australian culinary scene, film making, cooking at home and Christmas dinner. 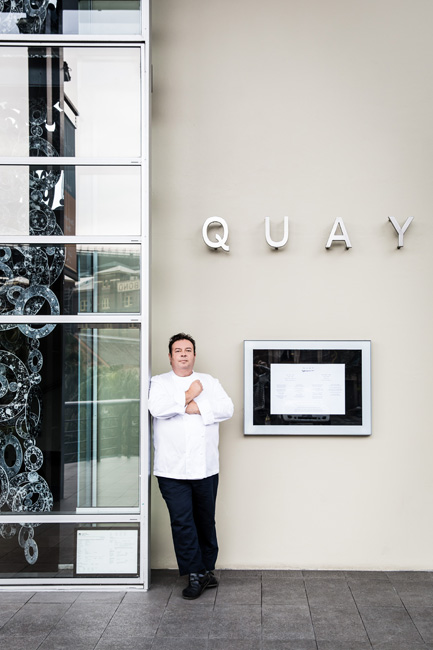 Peter Gilmore outside of Quay. Photo: Nikki To.

AGFG: It looks like you’ve got a really great support system in your parents and a couple of great mentors who have positioned you to be creative in life. What do you draw on from your parents?

Fink: Mum’s a filmmaker and Dad is obviously in the restaurant game, so I learned different things from each. My Dad was working with his Dad, so it’s almost by osmosis. We work very closely, we’re in the same office, so we work very closely together on a daily basis, it’s very connected.

AGFG: How does it go at Christmas time, who ends up catering?

Fink: Generally Dad’s down the South Coast around Christmas time, I generally try and keep out of trouble’s way. If we do have a do, we’ll put a paella on or have a barbeque and just sit around and relax. Nothing too stressful.

AGFG: You’re lucky to open a newspaper in Sydney without you guys being on one of the pages, but one thing that goes a little bit unnoticed in the industry is how much you actually do for the children’s hospital and Cure Cancer, even Oz Harvest and the support that’s there, does that come from the family aspect of the group?

Fink: It’s very much a part of the fabric of the Fink family, to engage in social activity. It’s just part of the fabric of what we do. It’s not just raising the money, it’s also the engagement in society, on a personal level one of the charities that we continue to support is the Cambodian Children’s Trust. We’ve continued to stay involved in CCT along the way, it’s really rewarding; it’s not just a matter of having a dinner party and putting your hand in your pocket, you’re actually heading over there and putting your shoulder to the wheel. It’s really, really rewarding. 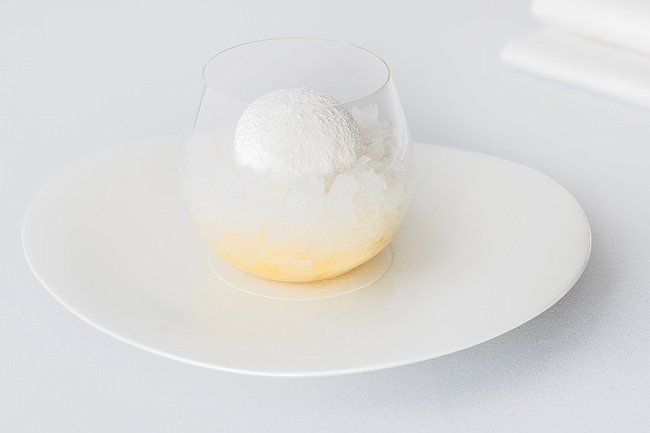 AGFG: Looking a bit more internationally, is it a concern that we’re losing a few at the top of the industry? Are we not investing in our own guys enough?

Fink: No, I think there’s an ecology to the Australian dining scene, Neil Perry is probably the most recognisable Australian Chef, he’s done a deal with UPG [Urban Purveyor Group], Shannon’s [Bennett] done another deal, I just see it as a part of the ecology of the dining scene and the fine dining scene because there are some kids now that have just got so much energy. Look at Saint Peter that guy’s [Chef, Josh Niland] still to have his 30th birthday. There’s a lot of talent out there, it’s not that Neil has retired he’s just changing the way he’s working which is fantastic, same with Shannon, he’s changing his focus. I think as that starts to grow, we’re going to see the new guard, they are already at the wheel but we’re just going to see it get better and better, it’s going to be a refreshment of the scene and a changing of the guard. I’m all for it. I’m looking forward to it.

AGFG: When you go away do you try and get overseas?

Fink: My next holiday is sort of a working holiday, I’m going to Battambang [Cambodia], either that, or just head down the South Coast, we’ve got a little chunk of land on a river down in Eden.

AGFG: How do you find down time?

Fink: These days I really try and get home at night, because the nature of my job’s changed quite a lot, I don’t have to be in the restaurant all the time, I’m certainly in the restaurant as much as I need to be but I’m not on the pans and I’m not on the floor. I just like to go home and cook dinner, I love it, I love cooking. On the weekend, I’ll go to one of the organic markets and get a whole bunch of gear, I’ll usually pick up organic free range chicken bones and punch out a really big stock or if I can get two days off in a row I’ll just go bush for a while. 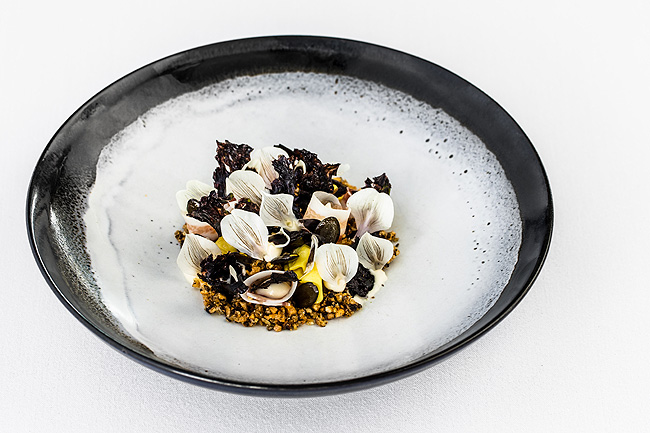 AGFG: Within the group that you’ve got what’s one of the best experiences you’ve had at one of your restaurants?

Fink: It’s hard because you can’t have favourite children, each restaurant delivers a unique experience. It’s more about the company you keep than where you’re eating. I went out one night with Steven Snow, Sam Christie and James Ingram, we were going to get, I think it was Chinese or Lebanese, we met for a beer and I said I know where we’ll go, so we went to Quay. It was hilarious, we could have gone to Chinese or we could have gone to Quay, but it was the company, we had a great time, great conversation, we all worked in the industry, we connected on a friendship level very strongly, it was a lot of fun. 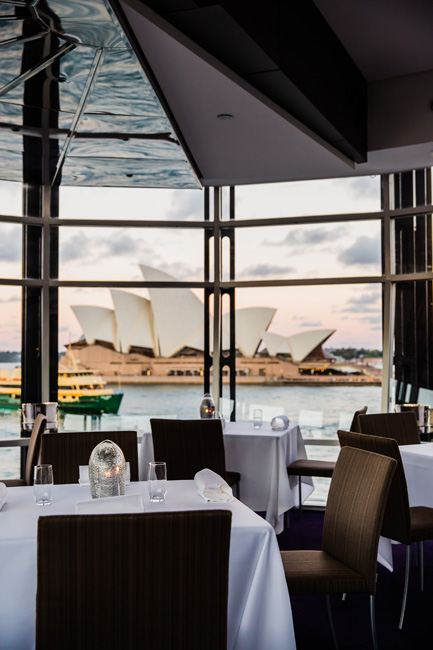 The view from Quay. Photo: Nikki To.

AGFG: As a filmmaker are you working on anything at the moment?

Fink: I’ve just finished shooting a film recently, which has just reached the tail end of post-production. It will be hitting the festival circuit next year, it’s just a 12 minute short film but it’s a good film, it’s on dementia, it’s a dramatic short, it’s a big challenge for me because I decided I wanted to make a short film with feature film sensibilities. Everything about this film is thinking big. I don’t worry about what people think, I just get out there and do it, if it’s a good film, it’s a good film, and if it’s not, it’s not. There are so many factors to film making, it’s like cooking, you can have all the ingredients but something can always go wrong.

AGFG: We now have a Brisbane outlet, are there any more coming?

Fink: No, I’ve got no inclination to hit Melbourne at all. I don’t have any inclination to leave the East Coast of Australia, Perth is just way too tricky on the timeline, because you lose so much time just getting to work with the time shift and everything. It’s a long commute. Darwin is still a small town, even though there is a lot of commerce going through there. It looks like we popped up overnight, we had two little restaurants now all of a sudden there’s seven, but there was three years of development going on before anything happened.

Fink Group restaurants can be found throughout the East Coast, from Quay, OTTO, The Bridge Room, Firedoor and Bennelong in Sydney, to OTTO in Brisbane and Beach Byron Bay in Byron Bay.