Spectate the majestic seas of the south

Every winter, South Australia plays home to migrating whales returning to warm water shores. A spectacular sight to see, these majestic mammals entertain the crowds by frolicking in the waters with newborn calves, attracting thousands of visitors who flock from near and far. South Australia’s far west coast is famous for its land based whale watching locations, along with the Eyre Peninsula, where you can sit on the rocks and watch the action of aquatic life unfold. 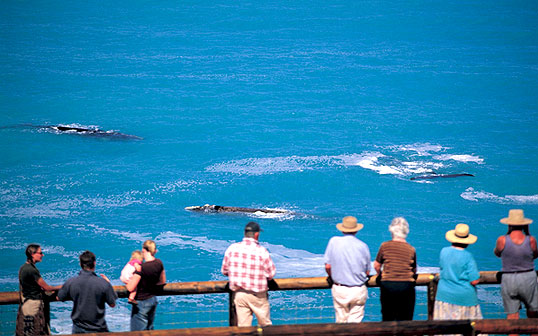 Where can I go whale watching in South Australia?

To experience a memorable and unique whale watching experience, head to the Eyre Peninsula’s Head of Bight, overlooking the Southern Ocean’s crashing waves. In early winter, whales journey to the peninsula to give birth, with bull whales appearing in the middle of the season to attract a mate, often seen slapping their tails on the surface. The first whales are often seen in the Eyre Peninsula area around wintertime, from late May to early June. Once calves are born, they are spotted leaping our of the water, playing and copying their mothers. Additionally, sea lions and sea eagles also come into the peninsula around this time of year, adding to the majestic feel of natures calling.

If you wish to take a tour to watch the whales up close, head out from Fowlers Bay on South Australia’s Nullabor on a boat, where you can observe the whales by sea.

For more information read up on whale watching around Australia.