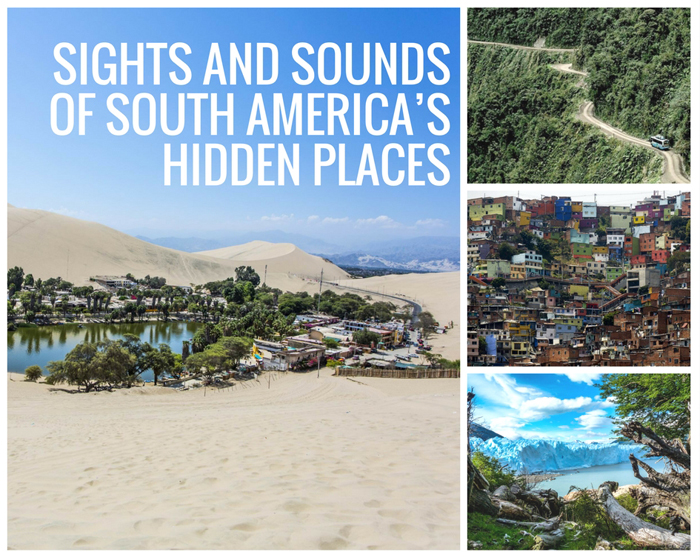 The continent of South America sits boldly on many bucket lists, capturing people’s imagination in a myriad of ways through the sheer number of things to see, do, touch and taste. Something deeper though, appeals about its wild jungles, pulsating coastline and ancient monuments, there’s a wildness about it and a sense of adventure attached that prickles our natural curiosity. Remember, this is the ground that Che Guevara walked on, that Escobar pillaged and Gabriel Garcia Marquez pondered and wrote about. Sure, Machu Picchu is deservedly one of the seven modern wonders of the world, but after that, it’s time for a real adventure.

You know that moment when a cartoon character stumbles through the desert, dripping with sweat and dragging their feet when they suddenly spot a luscious palm tree and tropical pool off in the distance? Hawaiian music starts playing as they start running toward their salvation, only to find that it disappears when they arrive. Well, in Huacachina Peru, such a place actually exists and better still, aside from sitting by the lagoon with a cocktail, the most popular activities here are sandboarding and dune buggy driving.

When thinking of South America, glaciers are not necessarily the first thing that comes to mind. Mostly a place where tourists can stay while visiting the monstrous Perito Moreno glacier, El Calafate is also an entry point of sorts to explore much more jaw dropping scenery in the area. Bright green vegetation and mountainous terrain, contrasted with the clearest blue water and pristine glaciers await. The stuff of travel magazine covers, lottery advertisements and daydreams.

Once fairly judged as the most dangerous city in the world due to the influence of Pablo Escobar, Medellin has made a comeback over the past 20 years. While residents are still divided on the Escobar topic, tours take people through some of the locations of the well-known events of Colombia during the famous drug baron’s time. Take a look at the sculptures in Plaza Botero and soak in the culture, or if that sounds boring head off to raise some pulses with a paragliding expedition.

Also known as North Yungus Road to the many locals who see the journey as part of their daily routine, ‘El Camino de la Muerte’ claims an estimated 300 lives each year, though it must be noted that more than 25 000 tourists bike the journey during that time. Riders experience the cloud forest, a section that feels like riding through the clouds, then there are views of passing cocoa fields, waterfalls and captivating views of the Andes Mountains. The ultimate scenic bike ride, though legitimately dangerous.

In Uruguay’s energetic capital of Montevideo, curious travellers can find Cuidad Vieja, the ‘old city’ to the East. Walk the ancient streets taking in the architecture, visit the pretty church in the main square and feel the lively atmosphere from the vendors and street musicians. Of course, after Ciudad Vieja there’s the rest of Montevideo to get to know.

Are you ready for an adventure yet?