The first time that I met Peter Douglas, one of the genuine doyens of Coonawarra winemakers, was in Hobart many, many years ago. He was thoroughly enjoying the meal in one of the best seafood restaurants in a seafood capital, but the food didn’t really go with the great reds he was there to show off. 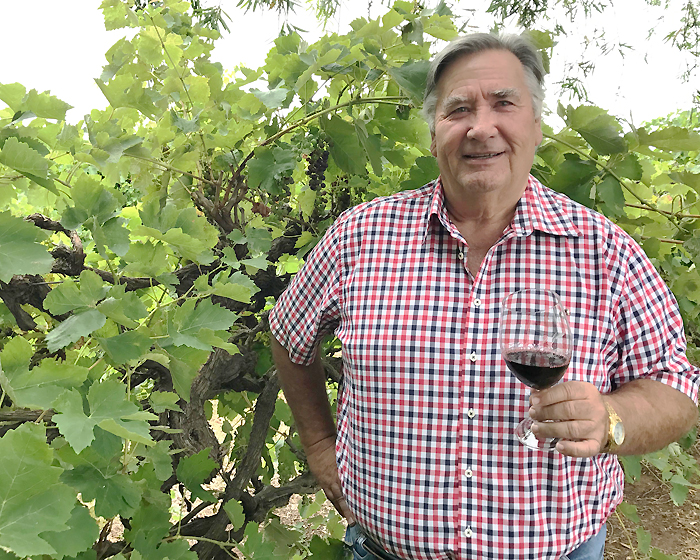 Peter Douglas ... making wines for DiGiorgo Family Wines, which has wrested a historic niche of Coonawarra.

I met him again a few years later, in his then homebase of Wynns Coonawarra Estate, where the food was much more up the alley of the superb red wines he was producing. Yet he was still a bit twitchy.

It was harvest time. And he confessed he was only in the dining room talking to scribblers because he’d been ordered to, because that was the way of the world for the modern corporate winemaker.

So we alighted to the winery, where he was much happier. And we watched and tasted premium cabernet grapes as they were crushed, and he told me of his great love for the Coonawarra district and the fabulous red wines it produced.

Peter long ago parted with the corporate world and Wynns, but, after stints in California and Sicily, returned to Coonawarra where he has worked with several smaller concerns, mostly on a consultancy basis, as well as setting up his own winemaking operation.

One of the companies he has made wine for is DiGiorgo Family Wines, which was eventually established in Coonawarra by Stefano DiGiorgo, who migrated from Italy in 1952 and settled on South Australia’s Limestone Coast.

In 2002, the DiGiorgio family purchased the fabled Rouge Homme winery, the second oldest in Coonawarra and a truly iconic cog in the history of the Australian wine industry.

Somewhat ironically, the Rouge Homme winery and its surrounding aged vines had at one stage been the property of Southcorp, which had owned Wynns during some of Peter Douglas’s time there as chief winemaker.

If he had a wry smile as he entered the DiGeorgio operation, I’ll certainly forgive Peter, whose familiarity with the district and his passion for its dry reds certainly comes through in the latest batch of wines I have tasted.

The wines are, quite simply, outstanding and exhibit true varietal character and genuine regionality.

Di Giorgio Family 2015 Coonawarra Cabernet Sauvignon ($26) — I really like the typically elegant intensity of this cabernet, and its particularly fine structure, something that typifies Coonawarra. It’s very nearly ready to drink on release — that is, right now — but I’d suggest that it’s also very worthy of medium-term cellaring. Five or so years of bottle maturation will soften the palate and the wine’s great length will deliver very desirable complexity.

Di Giorgio Family 2015 Coonawarra Emporio ($26) — an elegant dry red blended from merlot, cabernet sauvignon and cabernet franc. Few Australian regions can deliver a Bordeaux blend of this quality, but Coonawarra can, especially in the hands of someone such as Peter Douglas. This red is already soft enough to drink and enjoy, especially with a hearty stew, but short-term cellaring certainly won’t go amiss.

Sandalford 2017 Margaret River Classic ($15) — this blend of semillon and sauvignon blanc is indeed a Western Australian classic: a crisp, flinty dry white that you can comfortably drink on its own or with something like a plate of oysters or a lovely fresh piece of grilled white-fleshed fish such as bream. All you’ll need with it is some green salad and a wedge of lemon. Just keep it simple and don’t over-complicate with a richly flavoured sauce which will tend to smother the combination.