AGFG: Your last book became part of the Friday night cooking ritual for many readers and your response was to pare down the cooking time in Jamie’s 15-Minute Meals – these are leaner, tougher, and fitter recipes. How can weeknight cooking that’s this quick inspire us and impress our families?

JAMIE: I’d like to think that it’ll impress people simply because you can put amazing food on the table in such a short space of time, and make it look great, smell great and taste great.

I’ve been getting great feedback from people both in Australia and the UK – they started out trying a couple of their favourite recipes from the book, loved them and now they’re using it most nights… it’s fantastic and humbling.

JAMIE: I just hope that people enjoy cooking from it because I put so much time, energy and passion into my books that it’s just wonderful to get feedback. I never sit back and think ‘I hope this sells millions of copies’ – it’s more important to me that people treasure the books, use them, get inspired to cook more and hopefully start creating their own recipe ideas.

AGFG: Since you’re Jamie Oliver, the likelihood that 15-Minute Meals will be a reader’s first attempt of one of your recipes is slim to nil. However, if it is time to pop a new bookworm’s cooking with Jamie cherry, which recipe is “the one”?

JAMIE: Wow, it’s pretty impossible to choose. If you’ve never cooked one of my recipes before, then I’d say not to try racing against the clock the first time. I had a 76 year old lady come and see me last week and she was disappointed because she’d tried one of the 15-Minute meals for the first time and it had taken her 18 minutes. I told her that it was amazing for her first time and not to worry.

Loads of people have done them in 15 minutes. The more you do them and get into the mindset, the quicker you naturally get. If I had to choose, I would say that the ricotta fritters are hard to get wrong.

AGFG:Bringing everyday food to the next level encourages cooking within the time crunch, allowing no excuses. You’ve heard it all before, what’s the biggest cop-out people use to avoid cooking and will you tell us why that’s pure bollocks?

JAMIE: I’ve heard them all. ‘I don’t have the time.’ ‘Cooking from scratch is more expensive.’ ‘I don’t know how.’ None of these are decent enough excuses, in my eyes. If you’ve seen any of my live shows, you’ll know that it’s possible to make a pizza from scratch faster than ordering a takeaway pizza and having it delivered. And, your homemade pizza will taste better and cost less – fact.

In terms of cost, pretty much all of the recipes in the 15-Minute Meals book come in at just $6 AUS per head, which is not expensive. If you don’t know how to cook, ask a friend to teach you and help you out. 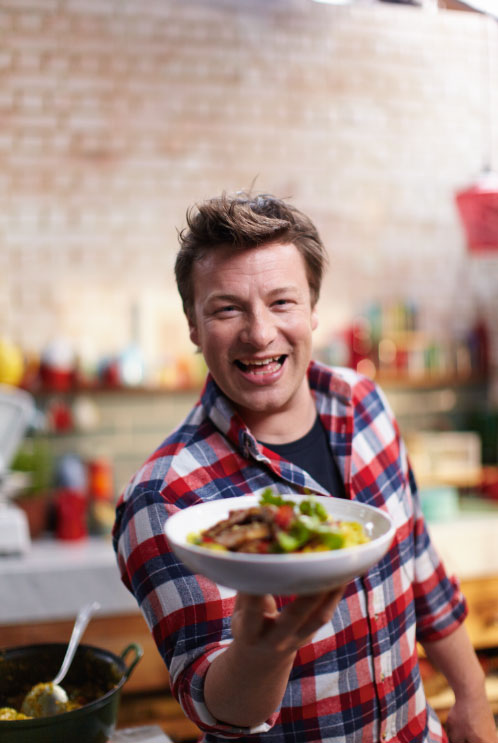 AGFG: Kitchen organization is key to this fast and fun cooking business and you maintain ‘there’s no mucking about’ when making food during the work week. When we do pull our finger out, can you define organized (so that we get it right).

JAMIE: Sure. The key to making 15-Minute Meals work for you is to have all your ingredients and kit ready before you start. You also need the right kit. If you don’t have the kit, you can absolutely still make the recipes and they’ll still taste brilliant, but it’ll take you longer. Good kit, these days, isn’t hard to get hold of and it isn’t expensive.

As I say, most of the feedback so far has been amazing but occasionally you get someone saying, ‘Oh, I tried it and it took me 40 minutes.’ But when you actually ask them how they did that they’ll say, ‘Well I didn’t have a food processor so I used a chopping knife and I didn’t read the instructions properly so I hadn’t boiled my kettle.’ And the list goes on. No wonder it took longer.

AGFG: There’s got to be more to it than just being organized… what’s the other trick?

JAMIE: No other trick. If you’re watching the TV shows on Channel 10, you’ll see that there’s no trick to it. There are also people uploading their 15-minute meals on YouTube – home cooks of all ages and abilities.

AGFG:In 15-Minute Meals your meals average at about 560 calories and the recipes are birthed with a nutritionist present, rather than as an analyst at the end. Why do feel you feel it’s important for cookbook writers to work closely with a nutritionist and does this impede your creativity as a chef?

JAMIE: It’s the first time I’ve written a book with my nutritionist on my shoulder the whole time, but I thought it was hugely important with this book – something that people could and would use any day of the week – to have a really good nutritional balance.

All of the meals absolutely work nutritionally as adult’s main meal of the day. It’s not a diet book but it’s not going to make you overweight either. One thing it didn’t do was impede me as a chef; in fact, it made me better as a chef because if you’re having to cut back on the salt or the fat, then you’re using your creativity to add flavour in different ways.

AGFG:What can the kids take from Jamie’s 15-Minute Meals?

JAMIE: I’ve heard from quite a few kids who are really enjoying the series and are cooking from the book, so it’s clear that although this isn’t a book ‘for kids’, it’s definitely something that kids can get involved and help with. Just follow the usual safety rules. 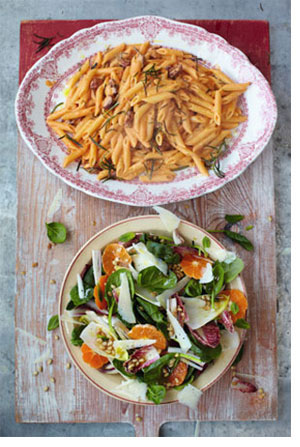 Very close to home, what compelled you to collaborate and establish Jamie’s Ministry of Food Australia, which now includes two active Food Centres in Ipswich QLD and Geelong VIC?

JAMIE: First of all we started the Ministry of Food in the UK and we now have 6 centres here, funded by a mixture of local health organizations and local councils. A few years ago we had a visit from The Good Guys and they were really blown away and wanted to do something similar in Australia.

Now, I choose my business and charity partners very carefully because a lot of the time you get people just wanting to do things for their own reasons, but The Good Guys were really very different – they put their money where their mouths were.

They pledged support unselfishly and they’ve been an absolute privilege to work with. I visited the Ipswich Centre in March and it was truly inspirational. I get regular reports from Geelong and that centre is doing amazing work, too. It’s something that I’m hugely proud of.

AGFG: It’s been 10 years since you founded Fifteen restaurants, supporting unemployed youth in need of a break. You tap into their talents with a passion for good food and promote a hard work ethic. You’ve even helped establish work experience opportunities with top-end restaurants such as Jamie’s Italian, Odette’s and The Fat Duck. Have you always been philanthropic and what fuels you to continuously align your brand with community initiatives directly related to what you believe in?

JAMIE: I think I’ve always been generous with my time and resources, but in terms of being philanthropic it really all changed after the first ‘Naked Chef’ series and book. Guilty that I had this success and money, I wanted to do something worthwhile and important with it. I wanted to help people to have the same opportunities I’d been given, and that’s where Fifteen came from.

Around the same time that Fifteen started, I became a father for the first time and that really changes you as a person. You automatically grow up and become more responsible and so that’s where thinking about school food came from.