When you arrive in Mexico to be surrounded by the Spanish language and trying to order your first meal, it can be a little daunting. With the help of our guide to chillies, you can learn to recognise the words and understand the colours, flavours and meaning that they provide to the dish and hopefully avoid burning up with your first taco. We will give some indications of how spicy things can get with reference to the Scoville scale. This is a measurement of spiciness in Scoville heat units, a function of capsaicin concentration(which is the active component of plants belonging to the genus Capsicum). The scale starts at 0 Scoville heat units, which is the rating of a common capsicum and reaches 1,600,000 Scoville heat units with a Carolina Reaper chilli. Pure Capsaicin is rated at 16,000,000 units. 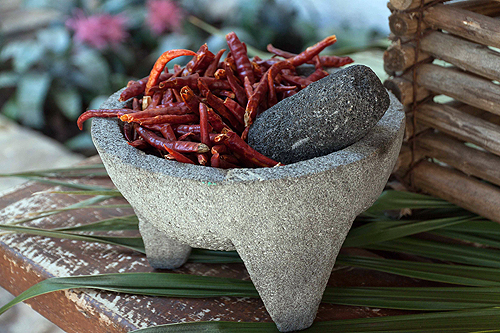 We have introduced our chillies in order of spiciness. We do not take responsibility for incorrect classification and the consequences thereafter, but we do wish you luck in your chilli eating through Mexico. Proceed with caution - spicy chillies ahead!

This dried chilli is popular along with the Ancho and Mulato chillies. In fresh form, Pasilla is known as Chilaca and turns from dark green to purpled dark brown as it ripens. Pasillas are used in tamales and quesadillas, and can often be used instead of the Poblano. In Spanish, Pasilla means ‘little raisin’ which gives you a hint to what it looks and tastes like. If you see this in your travels, give it a try as it will be one of the easier chillies to handle.

Meaning ‘little gourd.’ The Guajillo, Cascabel (rattle) or Catarina (ladybug) chillies belong to the group referred to as Mirasol chillies. It is a russet red, translucent and thin-walled chilli that grows upright, earning themselves an alternative name Mirasol which means ‘looking at the sun.’ The delicate flavour sees it commonly used, especially for colouring.

This chilli is the dried version of the poblano, deep red in colour and tasting of mellow, sweet, earthy flavours with hints of raisin and plum. This is a popular addition to many dishes and sauces in Mexico and has light and dark variations. Most are okay with eating ancho, and many may not even realise it has been added to the food.

These are ancho peppers while they are still green. They look like small, very dark green capsicums that thin out towards the end and the darker they get, the richer the flavour. Their spiciness ranges from mild to hot and are popularly used roasted and peeled before being added to casseroles, soups and sauces. You might also find it stuffed with meats and cheese.

Originally from Jalapa where the chilli was traditionally cultivated, jalapenos vary in heat, from tasting like a green capsicum to having a strong and noticeable bite. You will usually find them fresh and vibrant green, but they can also be red. Jalapeno are a step or two up, take a little caution when eating jalapenos for the first time as their heat depends on cultivation.

These are jalapenos that have been left to ripen and turn red and they are then processed by smoking to give them a distinct depth and a barbecued flavour. These chillies are mostly produced in the state of Chihuahua, but are used worldwide in sauces and salsas, used in slow cooked dishes or to accompany beans or lentils. Give chipotle a try first to test the heat, then lather it on when you realise how delicious it is.

Meaning ‘from the mountains,’ these small chillies are torpedo-shaped and primarily consumed fresh, usually in salsas but are also great for flavouring stews and casseroles. If you aren’t used to eating chillies, try something milder first. 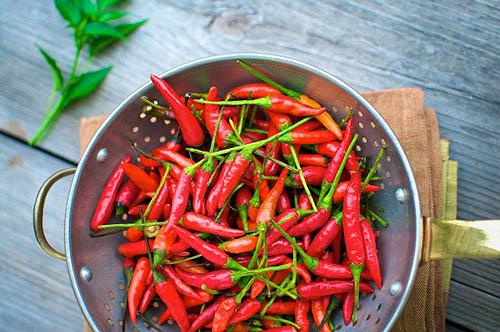 Translating to mean a ‘tree like’ plant with thick woody stems, de Arbol chillies are a delicate, dark-red cayenne variety. Very common in Oaxaca, Jalisco and Nayarit regions of Mexico, you might come across these as Cola de rata, Rat’s Tail or Cow Horn or referred to as Birds Beak chilli. We suggest working your way up to this one.

In Mexico, the Habanero is planted in the south, on the Yucatan Peninsula and is one of the world’s hottest chillies. For those who aren’t confident chilli eaters, it is probably best to stay away from this chilli. If you can handle the heat, there are delicate hints of plum, tomato and apple flavours in this lantern shaped chilli. If food advertises having Habanero, take a bite and wait a while before taking another, as it tends to get worse after it’s been eaten.

Researched and Compiled by Julie Johnson.