Ireland is a contrasting patchwork of continuous greens, blending in and out of valleys, falling away to the verdant mountains reaching skyward as it runs its healing colour to greet powerful coastlines with sudden cliff faces, where brash turquoise waves lap. It’s a country humbled by the folk law of Gaelic mythology carved by its giant predecessors; an ethereal landscape deep with mystery and soul, attributing to its breathtaking aura.

However, Ireland’s tourist reputation precedes itself, luring tourists into the easily accessible ale tours, the abundance of bars filled with gabby locals leading to suspicious leprechaun tours. The authentic identity of the Emerald Isle waits for those nomads seeking to take the road less travelled and discover this country’s truly lucky charm. 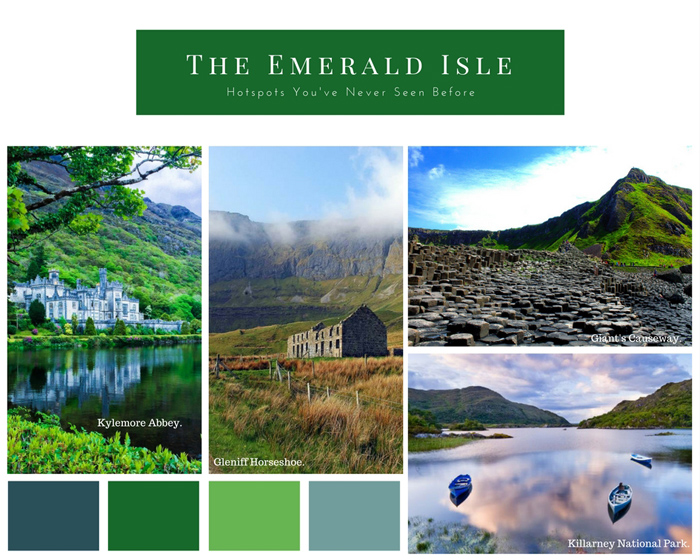 When heading south of Ireland, ditch your four wheels for two and take to the climbing mountains and spectacular views in Killarney National Park, residing near the town of Killarney, close to the country’s most Westerly point. It was Ireland’s first national park, named in 1932 and has since been extended to encompass over 25,425 acres of diverse ecology, lakes and woodlands. This national park has been continuously covered by woodland since the end of the most recent glacial period, approximately 10,000 years ago, with historians believing humans have lived in the area since the Bronze Age of 4,000 years ago.

When visiting the park, be sure to make your way around to see the sought after Lakes of Killarney, Mangerton and the Purple Mountains, keeping an eye out along the way for Ireland’s only native herd of red deer left in the wild. Photo.

Giant’s Causeway is located in County Antrim on the Northeast coast of Northern Ireland, roughly 5 km’s Northeast of the town of Bushmills. This natural phenomenon was created 50 to 60 million years ago when Antrim was subject to intense volcanic activity. Highly fluid molten basalt erupted and intruded through chalk beds to form an extensive lava plateau. As the lava cooled, horizontal contraction occurred, fracturing in a similar way to drying mud, with the cracks propagating down as the mass cooled, leaving the pillar like network of structures seen today. Legend has it that the columns are the remains of a causeway built by Irish giant Fionn mac Cumhaill who succeeded in a fight with Scottish giant, Benandonner, who destroyed the causeway behind him in a feared flee, so Fionn could not follow him. There is even a giant’s boot shaped rock, which is said to have fallen off Benandonner as he made his swift exit. Photo.

Kylemore Castle was built as a private home for the family of Mitchell Henry, a wealthy doctor from London, moving to Ireland with his wife and purchasing the land around the Abbey. Henry soon became a politician for the local County Galway and served the community from 1871 to 1885. The monumental castle residence is unfathomable in its reasoning of size, with stone walls towering over its sprawling lush Victorian gardens. Kylemore Abbey has been opened to the public since the 1970s with the Benedictine community’s donations restoring the Abbey's gardens and Cathedral enabling it to be a self-sustaining estate. Photo.

Allusive by name, The Gleniff Horseshoe is not a horseshoe, but a 10 km round loop of single lane road, just a short drive North from Cliffoney, transporting visitors through a visually stunning journey of spectacular mountain views. Most find themselves taking the loop both ways, seeing just as much the opposite way as they did the first. Unfortunately, hiking access to the surrounds is restricted, however the magic of the Gleniff highlands is easily experienced from the comfort of your car, not just seeing but feeling the presence of the gigantic mountains. Photo.

The Dingle Peninsula is Southwest Ireland’s final hurrah as the countryside plunges into the Atlantic Ocean. Jagged coastlines of wave carved cliffs have created sandy coves creating a terrain at the ever-changing mercy of the elements. Dingle Town, aboard the peninsula attracts an eclectic crowd of artists, craftsman and musicians to its workshops, museums and folkloric festivals. For those eager to stretch their legs and fill their lungs with crisp highland air, explore the peninsula with over 48kms of stretching terrain, some describing the landscape an open-air museum, aplenty with monuments left behind by Bronze Age settlers, Dark Age monks, stone house ruins and Hollywood set remains. 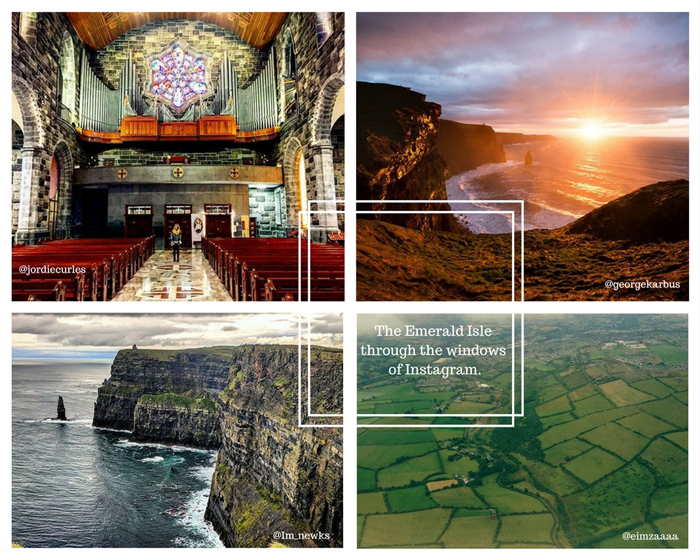 "In the Galway Irish Cathedral.”

"The fairest Isle of them all.” ~ Cork Airport.