It is undeniable that the statistics of childhood obesity in our country are alarmingly high. With processed and manufactured fast food companies aligning themselves to directly advertise to children, it has insidiously taken the decision away from parents when it comes to what their kids are eating.

Visionary company, Death to Nuggets, is a passion project start-up created by Melbourne father of three, Jonathan Pangu. With a focus on re-inventing the way children interact and perceive healthy foods, Death to Nuggets have created whole food themed dinners specifically for kids, offering an interactive and hands on approach to meal time, with an assurance that the age-old kids’ menu item of chicken nuggets are nowhere to be seen. 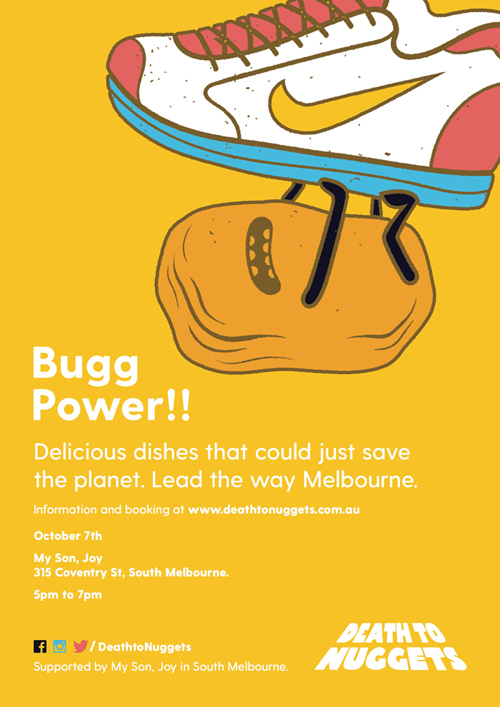 Following the success of their first two events; The Edible Garden and Eating Nemo?!, Death to Nuggets are set to launch their highly anticipated third event, Bugg Power!! which will offer a four-course menu created by Chef Laura Neville, that elegantly incorporates insects.

This latest theme, explores the issue of rising greenhouse gases from the production of livestock and a call for finding alternative sources of protein to livestock.

Pangu explains that raising livestock for meat produces more greenhouse gases than the transport on our world’s roads.

"The idea of insects as an alternative is not new, however, it has not gone mainstream in Western cultures.

"Us older folk are too set in our ways. We’re skipping a generation and talking to kids, they’re still forming ideas and habits around food,” says Pangu.

Enjoyed as a daily food item for over 2 billion people worldwide, bugs are known for their nutritional source of protein, good fats, fibre and minerals, however it is their environmental impact, or lack thereof during production which has sparked the attention of many environmentalists.

"The fact that bovine flatulence is a major cause of greenhouse gas is pure gold when it comes to discussions with kids,” says Pangu.

Hosted by Australia’s foodie capital, Death to Nuggets dinner Bug Power!! will be held at popular whole food restaurant, My Son, Joy in South Melbourne on October 7th. Tickets are $45 per person, which includes kids’ drinks and a glass of wine for adults. BOOK NOW.
Previous Post
A Wine Report: the rise of riesling at the annual Mudgee Wine Show
Next Post
Coming Up Roses with Cinnamon Kisses & 58 other Seductive Chocolate Recipes