If you’re a young traveller keen to see more of the great Australian outback while drinking cheap alcohol and listening to country music then look no further than attending a B&S ball. Short for bachelors and spinsters, a B&S ball is a cherished tradition for young rural Australians and largely consists of dressing in a slightly unorthodox version of ‘fine attire’, donning an akubra and sleeping on the back of a ute. Usually held in a large, secluded paddock, B&S balls are a great opportunity to meet some young country Australians and have a night of partying in the outback. With the festivities beginning in the evening and running through till the sun rises, prepare yourself for a big night. 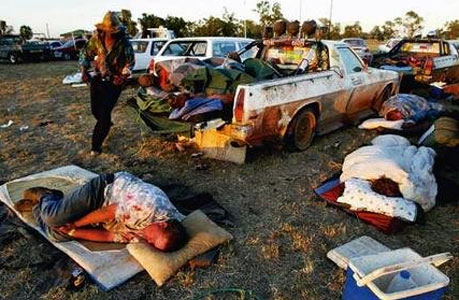 Where are B&S Balls run in Australia?

Originally established as a matchmaking event for young country Australians, B&S balls are nowadays more of an excuse for a good party and a lot of alcohol. Funds raised from the evening go towards supporting the local rural community, charities and assistance organizations. Bachelors and Spinsters balls are run Australia-wide, some of the most notable recognizable being that of the Goondiwindi B&S held in south western Queensland and the Burren Junction B&S in western New South Wales. Rest assured, if you are anywhere in Australia’s rural areas, you will be sure to hear the words ‘B&S ball’ being tossed around excitedly, so ask for directions and join in the fun. Also take note that class or elegance is a rare feature at an Australian B&S ball so don’t be afraid to get messy and loud.