When in Spain, Throw Food! 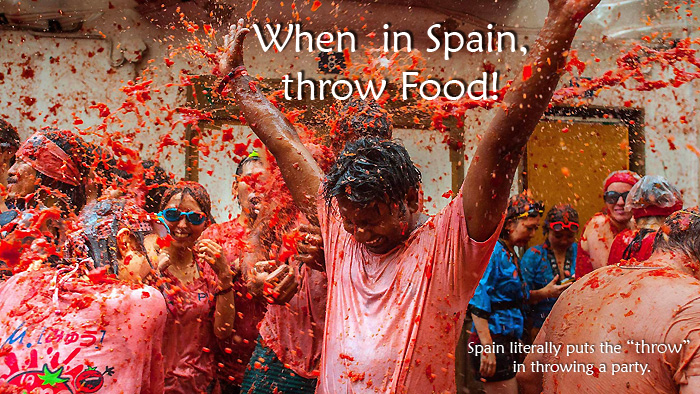 The Spanish certainly know how to throw a good party! From the world-renowned running with the bulls’ festival to tossing tomatoes, a multitude of frivolous fiestas and festivals exist all throughout the country. Even each town is likely to have its own unique events held on special days of the year. In remembrance of the past and in celebration of tradition, the Spanish mark a handful of stand-out food festivals that hit the calendar every year. Should you wish to participate in any of the following events, be prepared to drop inhibitions for going all-out-wild as well as any concerns for cleanliness!

Granted the title as the world’s biggest food fight, La Tomatina is a spectacle to behold. Over one hundred metric tons of over-ripe tomatoes are thrown by strangers crammed into the streets of Bunol, a town near Valencia. Prior to 2013, up to 50,000 people would pack into the town ready to throw tomatoes but since then, restrictions have been put in place to keep festival-goers safe, capped at a total of 20,000 participants. After water guns spray down the crowd, trucks roll through the streets with people on top throwing out armfuls of tomatoes as fast as possible, meanwhile nearby shop owners ensure plastic coverings are held tightly in place to save their stores from the absolute mess that ensues.

After a night spent partying in the town’s heart, thirsty travellers and happy-go-lucky locals climb a mountain five kilometres away to proceed drenching each other in wine for the annual La Batalla de Vino – yes, a wine battle. Dancing to music, festival attendees fill water guns, water trucks, water pistols, buckets and anything else available with beautiful liquid and drench the people around them. The party then descends into the town of Haro for more dancing and of course, drinking.

Commemorating a battle that took place over 200 years ago, the participants of Els Enfarinats re-create a mock battle throwing eggs and flour as well as setting off fire crackers and spraying the foam of fire extinguishers with vigour. The battle begins with a group of married men known as the Els Enfarinats who take over the town, declaring and enforcing ridiculous new rules and fining the townspeople who break them. An opposing group, the La Oposicio, try to bring order back to the town and at the end of the day, any money collected from the absurd fines is donated to charity.

Celebrating the end of the wine harvest in the best possible way, locals and visitors to La Pobla del Duc enter into a huge grape throwing festival. Tonnes of grapes are dumped into the small town from surrounding regions and crowds gather in the town square and wait for the church bells to strike 12 noon to mark the beginning of the festival. Dating back to the 1930s, this comical event began with elated farmers rejoicing at the end of another harvesting season by throwing the rest of the crop at each other. As the town still relies heavily on their flourishing viticulture for income, the festival is just as meaningful as ever.

Just one day of a six-day festival, La Merengada is part of the carnival of Vilanova I La Geltru in lead up to Lent, and so is enjoyed on ‘Fat Thursday’ after which indulgences become scarce. Like the other festivals, be sure to bring a spare change of clothes, because this day is messy! People gather to enjoy a full day of activities, in particular, meringue and cream throwing. Once the meringue is all gone, candy is thrown into the streets to enjoy into the evening, where people then take time to eat a traditional meal from the area called Xato.

Every year, a volunteer or selectee from the town of Piornal dresses up as a literal scapegoat called Jarramplas, wearing armour, colourful strips of cloth and a terrifying and grotesque goat-ish mask. He then proceeds to walk through the town beating a drum, to which the residents rush out armed with turnips to throw as what is believed to be a punishment for stealing cattle. The tradition is centuries old and the origins are somewhat skewed, but hey, it’s another day of fun for the Spaniards. As the day turns into evening, the town celebrates in the best way they know how - with music and a feast.

If you know of any more food throwing festivals be sure to hit us up ateditor@agfg.com.au.