By Leigh O’Connor.
Jesse Freeman should be fat – anyone who can polish off 16 full-sized cheeseburgers in one sitting doesn’t deserve to look like him.
Known as the Burger Daddy for his penchant for all things sandwiched between a bun, Jesse is a competitive eater, powerlifter and social media guru, with more than 321,000 followers on his Instagram account Food Coma Eats. 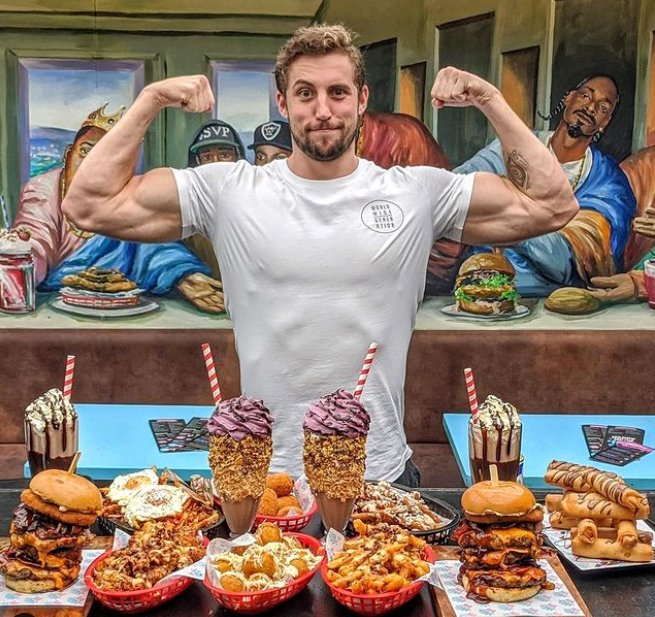 Just one feast for this hunk of a human.
A normal day’s food intake for this gym junkie – who can deadlift 280kg – is somewhere between 4000-5000 calories, made up largely by burgers, green vegetable powder, fresh vegetables and a plethora of protein sources from bars to a humble piece of cheese.
"I started this whole journey as a competitive eater on YouTube,” he says. "For me it was fun, a great party trick that would shock my friends and family and eventually a sizeable following. I always thought of competitive eating as a start to my career, which would enable me to create lasting relationships in the industry, showing my personality and care for my work.” 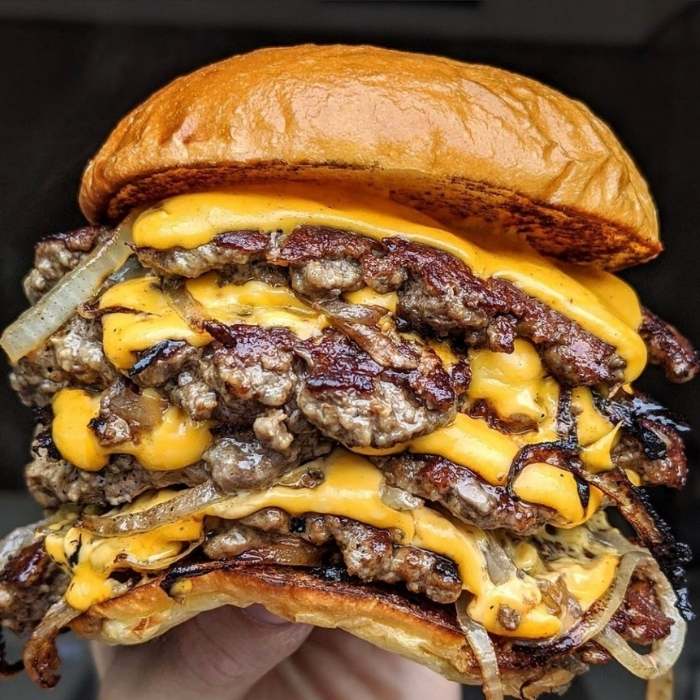 Currently training for his first powerlifting competition, Jesses says the physical workouts are gruelling as he aims to lift the heaviest load possible for his weight of 100kg.
"Every session is built off the back of hundreds of heavy breaths, veins pumping blood on overtime, adrenaline getting sapped out of me with every single movement of my body.
"It also takes quite a toll on my central nervous system, not only am I throwing around weights that would make Arnold proud, the mental concentration that is required to have the correct technique and not snap every bone in my body is immense. I still love every second of it, though.”
Powerlifting was a strange fitness change for Jesse…for the first 21 years of his life, he had never lifted a weight, choosing instead long-distance, endurance-based events such as triathlons.
After becoming ill in 2013, that all went out the window and Jesse had all this spare time and energy with nothing to channel it into.
"I moved onto the gym and nutrition and my understanding of the human body completely changed. I put on 16kg of muscle in three years, defied my own understanding of my own strength and became dedicated to pushing myself every session to become the best.
"Who was I competing against? Nobody. By being the best, that meant I wanted to be the best me, every day in that gym. It took a shoulder shattering injury (literally) for me to find out I wanted to be the strongest person in the room, despite adversity.”
For the first three months after the injury, Jesse trained completely unilaterally (one side separate from the other) and fell in love with the process and efficient movement of the human body.
"As with everything, my obsession grew to the point I was staying up late, reading countless sources of material. It has now been a year and half since the injury and I’m stronger than I’ve ever been – with a 265kg squat, 280kg deadlift and 170kg bench press.”
Jesse says if he was what he ate, he’d be a burger no doubt! 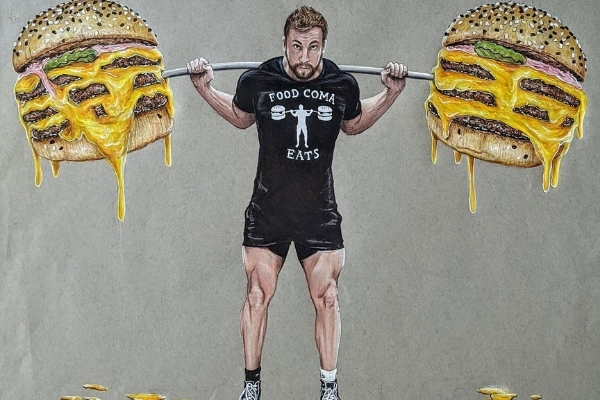 The Burger Daddy…100kg of Jesse Freeman.
"I should be very fat, but I’m lucky in a few different ways (sometimes it is also creating your own luck). I’m tall, naturally lean and hyperactive, my body seems to be able to withstand a serious amount of physical stress, I have quite a ticker from all my years as a triathlete and a vast number of other sports I played.
"I also have an obsessive personality which means when I want to do something, I obsess over the material until I’ve learned what is sufficient for me to be confident enough to make quick, gut decisions, both in the gym and the kitchen. Lastly, I’m 100kg of human – the bigger you are, the more energy requirements your body has.”
So where does this Burger Daddy see himself in five years’ time?
"I bloody well hope to be doing more than just Instagram, I want to be talking at conventions, educating people and providing value to others. I want to have a book and be changing the way people think.
"I want to be an incredible husband to my beautiful (currently fiancée) Kira and I want to have all the time for the people I love; working hard, but not just being busy.”
We’re sure there’ll be more burgers in there somewhere…like the 22-patty behemoth he once devoured along with six cheese croquettes!
Previous Post
This is One Chef Who Doesn't Pull Up Anchor - Paul Leete Celebrates 23 Years at Sails.
Next Post
How to Cook the Perfect Steak with Celebrity Chef Adrian Richardson