"Ever the social butterfly, the Bloody Mary bridges the gap among us all. Where’s yours?” – Brian Bartels. 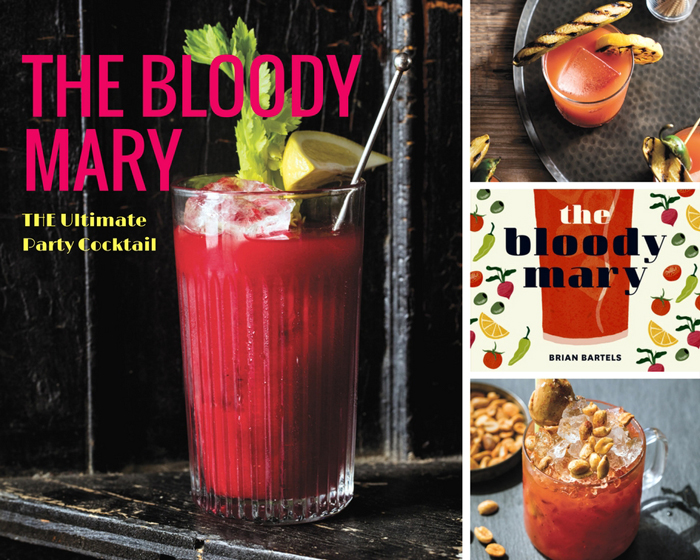 One of the most universally loved cocktails, the Bloody Mary has cured many a hangover since its inception in the 1920s. On Saturday mornings in bars and restaurants around the world, guests order a Bloody Mary to take the edge off the night before, or simply set themselves up for the weekend ahead.

Shedding light on everything from its contested origins and recipe variations, Brian Bartels’ book ‘The Bloody Mary’ offers advice for brunch hosts and more than 50 eclectic mixes, taking the drink outside the vodka box and lifting the garnish game to a whole new level.

A writer and bartender his entire adult life, Brian began working the stick during busy Saturday brunch service at the Great Dane Brew Pub in Madison, Wisconsin. He learnt how to make his first Bloody the hard way, spilling the mix over his hands and wrists instead of inside the pint glass.

"Every Saturday morning I’d enter work – hungover, sleep-deprived – and fumble with ingredients while my manager and fellow bartenders snickered at my inexperienced, gawky attempts to impress.

"No matter what I did, I was too slow, but I was determined to do well. The Bloody Mary was the gatekeeper; it was the Sphinx that guarded the entrance to the world of bartending. To move forward I had to master the Bloody and unlock its mysteries,” says Bartels.

It also taught him that every drinker is unique and along with bartenders, they all enjoy the ‘tweak’ – adding an extra dash of tabasco, a splash of crisp lager or an extra olive … or six.

While the Bloody’s origins are murky to say the least… most agree Harry’s New York Bar in Paris was the likely birthplace in the 1920s. Vodka was common in France and the tomato juice cocktail was gaining traction, Ernest Hemingway was a regular patron along with American soldiers stationed in the city during World War I.

Harry’s bartender ‘Pete’ Petiot is generally credited with creating the cayenne, lemon, black pepper, Worcestershire sauce, tomato and vodka cocktail we know today. Since then, the Bloody Mary has become like a backyard barbeque - everyone thinks theirs is the best!

For a unique spin on this classic, try the PB and J, and Mary with its peanut infused vodka and strawberry jam fusion of flavours. To finish the creation, garnish with crushed nuts, a celery stick dipped in peanut butter and freshly ground black pepper.

The Beet and Sherry Bloody Mary was concocted by Brian’s friend Leo Robitschek, and drinking one is often followed by an impromptu dance party. Amontillado sherry and beetroot juice play very well together in this welcome curveball to the classic cocktail, while a lemon wedge and celery stick garnish makes it a home run.

Alabama barbeque king Chris Lilly turned his talents to cocktails with his take on the Bloody, featuring beef jus, smoked celery salt and lots of smiles and high fives. To make the Barbeque Bloody Mary, save the dripping from your next grill, or use unsalted beef stock to create the smoky, meaty flavour.

Adding a comedic edge to Brian’s collection of recipes and handy tips are strategically placed quotes throughout the book. Perhaps the best that sums up the whole cocktail phenomenon is: "When life throws tomatoes at you, make Bloody Marys.”

With this book, anyone can throw tomatoes and everyone will enjoy the resulting cocktail.

Images and recipes from The Bloody Mary by Brian Bartels (Jacqui Small RRP $27.99).