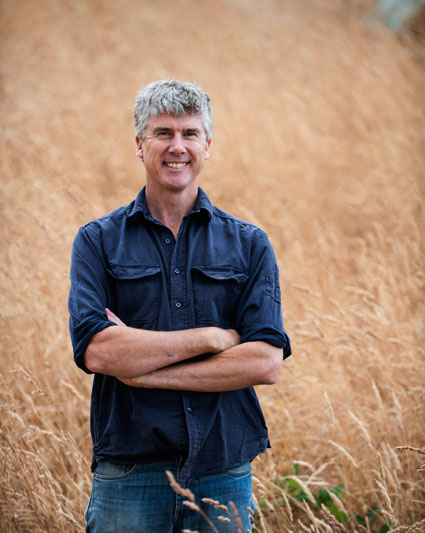 AGFG: On your new (much larger) Fat Pig Farm, one of your early endeavours is building a smoker. What’s on the menu for this little dunny-like hut on the land?

MATTHEW: I want to use this to smoke our own beef, pork, lamb and home-reared birds, but I’m really excited in the longer run to get some vegetables such as chillies, potatoes and tomatoes in it, too.

AGFG: This year you and Nick are fuelling up A Common Ground, your shop venture in Hobart, ensuring it’s contributing to your income stream. What are the main Fat Pig Farm products you aspire to direct-sell at the shop?

MATTHEW: The shop’s been going for nearly 20 months. I supply it with bacon and ham and sometimes speck from my pigs, and we’ll look at adding more products as the garden matures and we increase our livestock at Fat Pig. The idea is that the shop showcases artisan produce from all around Tasmania, not just our own, so we have several brands of cheese, we get walnut oil pressed just for us, source hard to find ingredients, and make some of the things ourselves, such as sloe gin and saffron infused cheese.

AGFG: ‘Gourmet Farmer: Season 3’ will first run on tele during Tasmania’s autumn and winter months. What are the key elements of farm life that you are able to show on TV because you’re shooting at this time of year?

MATTHEW: Every season is so distinct in Tassie. The show was shot over 14 months, so we have been digging vegetables gardens in the hot sun of summer, slipping in mud and water, and bracing for spring winds. Filming outside in Tassie is endlessly exhilarating and fairly unpredictable.

AGFG: This year when you host paddock lunches out of your mobile kitchen, what key produce do you plan to use on the menu and any ideas on the type of dishes you’ll serve?

MATTHEW: We have a decent sized garden on Fat Pig Farm, so we can source everything from tomatoes to onions and garlic to cima di rapa (a broccoli-like plant from Italy) as well as kohlrabi, salsify, snow peas and three colours of carrot. It depends a lot on the season, of course.

AGFG: You’ve uprooted the family’s foundation and made the gourmet farmer livelihood a bit more complex, even adding winemaking to your repertoire. Have you bitten off more than you can chew?

MATTHEW: Yes, every new project demands time, and often some money to get it started. We now also have the geographical difficulties presented by two farms, and so we are in the process of trying to simplify things a little. Most of the time it is just Sadie and I doing all the work, with occasional help from outside (and no big machinery to make things a lot easier…!) We have started too many projects, but I’d rather be giving things a crack than die wondering.

AGFG: Your philosophy is “grow it, kill it, make it… and if you don’t do this, you need to know where it comes from.” When living by your creed, to this day what is your favourite part of the process and why?

MATTHEW: Not the killing. I adore looking after livestock. I think part of my brain is hardwired to want them all to thrive and the animals we work with most - pigs and cattle - are gorgeous creatures that generally have a calming effect on the brain. After that my next favourite is the simple act of digging, planting and weeding, and watching the fertility in the soil improve.

Matthew Evans once trained as a chef before he crossed to the dark side of the industry and became a restaurant reviewer. After five years and 2000 restaurant meals as the chief reviewer for The Sydney Morning Herald, he came to the slow realisation that chefs don’t have the best produce in the land, normal people who live close to the land do. So he moved to Tasmania, where he’s fattening pigs and sheep, milking a bossy jersey cow, growing broccoli and learning how to farm, one small step at a time.