A Taste of Paradise from the 19-29th May

Port Douglas is set to come alive this May as suppliers and artisans combine in a 10 day spectacular of fun, food and festivities.

Port Douglas Carnivale showcases the beauty of the region, using heritage-listed venues like the Sugar Wharf contrasted with the waterfront parks, spectacular Four Mile Beach, and the waterfront marina. It attracts over 20,000 visitors, with the vibrant mix of tourists and visitors really making the region shine at its very best.

The event began in 1994 when the locals created a fiesta around a yacht race. Today, it’s a magical festival held during the last 10 days of May within the seaside resort village and its surrounds. Held over two weekends, the program caters to both locals and visitors. 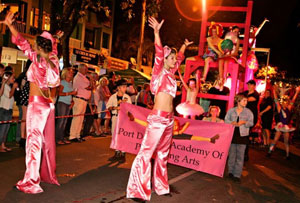 Week One: Every festival begins with a grand parade, and the Macrossan Street Parade is a delightful showcase of the local community attracting around 50 floats and 10,000 spectators. This year’s parade theme is ‘Wonderland’ and the event is followed by the festival’s Opening Gala party at the Sugar Wharf. Local Mossman community member Joel Collinson is credited with coming up with the Wonderland theme and explained to us that “a wonderland is a place or a thing or a scene that you love, thus open to interpretation by all… there are no boundaries to this theme!”

The first weekend also features the Sheraton Mirage Longest Lunch – an excellent excuse for a very very long lunch – the food and wine festival, Food, Wine & A Taste of Port, which is held each year outdoors under the coconut trees at Rex Smeal Park and the Seafood Extravaganza, a traditional highlight. Families can watch the Exemplar Clipper Cup from Four Mile Beach or the Bulls Masters T20 cricketers, check out the creatures at the Wildlife Habitat during Wildlife Wonderland Day, or see arts and crafts at the Airing of the Quilts and the Port Douglas Sunday Markets. On Sunday evening, there’s the popular Stories & Songs around the Campfire in the grounds of the Port Douglas Life Saving Club.

The following week, sports lovers can engage in the Port Douglas Golf Challenge, while fashionistas will enjoy the retailers showcase and wine-tasting at the Sugar Wharf. For entertainment, Neil Murray and the Theatre Sports Competition play live at the Clink Theatre and the finale of the Port Douglas Songwriters competition is a highly anticipated event. Pick a winner at the Daintree Station Bullride Spectacular or in the final race of the Exemplar Clipper Cup! Don’t miss the wonderful, family friendly Four Mile Beach Day held on the second Saturday – super entertainment, beach cricket, sand-building competitions and more. 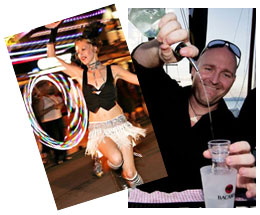 Week Two: The second weekend of the Carnivale program sees the return of popular gourmet events. Fine dining al fresco style and an 8 course degustation menu are a feature of Palates of Port, while the local chefs vie for the title of Port’s best during the Carnivale Food Fight and prepare succulent fare for the Food Fair – a new event in 2011. This year, diners will vote for their favourite eatery during Carnivale in the new competition entitled Which Restaurant Rocks?

If you’re adventurous by nature, Carnivale’s program of sports will satisfy both players and spectators. As well as the competition events, there’s kitesurfing and outriggers to watch. During the last day of Carnivale, USM Events will present the Coral Coast Triathlon, RRR Mountain Bike Challenge and the Great Barrier Reef Ocean Challenge.

Throughout the festival, the Carnivale Club at Sugar Wharf will provide a venue to chill, mingle, and be entertained. In 2011, a new Carnivale ambassador, The Face of Carnivale, will be announced at the event’s program launch on 2 April 2011 together with the winning Song of Carnivale chosen to represent this year’s festival.

Accommodation: Need somewhere to stay when in Port Douglas? We recommend Executive Retreats for Tropical North Queensland’s most luxurious accommodation!

• Mali Mali: Awarded Australian House of the Year, Mali Mali in Port Douglas is the best place to stay floating on top of Mount Somerset. With a 360 degree panoramic view across the majestic Daintree Rainforest to the glimmering Coral sea, it reflects a modern view of tropical opulence. Mali Mali is a place where you can take time for yourself. Find out more…

• Shangri-La, Port Douglas: If you are planning a serious escape Shangri-La in Port Douglas is an exclusive tropical playground where the attractions include lush natural surrounds and the friends you bring. Nestled in a valley of quintessential beauty, this retreat has a stylish and relaxed charm - it is a dream becoming true. Find out more…

• The Beach Villa on Newell Beach: If you need a romantic getaway in the tropics, the Newell Beach Villa in with splendid views of Port Douglas is the perfect place. Located on a quiet idyllic beach the villa is lined by tropical coconut palms. It is all about luxury here. Find out more…