Aussie Delights to Try on Vacation

You’ve got your walk-about shoes, your sunscreen, your anti-wild dingo spray and your list of cheap hotels, but before you book your next Australian vacation, be sure to make a list of the Australian dishes you must not forget to eat while down under. The diet in Australia is as diverse and ethnically influenced as that of America. Immigrants from Ireland, Greece, Italy and Asia have all made lasting changes to the Australian food culture, but some dishes remain uniquely Aussie. 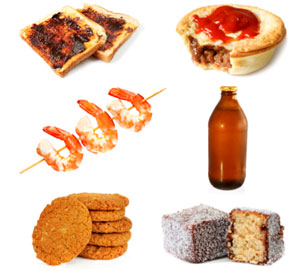 In Australia, most meals are prepared and eaten at home, but grabbing lunch on the run is becoming more popular. Tea time is around 4 p.m. and consists of small sandwiches, cookies or other baked sweets. When doing a hotel search for your Australian vacation, find hotels that offer a complimentary tea time; many Australian hotels do.

While travelling through Australia, you will find hotels, cafes, fast food restaurants, bars and fine-dining establishments in which you can enjoy a meal, but wherever you eat, don’t leave the continent without trying these top 5 Australian foods:

Crocodile and emu are among the most exotic items travellers want to try in Australia, but kangaroo is the most definitively Australian food item you must eat when visiting there. Whether ground into burgers or sausages (“bangas”), sprinkled on pizza or eaten in juicy slabs, kangaroo meat is a lean protein that tastes something like bison – slightly gamey.

Kangaroo are native to Australia. Fans of kangaroo meat maintain that without controlled hunting, their habit of multiplying quickly would soon lead to rampant overpopulation – so you shouldn’t feel guilty about eating them even if they’re cute.

Vegemite is as popular in Australia as peanut butter is in the U.S., but Aussies do not eat it in the same way. Made from the by-products of beer brewing and rich with B vitamins, Vegemite is a strong, yeasty spread that’s best when used sparingly, especially if it’s your first time trying it. Vegemite may be the iconic food of Australia, and you’ll find it served on toast everywhere from cheap hotels to the finest establishments. First-timers should spread a small bit of Vegemite on a perfectly toasted and buttered piece of bread. Some Aussies swear it’s the equivalent of a culinary miracle; at the very least you’ll get a good dose of vitamins to charge you up for a day of sightseeing.

Almost every culture has some version of a meat pie in its culinary repertoire; tacos, Cornish pasties, and meat-filled dumplings all qualify as meat pies in the world of food. However, the Australians have elevated the popularity of a meat pie to the extreme; in fact, many consider it the national dish. There are dozens of recipe variations that can include ground beef, pork, chicken or even kangaroo (now that would be killing two culinary birds with one fork), but as the name suggests, meat is the star of the show. When you check into your Australia hotels, get into the habit of asking which restaurants serve the best meat pies around. Since each cook has his or her own secret recipe, you could probably eat a slice every day and never have the same meal twice.

ANZAC biscuits are born of a sentimental and sometimes heartbreaking tradition. Mothers, wives and sweethearts of Australian soldiers baked thousands of these cookies during World War I. They chose the ingredients for the cookies because of their ability to withstand a long transport with no refrigeration. Typically made from oats and coconut, the ANZAC biscuit’s special recipe calls for syrup or treacle as a binder instead of a scarce and perishable egg. The acronym stands for Australian and New Zealand Army Corps and is a testament to the popularity of the cookie among the troops. Today, ANZAC biscuits still grace the shelves of nearly every Australian grocery mart. Pick up a package or two to keep in your hotel room, or pack them for a long trek – no refrigeration required.

For an authentic Australian culinary experience, end at least one of your meals with lamington. Lamington is two hunks of chocolate sponge cake stacked together with a center layer of whipped cream and sometimes jam, then topped with a chocolate coating and a sprinkle of coconut. YUM! Lamington is to Australia what apple pie is to America, and it’s a dish that one should experience in the country of its origin. You’ll find the treat at most casual cafes and restaurants and even a commercial version in the grocery store.

When doing a hotel search for your vacation planning, take a little extra time to search the area's restaurants. Planning a culinary adventure takes the same type of preparation as any other aspect of travel, and trying foods that are authentic to the region may be one of your most memorable experiences of Australia.

This guest post article was written and provided by Erica Gustafson who is an avid Australian traveller, freelance writer and digital media consultant for Expedia.