Local providores and produce will be at the heart of food and beverage offerings at the revamped Gold Coast Airport, providing travellers a curated selection of the region’s thriving food scene.
When the doors open on the airport’s Hassell-designed redevelopment in a few months - the centrepiece of a $500 million investment in the precinct - the contemporary new facility will feature cafes and eateries, including flagship cafe and bar, Wollumbin.
In total, there will be 18 new food and beverage and retail outlets between the new and existing terminal areas by the middle of next year.
Chef Matt Jefferson has been appointed the Gold Coast Airport food and beverage ambassador for the Airport Retail Enterprises outlets. 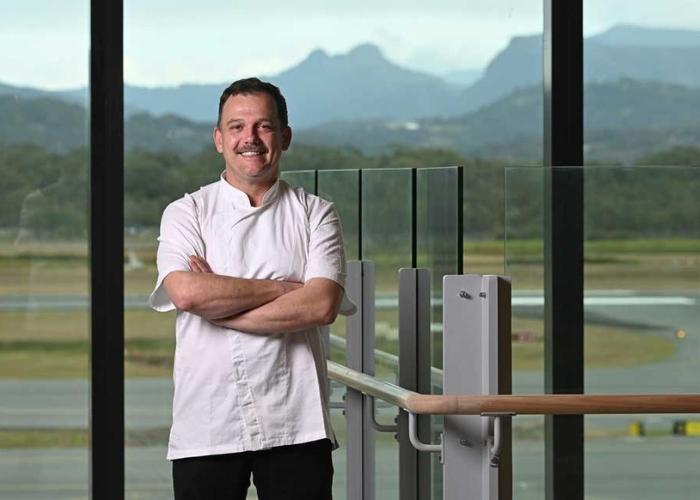 The Executive Chef of Broadbeach’s well-known award-winning Social Eating House, Matt says the airport will be an extension of the Gold Coast’s amazing food culture.
"We want to make a stand for the Gold Coast,” he says. "Local coffee, distillers and brewers and fresh produce will all be on show at the airport.
"Holidays start at the airport. That’s where the excitement kicks off.”
Wollumbin – named after the Yugambeh First Nation name for nearby Mount Warning – will offer a range of contemporary Australian and international dishes and local beverages.
Views to the mountain ranges are also a feature of the upgrade. Visitors will look out to the spectacular vista of the Gold Coast and Northern NSW Hinterland and the airside operations through double-height, floor-to-ceiling windows from the departure lounge.
They will arrive in the space via a naturally lit hall with soaring 11-metre ceilings. A timber feature wall, including the locally abundant spotted gum, mimics the mountain range view. The interior design is also a nod to its setting - to the east are the coastal blues and mint greens of the Pacific Ocean, while to the west are the grey greens and bronzes of the World Heritage hinterlands. 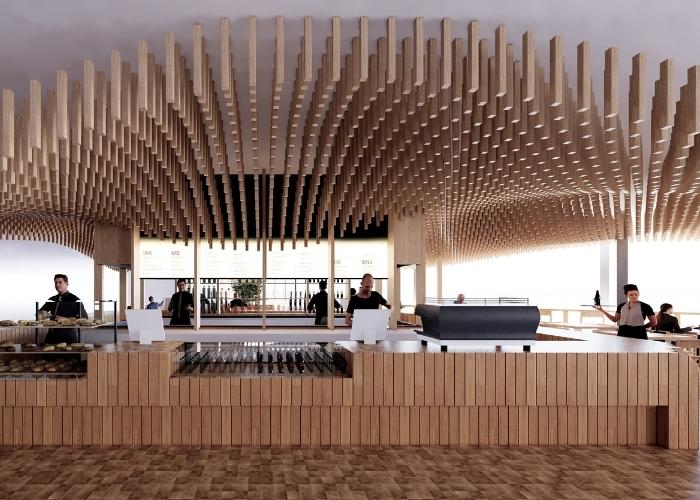 Queensland Airports Limited Chief Executive Officer Amelia Evans says the terminal expansion highlights the best of the Gold Coast and Northern NSW region.
"We’ve stepped things up to a new level at the airport,” she says. "The terminal expansion offers a true gateway experience to the Gold Coast and Northern NSW, with the best local flavours and design features incorporated.
"The views out to the Hinterland are truly spectacular and will no doubt make departing passengers question why they are leaving our beautiful region.”
The Gold Coast Airport terminal expansion doubles the terminal's capacity, with 30,000 sq m of additional space for both domestic and international flights. Travel infrastructure has been upgraded, including the addition of four glass aerobridges and new baggage claim areas.
Matt is excited to see the project reach completion, noting how the region is ‘growing up fast’.
"You’ll find every alley of the Gold Coast has an amazing food and beverage operator now. Everything is here. You can’t go wrong.”
Fast facts:
•The departure lounge glass wall is 180 m and includes 198 panels.
•Custom carpet colours were inspired by hinterland and tree canopy foliage.
•The terminal expansion will include an expanded duty-free store, a parents’ room, multi-faith room and VIP room - GCA’s full domestic network has been restored.
•International connections to Singapore and various New Zealand cities have been re-established, including Auckland, Christchurch, Wellington and Queenstown.
•The terminal will have 18 new food and beverage and retail outlets when the expansion is open this year and the existing terminal refresh is complete next year, including Mediterranean, fresh food, sushi and Asian cuisine, along with the first Schnitz outlet in an Australian airport.
Previous Post
Live, Laugh, Lasagna! Try these Five Restaurants to Celebrate National Lasagna Day.
Next Post
Put Europe on Your Plate with this Beef Stroganoff Recipe from Heart of Europe Chef Aydan McCarthy.