Just after the release of the James Halliday’s ‘Australian Wine Companion 2012’ edition, a laborious annual feat, we had the chance to speak with the man himself. James Halliday was, as you can imagine, intelligent & articulate and we spoke well beyond the bounds of his latest book, considering the review process, corkage and other wine intricacies. 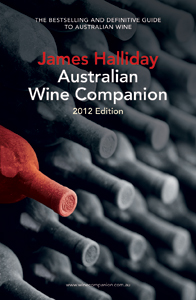 AGFG:Considering that ‘Australian Wine Companion’ is the foremost reference tool for our wines nationwide, how much critical information is carried over from year-to-year?

HALLIDAY:Essentially you can throw last year’s copy away.All the tasting notes are different year after year and they comprise 75-80% of book, so ¾ plus of the book is made up of new information, everything is fact checked, and all of the text is edited. 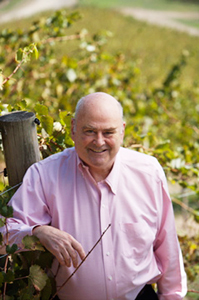 Getting to Know James Halliday

AGFG:Reading your blog posts, there are particularly busy times of year for you.Can you describe your down time when business calms down a bit?

HALLIDAY:My wife would tell you there is no such thing. Fifteen years ago she caught me working on Christmas day, as my office is on the ground floor so I’m always 12 steps from work, because I’d snuck off for a bit when everyone was busy socializing.After that incident she insisted that we enjoy an annual one week holiday completely away from wine.So we travel to offbeat destinations such as Madascar, Turkey, Vietnam or Cambodia, places where wine culture isn’t prominent.

Otherwise, once a year we retreat to our home in Burgundy and I read the books that I don’t get to dig into during the rest of the year.When I’m at home, though, my schedule is basically twelve hour days, 7am-7pm, 7 days a week because I don’t lose any time in the commute. 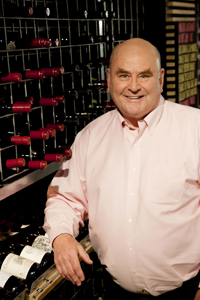 AGFG:You’ve been writing since 1979, can you describe how objectivity and subjectivity factor into your wine reviews?

HALLIDAY:The essential role of objectivity in wine critique is best addressed by looking at the wine shows where a panel of judges undergo wine tasting in silence, then offering individual scores and from there, in the majority of cases, a pattern emerges.Significant disagreement between judges is a rarity, indicating that objectivity is clearly at play with regards to experienced wine critics found at wine shows in major cities.

A little bit more on the value of objectivity, I hold a dim view that any one judge can determine the fate of a wine.Typically the panel scores are similar, and if there’s an anomaly the judge needs to justify the rating.Following that is a retasting and from there a repeatable score is typically established based on convergence.

American and some French approaches to wine writing are really different, offering impossible and preposterous adjectives.Science shows that you can not detect more than 3 or 4 descriptors.

A large majority of our export wines are going to China and interestingly enough, fruit equivalent descriptors are not part of wine marketing there at all; so not only are some details about the wine lost in translation, there are also cultural differences in the use of language for describing wines – no flowery, exotic descriptors come into play here.

The beauty of wine critique and flavourful descriptors, from my point of view, is that a novice wine taster, who typically doesn’t think too much about the levels of taste on the palate, will likely be inspired by some well placed adjectives.You can see the light bulb turn on for the taster when they experience a wine and read ‘fine and elegant, with cassis, blackcurrant and plum fruit and a sprinkling of spice and pepper’; in most cases, they would have never thought of that themselves and the suggestive power of subjective interpretations by an able professional then contributes to the experience overall.Over time you build up a framework of flavour descriptors that illuminate the wine for someone who is unknowing.

AGFG:Regarding this year's ‘Ten Dark Horses’, I enjoyed the ‘beauty being in the eye of the beholder’ story referring to Laurance of Margaret River, where founder Dianne Laurance designed ‘bottles made like no others on the Australian market’.In their case, the novelty complements their award winning wines.On the contrary, how do you feel about ‘alternative marketing’ when the wine doesn’t hold up as medal winning?

HALLIDAY:To address your question about award winning wines, when it comes to medal winners about 10-20% of wines fall into this category.When wineries elect to go into shows, they expect to win some medals; about 50% win & 50% lose. When you enter, you’re likely to be wacked around the ears once or twice, though you’ll never win if you don’t enter and you’re as likely to win as you are to lose.

With regards to packaging alternatives, particularly different bottles, this is still a rarity; to a large extent my response is typically ‘you have got be joking’ and it seems counter intuitive; whether alternative marketing applies to award winning wines or not, nothing speaks louder than success.

AGFG:Aside from the bottle design, regarding the shape of the glassware – very important for wine tasting – if you could only pick one style of glass which one would it be & why?

HALLIDAY:For a long time, Riedel was the only one in the pack; til the late 60’s, they were the only one making fine table wine glasses.Now there are a number.There are different shaped glasses for different wines and essentially the common feature of specialty glasses is the fine, thin nature of the glass… the rim is no thicker than the glass wall itself.You usually find thick glass, all the way to the rim, that protects it from being chipped.Once you’ve become used to tasting wine through fine glassware, it becomes incredibly difficult to go back to the thick wall & rim style of wine glass.They’re like little prisons, confining the aroma of the wine.The wine glass affects wine appreciation:I recommend a big glass with a long stem that you can hold with two or three fingers.

AGFG:You’ve referred to the particular ‘promiscuity’ of Shiraz.Being that it is ‘by far the most important red variety’.Can you define how its leading presence currently benefits the Australian wine industry?

HALLIDAY:There is a marvellous Shiraz bloodline in Australia that has proven time and time again to be amazingly adaptable to varying climate and soil combinations. Even in Tasmania, that is typically too cold for it, one or two lines can be found - it’s amazing.It’s magic in that a well made Shiraz reflects the style of its origin, so it can be radically different depending on the soil and the region, from the Hunter to the Yarra, and that translates in taste.

AGFG:In your opinion, is there a white that matches the prowess of Shiraz?

HALLIDAY:Chardonnay has a firm foothold across Australia.It disappeared from the map for awhile, temporarily replaced by Semillon, though interest in the variety came back in the 60’s and 70’s.Production methods for Chardonnay are really important, presenting a paradox for winemakers with regards to their footprint on the wine.Chardonnay doesn’t object to what the winemaker wants to do with it, though typically the best results are represented in untempered Chardonnay.As such, there has been a big change over the past 15 years as winemakers are sparring to make the best Chardonnays, though with an understanding that the best results are represented in wines that have not been willed into incarnation.

AGFG:You’ve made a point of describing the type of corkage used by suppliers.Can you tell us more about the use of cork in the Australian wine industry?

HALLIDAY:There is an obvious move to screw cap, driven by top end quality wines.Yalumba started it in the 1980’s; they trialled it successfully and screw caps were decidedly technically superior.The problem was that the market did not like them as there was a stigma and overall preference for traditional cork.Their bottles were designed to accommodate the new and effective screwcap, so to get around the prejudice they corked their wines and then put on the screw cap.

Today, I can tell that a wine is destined for export because they have cork because that same stigma still exists in some export markets.The irony is that long life premium wines are best corked with screw caps for optimum protection while they age.Today 97% of white wines have screw caps because they don’t have the same protections in place and reds comparatively have a slightly higher usage of the traditional cork.

The ‘Australian Wine Companion 2012’ edition is bursting at the seams; at 760-odd pages it meets ‘the maximum limit for a soft back reference book that will be repeatedly opened and closed’, so annual production is no small feat. As James mentioned, you can essentially chuck out last year’s book and purchase the new one online.

When you visit their website you’ll notice there’s a lot going on for members, including the exciting release of their new Wine Companion magazine, not to mention the iPhone app, and James Halliday’s own blog. Definitely something to keep an eye on, as it’s clear from our conversation that the depth of Halliday’s knowledge is extensive as he can be both historical and present-day in reference to all matters that deal with wine.