Coastline - The Food of the Mediterranean

"This is a book about the pleasure of sharing and how societies that sometimes are divided are actually united in the details of life that really matter.” ~ David Dale. 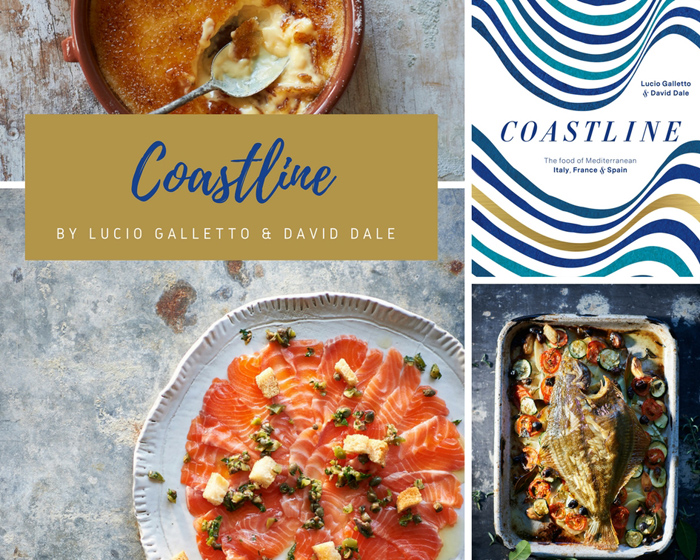 Chef Lucio Galletto grew up between the tables of his parents’ restaurant in a fishing village on the Italian Riviera. While working as a waiter and studying architecture, he met and fell in love with an Australian backpacker and as they say, the rest is history.

In comparison, David Dale trained as a psychologist before deciding he would do less harm to mental health if he went into journalism. He has been described as Australia’s top Chef-wrangler as he’s interested in the story behind everything he eats.

In their fourth collaboration "Coastline,” the pair have put together more than 80 recipes and stories from fishing villages, farms and cobbled squares of the Western Mediterranean, delving into the origin and evolution of each dish as well as a short travel and restaurant guide for each region.

The result is a stunning cookbook that explores the food and culture of the "cuisine of the sun,” and the ingredients that bind together this region, rich in history from the ancient Greeks, Romans, Arabs and Vikings.

Olive oil, along with a love of garlic, anchovies, fresh herbs, peppers and seasonal vegetables, dominate the recipes, such as salmon carpaccio with anchovies, paired with a classic Ligurian bread salad, p 114.

Originally, carpaccio only referred to raw beef and was coined to describe the deep red colouring in the paintings of Vittore Carpaccio, who died in 1526 without ever tasting the dish that took his name. The term now loosely refers to any thinly sliced raw ingredient and the delicate layers of salmon in this recipe are balanced by the crunchy cubes of oven toasted bread.

A simple, but impressive dish of whole baked fish with tomatoes, potatoes and olives took the authors’ fancy when they were dining at Les Templiers restaurant in Collioure. The waiter explained that Poisson au four facon Pauline was named after the original Chef, who reputedly served it to Picasso and various other artists during the 1920s, and the name literally translates as "fish in the oven Pauline-style.”

While the vegetable element remains constant, the fish that bakes on top varies with the catch of the day. The only requirement is that it is flat so it cooks evenly and the juices run into the potatoes - and make sure not to turn the fish over once cooked. Locals believe if someone turns a whole baked fish over while serving it, somewhere in the Mediterranean, a fishing boat overturns and no one wants that on their conscience, p 231.

From the little lanes and courtyards of Girona, where Arya Stark from Game of Thrones ran rampant in the last season, comes the Catalan crush on sweet desserts. The Moors introduced almonds, hazelnuts, oranges and cane sugar to the area and that has manifested into Girona’s love of pastries and treats. While the French are usually credited with inventing the brulee process,Crema Catalana is the Spanish version and where it differs is the addition of orange zest, p 266.

The best way to serve it is immediately after the sugar has caramelised to maximise the contrast between, hot, crunchy toffee and cool, smooth custard. Originally the sugar on top was burned into toffee using a hot iron, but don’t contemplate attempting this at home if the iron is to be used to press clothes again.

For those who want to make the perfect pesto, best bouillabaisse or purest paella, then Coastline is the recipe book needed to grace the kitchen shelf.