From the Bay of Fires in Tasmania to Lord Howe Island, Hamish Blake and wife Zoe Foster-Blake share their top Australian travel bucket list destinations – start planning your next holiday from their must-visit places now!
As two of Aussie’s most iconic homegrown personalities, the couple is helping to inspire all of us to book our next domestic holiday as part of Tourism Australia’s latest Holiday Here This Year campaign. 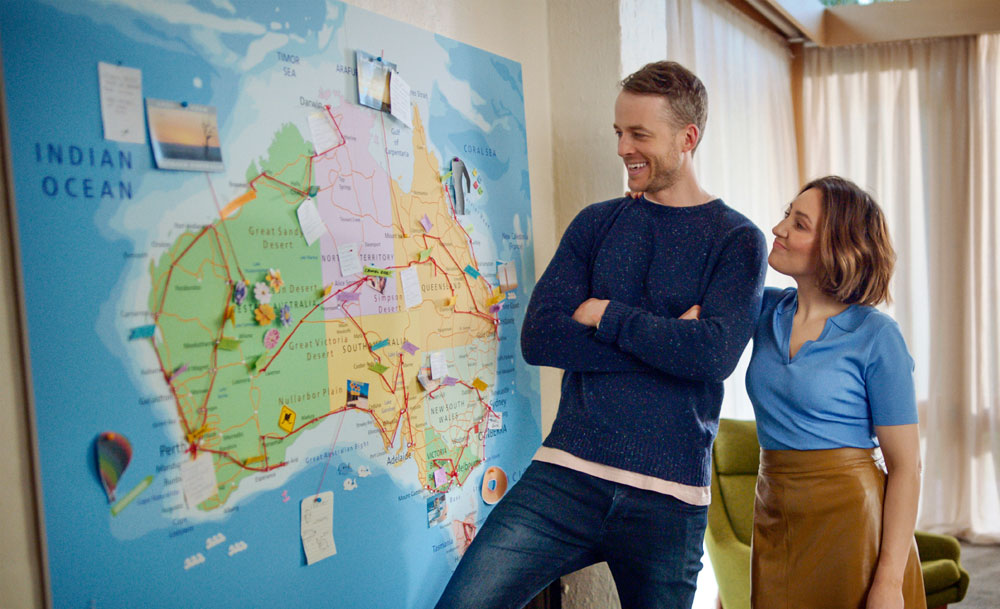 Where in Australia would you go?
Tourism Australia Managing Director Phillipa Harrison says with domestic restrictions lifting and consumer confidence improving, now is the perfect time to decide where in Australia to go.
"We’re excited to be welcoming Hamish and Zoe to our Friends of Australia program to help us tell our story by sharing their love of travel and providing plenty of holiday inspiration to Australians of all ages,” she says.
Let’s get started as we zoom around the country with Hamish and Zoe:
Bay of Fires, Tasmania:
"Have had mates who’ve raved about the natural beauty of the Bay of Fires. I also love that it’s a little tricky to get to, so it’s quieter. I think those spots are always worth it,” says Hamish.
Extending along the coast from Binalong Bay to Eddystone Point, find crystal-clear waters, white sandy beaches and striking orange lichen-covered boulders at the Bay of Fires. Explore this remote and breathtaking landscape on your own, or take a four-day guided Bay of Fires Lodge Walk. 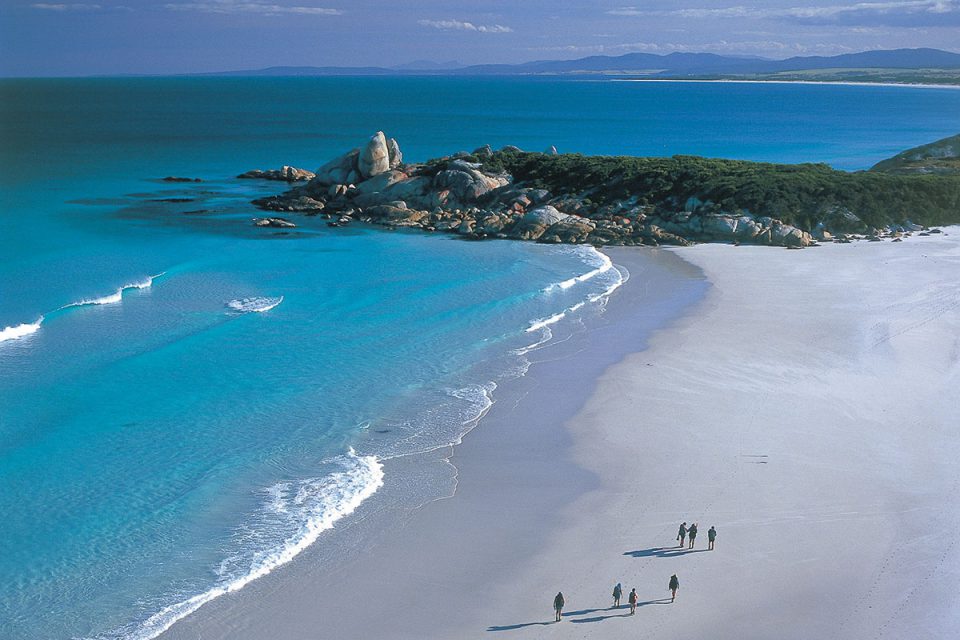 Bay of Fires Lodge Walk.
Those pressed for time can hop aboard an afternoon cruise to see the southern reaches of the bay, which at certain times of year are home to whales, fur seals, sea lions and dolphins.
The Kimberley, WA:
"Have never been to The Kimberley and simply can’t wait. My wife is big on finding an oasis to swim in. I know her dream waterhole is out there,” Hamish explains.
Two billion years of natural history are on show along the isolated Kimberley coast in Western Australia. The geology alone is mind-bending, with ochre rock formations created during intense movements of the earth, twisted by time and eroded over millennia. 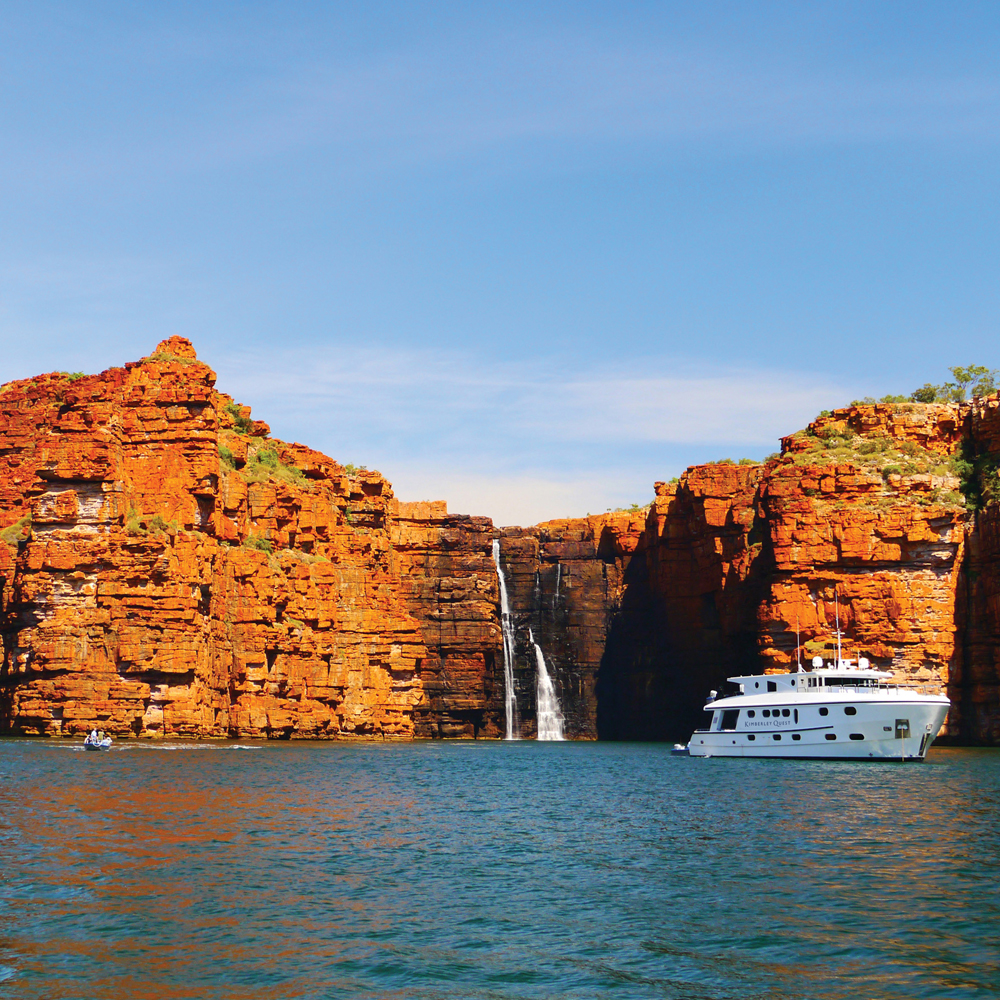 Cruising the Kimberley.
Waterfalls blow fine mist over cliff tops, giant boab trees stand like proud sentinels and Aboriginal rock art hides in the crevices. Among all this age, there's the most sought-after commodity: peace, best achieved while reclining on the deck of a cruise boat. Multi-day tours, all covering roughly the same itinerary, depart from Broome, Wyndham (via Kununurra) and sometimes Darwin.
Bruny Island, Tasmania:
"Love a bit of rugged coast and Bruny does rugged well from what I hear and my intensive Googling.” – Hamish.
While it’s easily accessible from Hobart by ferry crossing, Bruny Island provides a true wilderness experience. Popular as a weekend destination for beach-goers and foodies, it is also home to a rugged, relatively untouched landscape that is both dramatic and beautiful. 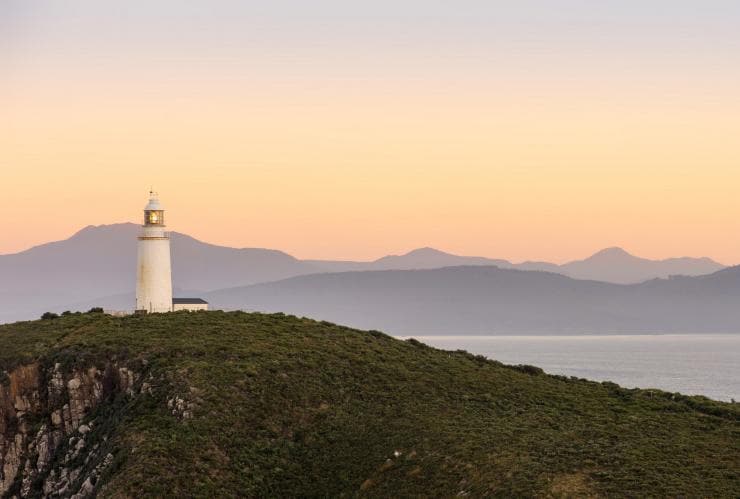 Bruny Island Lighthouse.
Explore it all with great walking tracks and pristine swimming, surfing and fishing beaches. Also be sure to take advantage of the island's flourishing fine food and wine industry. Visit Bruny Island Cheese Co. to sample traditional European cows’ and goats’ milk cheeses - call into Australia’s southernmost vineyard, Bruny Island Premium Wines, for a glass of Pinot Noir with lunch; or make yourself a picnic at Bruny Island Berry Farm.
Kangaroo Island, South Australia:
"Have always wanted to visit and after the bushfires, I’m even more motivated to go and show some love to a very special part of Australia as they recover.” – Hamish.
Almost half of Kangaroo Island, off the coast of South Australia, was affected by bushfires; but there is still plenty of beauty to behold, with the majority of populated areas being untouched. You can swim with wild dolphins at Kangaroo Island Marine Adventures, sample organic Ligurian honey at Island Beehive, or taste wine at cellar doors across the island. 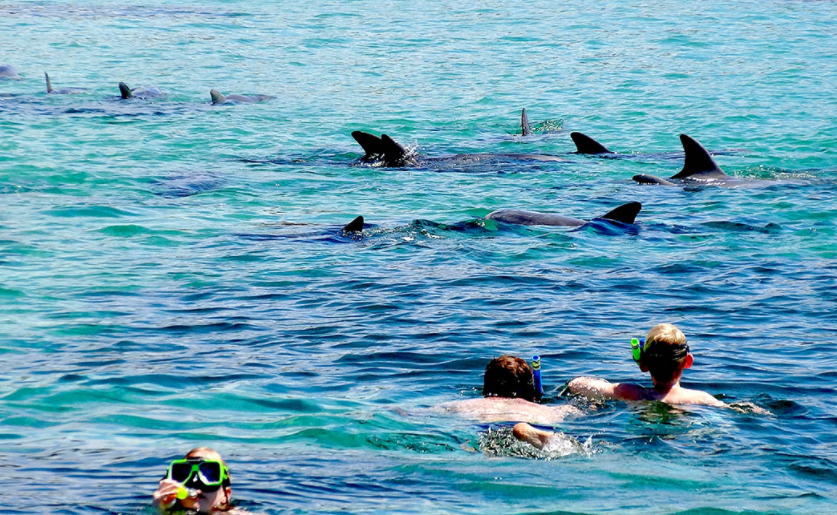 Swim with the wild dolphins on Kangaroo Island.
Since the fires, ecotourism venture Exceptional Kangaroo Island has partnered with local charity Kangaroo Island Land for Wildlife to take guests to the largest tract of untouched bushland on the western end of the island.
Lord Howe Island, NSW:
"I guess I’m collecting islands now? Lord Howe must be visited – again I’m going heavily off mates and Google, but I love trying to find pristine environments and from what I gather, it does not get much more pristine.” – Hamish.
An hour’s flight from Sydney or Brisbane, Lord Howe Island is a World Heritage-listed island paradise where shoes are optional and the lifestyle is laidback. With only 400 visitors allowed on the island at any time and just 300 permanent residents, it is one of Australia’s best-kept secrets.
Here you can swim with turtles at Old Settlement Beach, feed the fish and snorkel with baby reef sharks at Ned’s Beach, or take an eight-hour guided trek up Mount Gower, which is considered to be one of the Great Walks of Australia.
Karijini National Park, WA:
Often described by travellers as a journey to ‘the centre of the earth’, Karijini National Park in Western Australia has some of the world’s most impressive freshwater pools. Hike through the Hancock Gorge trail to Kermits Pool, where a private watering hole nestled between narrow passages and rugged rock faces awaits.
Zoe suggests basing yourself at the nearby Karijini eco-retreat and spend your days exploring various trails that will lead you to more hidden gems.
Great Barrier Reef, Qld:
The 2300 km Great Barrier Reef is the largest coral reef system in the world; giving visitors the opportunity to swim, snorkel, dive or sail the living masterpiece. Whether you explore the stunning Whitsunday Islands, trek the ancient Daintree Rainforest or relax on luxurious tropical islands resorts such as Orpheus Island Lodge or Elysian Retreat, a day on the reef is all about the unforgettable nature that surrounds you. 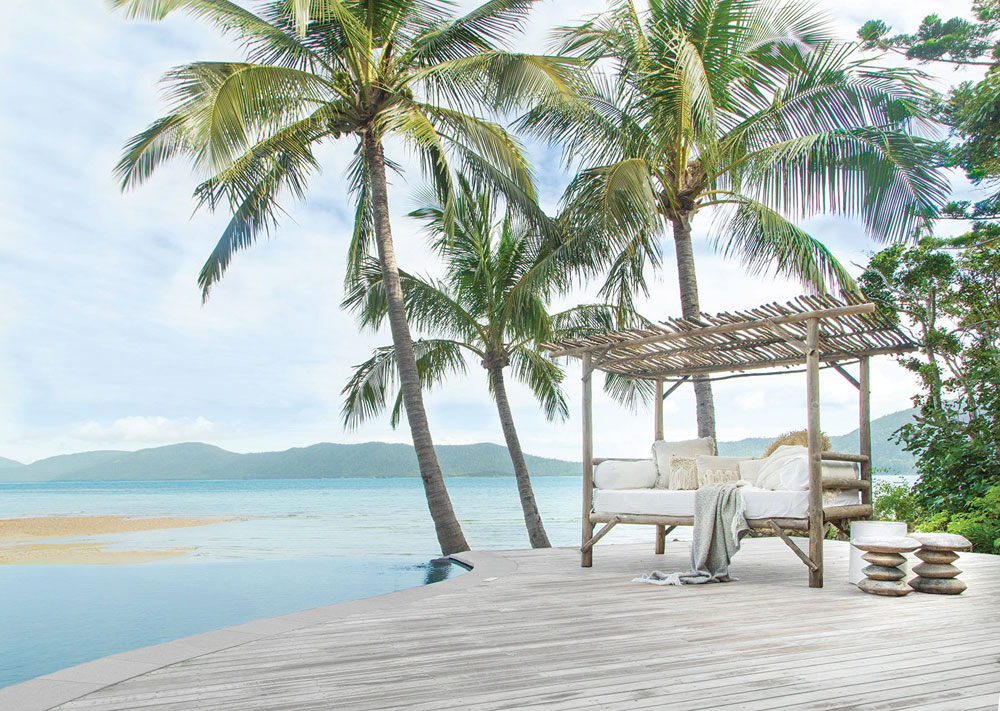 Elysian Retreat.
Dreamtime Dive & Snorkel experience offers guests a rare opportunity to explore accompanied by Aboriginal guides from the region, whose traditional ownership of sea country stretches from the Frankland Islands south of Cairns to Port Douglas.
Ningaloo Reef, WA:
In the northwest coastal region of Western Australia, find Ningaloo Reef -  the best destination to get up close and snap a picture of the world’s biggest fish, the whale shark. The reef is also home to a plethora of other sea creatures including turtles, tropical fish, dolphins and a colourful coral garden. 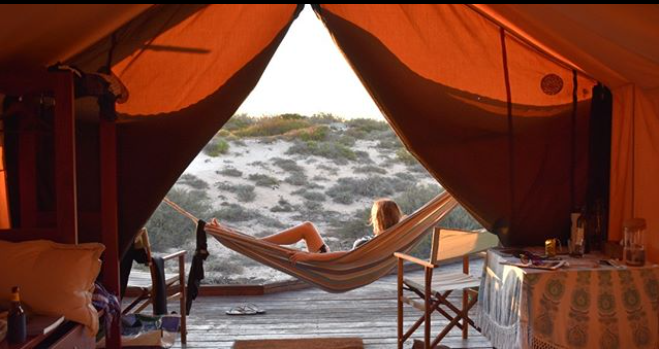 Sal Salis luxe glamping hideaway.
After a day out on the water, look to the luxe glamping hideaway of Sal Salis. With the reef only a few steps off the beach, each of its 16 safari tents is fitted with hard floors, a real bed, eco ensuite and sun-heated shower. Perhaps the best part of the experience is the Chef-created canapés at sunset, followed by dinner beneath the stars, which is included in the cost.
Uluru, Northern Territory:
You can feel a powerful presence the moment you first set your eyes on Uluru. The stunning colours of this 348-metre high monolith transform with the time of day – and there are more than 100 activities and experiences on offer.
One not to miss is the Sounds of Silence four-hour dining experience, served on a viewing platform overlooking the Uluru-Kata Tjuta National Park. After one of Australia’s most spectacular sunsets, guests dine as a storyteller shares the tales told in the stars above. 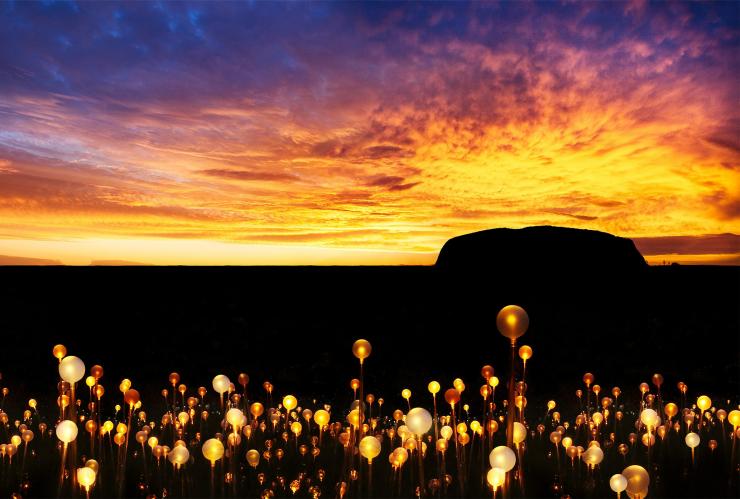 Field of Light.
Then visit Bruce Munro’s Field of Light, crafted from more than 50,000 solar-powered stems crowned with glass spheres, lighting up the night's sky. The spheres illuminate the red desert’s night sky with changing colours from brilliant violet to ochre, blue and white.
Previous Post
If Travel Was Free You Would Never See Me Again - Where to Go on Your Next Vacay.
Next Post
Give 'Em Pumpkin to Talk About - Perfect Halloween Pumpkins.