An O’Connor Pub Crawl through Ireland

Leprechauns come out on St Paddy’s Day and point to the pot of gold at the end of the rainbow, while Irish the world over celebrate the feast day of the patron saint of the country. 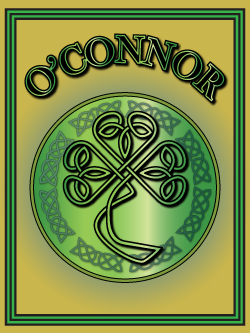 St Patrick died on March 17, 461 and oddly he wasn’t even Irish - he was born in Roman Britain, kidnapped into slavery and brought to Ireland. After escaping to a monastery in Gaul (France) and converting to Christianity, he returned to the Emerald Isle as a missionary, confronted the Druids and abolished their pagan rites.

Patrick became a bishop and after his death, was named Ireland’s patron saint. Original celebrations of his demise were understated, it wasn’t until the Irish emigrated to the US that bigger celebrations and the parades of today took hold.

The ninth most common surname in Ireland, the O’Connor’s claim descent from a 10th Century King of Connacht, meaning the royal blood line and family history go back thousands of years.

With a surname of O’Connor, there is no doubt Irish blood running through these veins. So, what better way to celebrate St Paddy’s Day than to take a journey through some of the namesake pubs that abound in the beautiful green countryside of Eire. 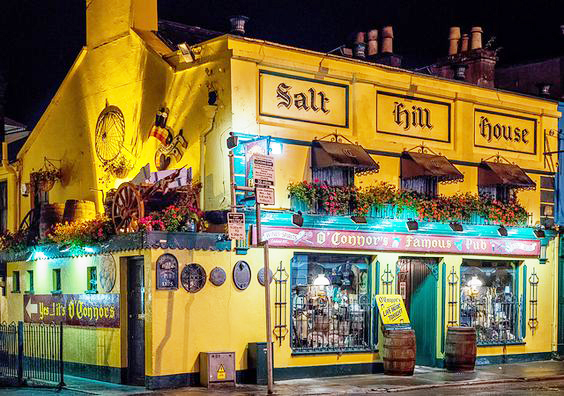 "If you ever go across the sea to Ireland

Then maybe at the closing of your day

You will sit and watch moon rise over Claddagh

And see the sun go down on Galway Bay.”

This large bay on the West Coast of Ireland is home to O’Connor’s Famous Pub in Salt Hill. It was opened as a bar in 1942 by Thomas O’Connor, who had moved from Maylough to Galway with his wife Abbigale and their 13 children.

With third generations of the family now the owners, O’Connor’s is famous for its hospitality and live music and is considered Ireland’s original singing pub. A must for all visitors to Galway, big name guests have included Ed Sheeran, Nancy Cartwright (Bart Simpson), Acker Bilk and Art Garfunkel. 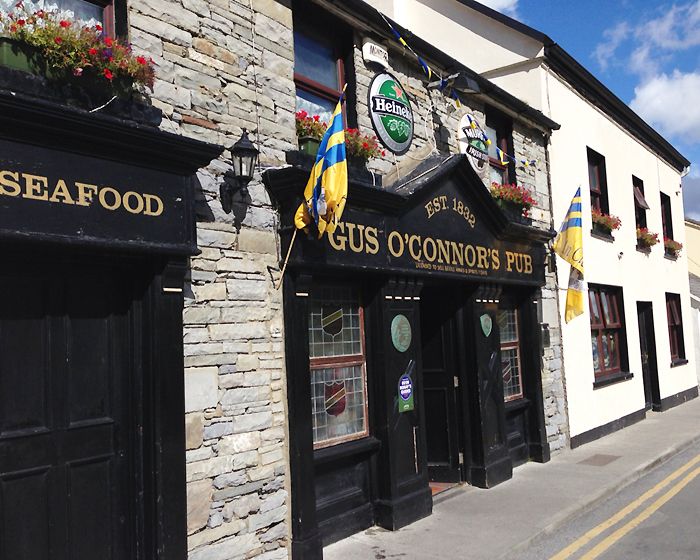 Doolin is one of the most famous towns in the world for listening to good, traditional Irish music and there is no better selection than at Gus O’Connor’s Pub, first established in 1832.  There’s something magically inspiring about this place, as if a leprechaun would jump out from behind the bar.

Located in the heart of this picturesque village, set amongst the rolling hills of West Clare, Gus O’Connor’s serves food all day, every day. The menu has a backbone of Irish fare, such as beef and Guinness stew, fresh cod and chips, seafood chowder, or steaming fresh mussels in white wine, cream and garlic sauce.

The pub is part of the annual Miko Russell Traditional Music Festival in the last weekend of February, and holds its own music event – Sean Nos Dancing and Music Festival on October Bank Holiday. 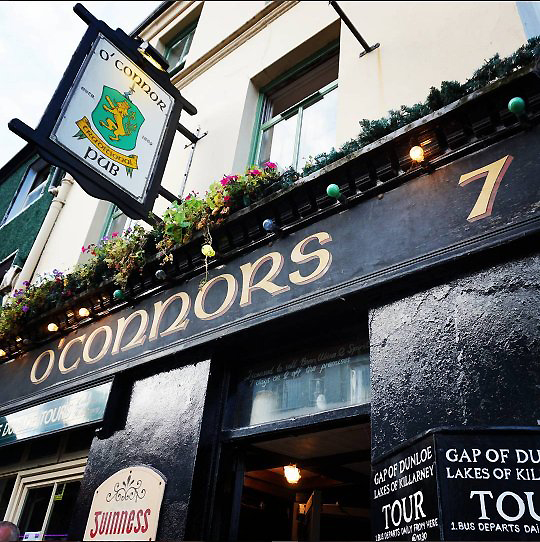 Killarney sits on the shores of Lough Leane in Ireland’s Southwest County Kerry. A vibrant town, surrounded by beautiful countryside, it is also home to O’Connors Traditional Pub. Located on High Street, the bar was opened in 1929 by Matt Cahill, who changed its name after his daughter Kitty married Teddy O’Connor, a famous Kerry footballer.

Visitors love the lively, traditional music and the fact they can always meet someone interesting – it’s just that kind of place, where characters meet to share their stories and a pint of the best Guinness. 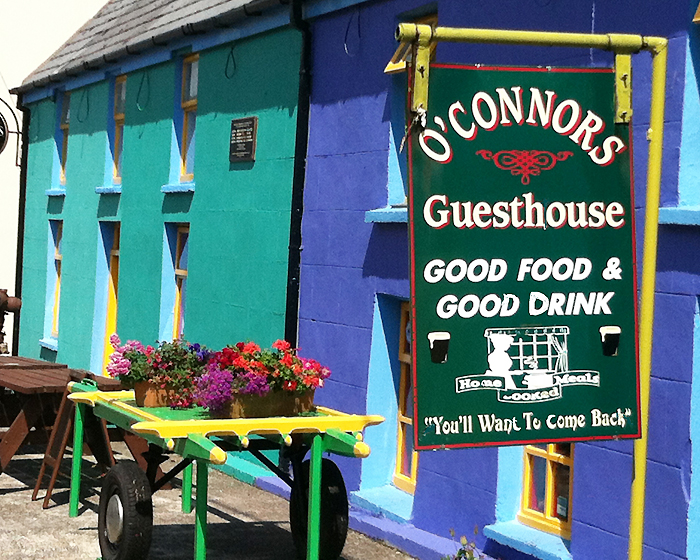 Beautiful Cloghane on the scenic Dingle Peninsula is home to O’Connor’s family-owned guesthouse and bar, offering affordable accommodation and quality Irish dining. In 2014, O’Connor’s received an Irish Hotel Federation Award for 150 years in the hospitality industry.

This authentic Irish pub serves good drink, food and craic (banter, good times). Renowned for its friendly atmosphere and live music, as well as a charming dining room overlooking the Brandon Estuary, O’Connor’s is the place to stay and play in Cloghane. 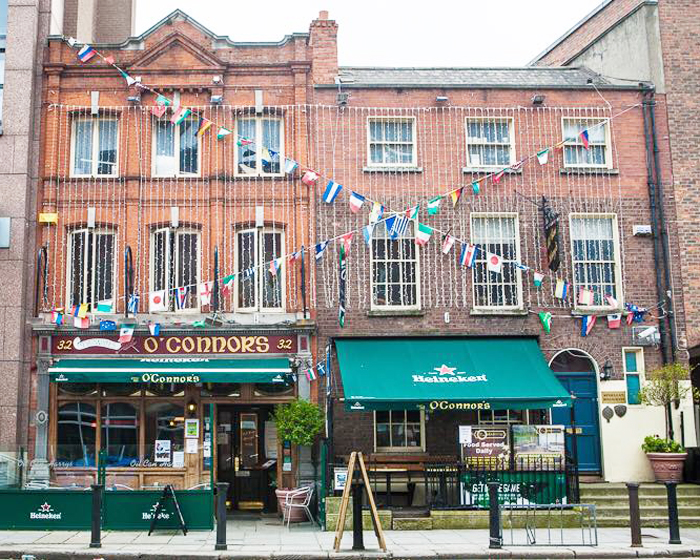 Steeped in history Oil Can Harry’s, in the heart of Dublin’s fair city, has been as much an attraction as a busy pub for more than 100 years. Originally purchased by Ned Hynes in 1913, it remained in the family for generations, until the early 1970s. The list of regular customers over the past century has included generals, statesmen, writers, poets and the odd rock star, all mixing freely with local faces.

Now owned and managed by Tim and Wendy O’Connor, the tradition of last century continues with a warm welcome to all who pass through the doors on Lower Mount Street - sit down, take a load off and enjoy a tipple with friends. 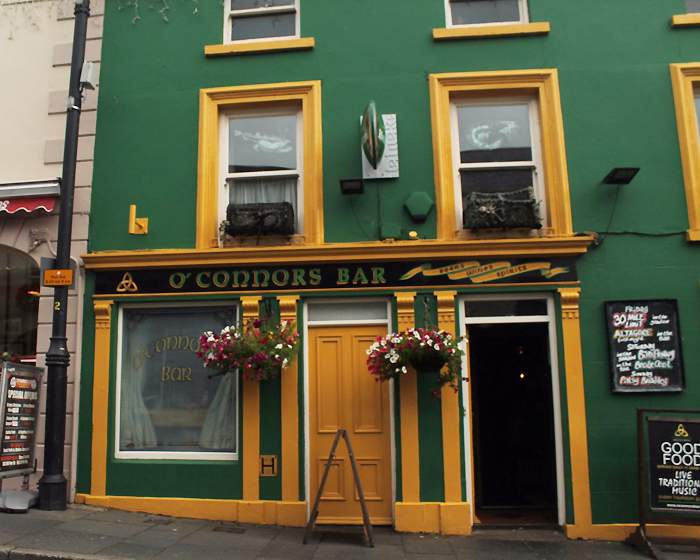 A small town in Northern Ireland, Ballycastle is a peaceful harbour and holiday resort on the Eastern end of the Causeway Coast. Widely regarded as serving the best pint of Guinness in North Antrim, O’Connor’s Bar sits on busy Ann Street in the middle of town and is an ideal place to stop, relax and soak up some enthusiastic Irish hospitality.

The main bar retains the character of a ‘local’, where townspeople and visitors alike can enjoy a pint in one of the booths and some hearty regional fare. Thursday is the night for live music, when county musicians jig, reel and hornpipe their way through the evening. 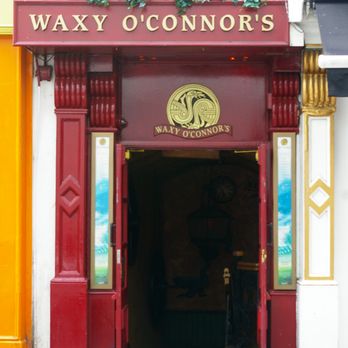 Now a worldwide identity, including a venue Down Under at Surfers Paradise on the Gold Coast, Waxy’s roots began in Ireland. Born in Smithfield, Dublin City in 1788, Waxy gained his name by way of his profession as a candle maker and is primarily known for his great appetite and capacity for hard liquor.

It seems he was not alone amongst men of his craft – their fondness for and ability to consume copious quantities of beer and whiskey are legendary. The excuse for such excesses is that candle makers had to work in such extreme heat, it sapped a man of both energy and fluids.

As Waxy was heard to comment: "Such heat does parch a man – a parched man is a barren man – and beer is the only cure…ah, us lads could put away gallons in a day!” Water it seems was an unknown elixir.

We have only scratched the surface of the O’Connor legacy in Ireland and across the seas…want to know more about the Emerald Isle? Click here.

Previous Post
Stew on This! Autumn Stews to Warm You Up
Next Post
Coming Up Roses with Cinnamon Kisses & 58 other Seductive Chocolate Recipes