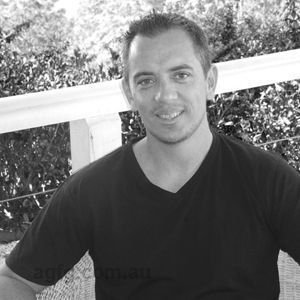 I came from a very financially poor background where something as simple as ice cream or roast chicken was a very rare treat. And hence a desire and passion for food developed – I was excited to explore the unknown.
At the age of fourteen I started working casually in a Chinese restaurant. I worked for very little money, however my reward was that at the end of service every night I could cook whatever I liked for myself. Initially it was about expanding and developing my taste buds and eating things I had very seldom had the chance to try, however it soon became the opportunity to take it further and to start experimenting with flavors and textures.
By the time I had reached seventeen I was working full time in the restaurant and completing my HSC via correspondence. By eighteen I had the burning desire to become a qualified chef which in those days was not possible in a Chinese restaurant. I decided to start a western apprenticeship and did so at the Casino RSM Club.
In those days clubs with good a l¬a ¬carte restaurants were an ideal place to get an ‘all round experience’ by regularly doing weddings for 200pax and also learning the intricacies of finer a la ¬carte.
After finishing my first year at TAFE I was awarded as Apprentice of the year! It was at this stage I knew it was time for bigger things so I packed up and moved to Brisbane. I did short stints at several well known Brisbane restaurants, however I found myself more attracted to smaller places such as "Big Louis Pasta” in Kangaroo Point ¬where the chef at the time traveled to Italy for 2 months a year to work in a family restaurant, and then return to resume the reigns in Brisbane.
All along, I attribute my success to the incredible and authentic chefs I have been mentored by rather than the actual establishments as so often credited. During my second and third years at TAFE I also finished as a top student, however the appeal of Brisbane city living had run its course. I completed my training and I had itchy feet. I realized I
desperately missed my home, the beach, the rain forest and, in my opinion the best place to
live in the world ¬Northern NSW.
Although I wanted to move home I wasn't prepared to sacrifice all I had worked for and would only come home if the right position arose. I applied for a position at the Beach Hotel in Byron Bay. At the time it was a Mecca for learning!! They employed a brigade of over 100 kitchen staff turning out staggering amounts of food and offering an exclusive restaurant, motel room service and pub food. There were chefs from all over the globe: Indonesia, Thailand, Japan, France, and Spain; Ex executives from Hilton etc, all coming to work here for the lifestyle. I was like a sponge. I would not let a flavor, spice ingredient or recipe go unnoticed. Within a year I had climbed to the sous chef position and in two years became the Head Chef of the Seaside Restaurant (an innovative modern Australian restaurant). So in just over 4 years I became the Executive Chef of the Beach Hotel Complex and also managing the Brunswick Heads Hotel (owned by the same owners).
The hotels were a massive challenge with million dollar turnover and multiple kitchen sites. I was also fortunate enough to do a little Chef Consultancy work at Treasure Island in Fiji.
In all I spent a total of 7 years at the Byron bay beach hotel which was a culinary Mecca and a massive challenge which gave me a life time of experience but left me depleted of energy and inspiration. As a result I needed a few years break to rejuvenate.
In 2009 I embarked on a much smaller challenge but one no less rewarding and at times frustrating ¬to turn a small relatively unknown restaurant into an iconic dining establishment. I started working hard at Fleurs Restaurant and Cocktail Bar in Ballina. I believe I have brought a level of dining to a small town that has never been here in the past. In doing so, we are slowly ‘educating’ our dinners as they become more interested in the unknown – they are growing with us at the restaurant. I have spent several years now also putting my extensive wine knowledge to the test creating several boutique wine lists. Fleurs is a wonderful place to dine now and is finally receiving all the recognition it deserves.
This year marks my 26th year cooking and I feel as passionate as the first time foraged for mushrooms at the age of 8 and look forward to the ever changing world of dining and what lies ahead.
Back to Top