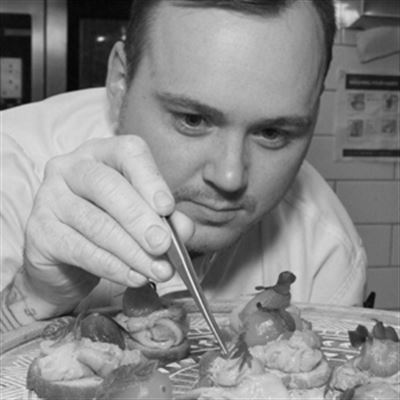 I was born in Liverpool, England, but was raised in Australia since the age of 5. At 18 after I left school, I worked in a textile warehouse, before I was offered a job as an apprentice Chef. Although I didn’t have even the slightest idea about cooking, I took the challenge.

I began as an apprentice for Kangan Institute, working and going to TAFE there. I then moved onto The Boathouse for another couple of years. Thereafter, I broadened my experience by working at top restaurants as well as any and every food business I could to gain experience. By the age of 25, I gained the status of Head Chef. I haven’t looked back since!

Nope! Not at all! I was bad at it in school. When we would have Hospitality Class, I was always the one who burnt something, and they would have to evacuate the class. I think the teachers thought that it was all a ploy!

Well, I like this comment about my style: "it’s like you put Asian, Middle Eastern flavours, Modern Australian and European, and smashed them all together, and it works!” So, I’ll go with that. My style is "unexpected fusion.”

What is you feature flavour these days?

This week I’m really into spices. I’m travelling through Morocco with their smoky and sweet flavours, and a bit of tang and I’m loving it.

Well, I’m sure my girlfriend and friends could tell you some stories! But, in the kitchen probably tea towels. I personally re-fold every tea towel (150) a certain way and store them in a certain place. It’s a problem if they’re not done that way and my Chefs have a laugh about it.

Josh Smallwood, Head Chef at Ricky’s in Noosa. I was formally his apprentice. He not only taught me how to cook and create, but he also instilled in me a work ethic that I live by every day and, carry into every kitchen I run. He told me at an early age to gain as much experience as possible. This was the best piece of advice anyone has given me and he greatly influenced my career.

Also, Marco, because Marco Pierre White was the youngest Chef to secure 3 Michelin stars and he is a master of modern cooking.

The ability to come to work every day and know I’m going to learn something new, I’m going to experience the unexpected, I’m going to make someone’s day with my food and I’m going to have to push myself further than the day before. It’s exciting.

The hotcakes are ridiculous, but taste so good!