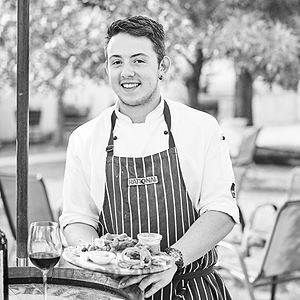 Born:
Belfast, Northern Ireland.
History:
I was born in Belfast, Northern Ireland and started my apprenticeship in Belfast at the age of 15. My mum was a chef, so when they were busy I would always have been in the hotel with her where she worked. Listening to orders being called out by the head chef and in return the kitchen team replying oui chef and listening to the pots and pans being tossed and seeing the flames when the chefs deglazed, all made the hairs on my neck stand up.
From around the age of 8 or 9 all I ever wanted to be was a chef, so at 15 I started my apprenticeship and studied under numerous chefs including my mum. Then for my final 18 months my head chef sent me to Nice in southern France to complete my trade. When I arrived there I was merely a young boy 18 months into my apprenticeship. The head chef I was to meet was called Mathieu Rayleigh. He was a very intimidating man to look at who was around 6ft 2inches tall and built like a brick wall. His English was very broken and my French at that stage was non-existent, so communicating was very difficult, but one language we both spoke was food. He opened his home up to me and I lived with him and his beautiful wife for my entire stay. On our days off we would be at the market getting fresh fish or at one of the farms picking up potatoes. At these markets, he introduced to me the croque monsieur and from there on it was a tradition every week when we had our day off to go to the market to get a croque monsieur.
Southern France was sublime, I loved walking the streets smelling all the fresh bread being made or the pasta sauces reducing or the freshly made pastries being baked. I moved to Australia in 2009 and joined a fantastic kitchen team in Mornington Peninsula; from there I opened the biggest Degani in Victoria as the head chef, I then took over as the head chef when Hotel Australia changed ownership. Now my chef journey has brought me to Monichino Wines where we launched Cafe Tramontino in September 2015 and the response from our customers has been sensational.
Have you always wanted to be a chef?
Yes, growing up with my mum who was a chef, I was always in the kitchen with her and naturally fell in love with food and the industry.
How would you define your style?
Refined European food showcasing the freshest local produce our region has to offer with a strong French influence.
What is your feature flavour these days?
I love to obviously use our great array of wines whether it’s poaching melon radishes in orange muscat or braising baby turnips in ouzo or using one of our sensational fortified wines and making a jelly.
Obsessive compulsive about?
Quality of produce that I receive and quality of the food that leaves my kitchen because I strongly believe that close enough isn’t good enough.
Your greatest culinary inspirations/influences:
Obviously my mum was without a doubt my biggest influence. She taught me all of my basic methods of cookery and also taught me standards of food. Another major influence in my culinary career was Mathieu Rayleigh, my head chef in France who introduced me to the French style of food and is the reason behind why I cook food the way I do today.
What do you love about this business?
This business is all family run and has been running for 54 years. One of my greatest delights about working for Monichino Wines is that we are situated in the perfect area between orchardists and farmers. Also being part of the Farm Gate Trail is an added extra having local produce in our surrounding area makes my job exciting as I have the freshest produce at my disposal. One thing we pride ourselves on here at Monichino Wines is our degustation dinners perfectly matched with our extensive range of fabulous wines.
An ingredient you cannot live without?
Would definitely have to say butter as almost everything I make whether it’s sauces, soups, purees or anything at all gets a knob of butter at the least.
Most eyebrow raising menu item?
Probably has to be my Romesco braised crocodile.
Signature dish?
It would be a tie between my 8 hour braised crispy skin pork belly, pan seared scallops, cauliflower puree and prosciutto crumb finished with an orange muscat glaze and pan seared blue eye served over a beurre blanc sauce, pickled radish, smoked baby leeks and chardonnay braised baby fennel topped with salmon roe.
Back to Top