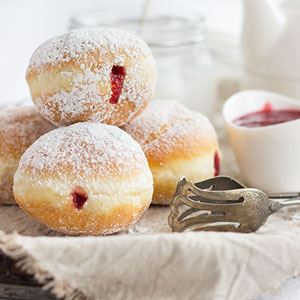 Place 1/2 cup lukewarm water in the bowl of an electric mixer and sprinkle yeast over water. Stir and set aside to activate for 5 minutes.

Add the remaining ingredients to the yeast mixture and combine in the electric mixer fitted with the dough hook attachment on very low speed for 1 minute. Stop the mixer, scrape down the sides of the bowl with a rubber spatula and beat on high speed for 2 minutes.

Transfer the dough to a bowl lightly coated with non-stick spray. Choose a bowl large enough to let the dough double in size. Cover bowl loosely with a plastic bag, or plastic film and let rest for 2 hours until dough doubles in volume.

While dough is rising, combine sugar and cinnamon in a small mixing bowl and set aside.

Fit a pastry bag with a narrow plain decorative tip and fill with jam.

When the dough is ready, turn it onto a floured surface and roll down with a rolling pin until it’s 1.5cm to 2cm thick. Cut out 12 rounds with a 8cm round biscuit cutter or use a knife.

Line a baking sheet with a linen napkin and dust it generously with flour. Place the doughnuts on the prepared baking sheet.

Fill a large, heavy-bottomed pot with frying oil (such as canola or sunflower) about 7-8cm deep and heat to 180 C on a deep fry thermometer.

Working in batches, carefully drop the doughnuts one by one into the hot oil. Fry until golden brown, then flip them over and fry the other side - about 4 minutes total.

Let them sit until they’re cool enough to handle.

While the doughnuts are warmish, gently toss them in the prepared cinnamon sugar.

Then, use the handle of a wooden spoon to poke a hole three quarters of the way into the doughnut. Gently move it around to create a nice-size cavity for the jam. Insert the tip of piping bag filled with jam into the doughnut and fill until it feels heavy.

Repeat with the rest of the doughnuts, then maybe hide them in case the family finds out you just made fresh, delicious jam filled doughnuts. 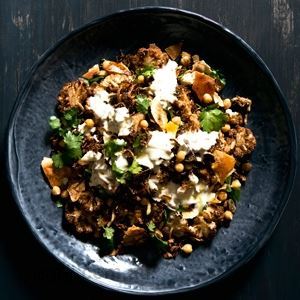 Cauliflower and Chickpea Salad with Almonds, Fried Onion and Sultanas - by Linda and Paul Jones

Ideal Winter salad to tempt family tastebuds or as a side to a perfectly grilled steak. 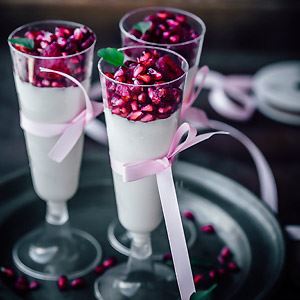 "This is a great recipe when you want a simple dessert that is light and delicious without spendi... 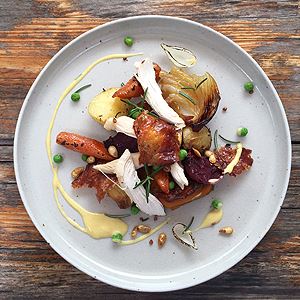