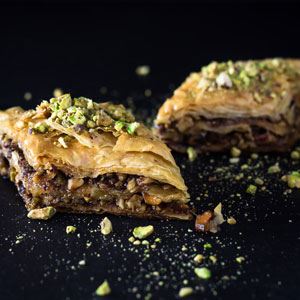 Thaw the filo pastry dough according to the manufacturer’s directions. Roll out the dough and cut so the sheets fit in the pan. Cover with a damp towel to keep it from drying out.

Process the nuts into small, even-sized pieces. Combine with sugar, cinnamon and cloves.

Place a sheet of filo pastry dough into the pan. Use a pastry brush to coat the filo sheet with melted butter. Press it lightly to fit the pan.

The top layer should be 8 filo sheets thick, each sheet individually buttered, including the top. It's normal for the sheets to wrinkle, which adds more texture.

Use a sharp knife, make one slice all the way through, from corner to corner. Continue cutting, criss-crossing until you have a bunch of diagonal pieces.

Bake at 180 C for 30-35 minutes or until lightly golden brown and edges appear slightly crisp.

While your creation is baking in the oven, make the syrup.

Combine the cinnamon stick, sugar, lemon juice, honey and water in a medium saucepan. Bring to a boil, then reduce to medium low heat and let simmer for 7 minutes and slightly thickened.

Remove the cinnamon stick and allow to the syrup to cool.

Spoon the cooled syrup over the freshly baked, hot baklava.

Let it cool for at least 4 hours before serving, which allows all of the delicious flavours to meld together.

Garnish with finely ground nuts, the green of pistachios is a nice look. 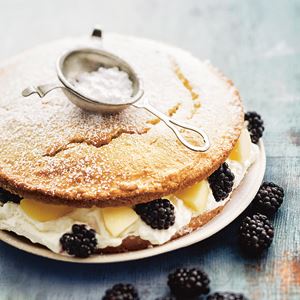 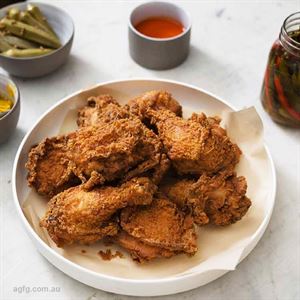