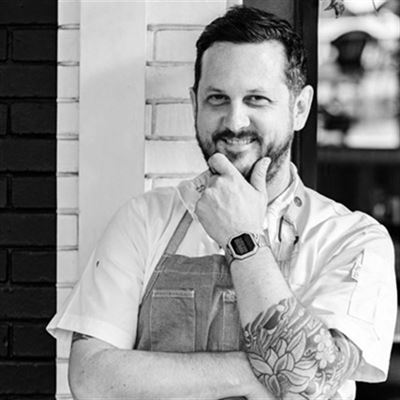 Born:
Hobart, Tasmania.
History:
I started in restaurants back in 1997, fresh out of college. Initially, at a family-run Malay Indian Restaurants, that’s what got me interested in the different flavours and cuisines of the world. I was young, but fortunately, a job came up at one of Hobart's best and busiest venues called Rockefeller’s, this is where my apprenticeship started.
In 2001, I moved to Sydney. I spent the next seven years working at the Bondi Trattoria, starting as a Commis Chef, working my way up to Head Chef. I did a brief stint working in a remote resort in Seven Spirit Bay, NT. It was an amazing experience.
My next major Chef role was at Alira Moorish Food & Wine Bar, this is where the next phase of my cooking took place. I was Sous Chef and Head Chef there; I learnt a lot about layering flavours as well as other cooking techniques that have stayed with me even to today.
From there, I moved to the Hugos Group. I was Head Chef of Hugo’s Bar & Pizza and Hugo’s Catering for almost four years. I then moved to the Imperial Hotel Paddington as Head Chef, putting together a paddock to plate concept, working between farms in the Southern Highlands and producing menus that reflected the seasonal goodies you can source from the area, along with amazing wines!
After leaving the Imperial, I moved back to Hobart where I took up a role at MONA as Sous Chef of their new flagship Spanish eatery, FARO. After some time, the opportunity for myself and my wife to start our own business came along and the rest, as they say, is history.
I’m a Chef that likes to keep it simple, no fuss! I just want to deliver good flavours and techniques that make good looking food. My ethos is three elements on the plate, any more than that and you lose the hero in the dish. Good ingredients, positive work culture (no Gordon Ramsay antics) and a good glass of wine!
Have you always wanted to be a Chef?
I started cooking because growing up I was always hungry and I had my head in the fridge constantly looking for something delicious, I’d get very creative having more fails than success, but that’s how I learned. Starting with making the best, toasted sandwich to making fresh pasta, it’s from then, that I realised a job in the food industry was for me. Life’s too short to eat crap food!
How would you define your style?
Fun, rustic flavour forward…. I probably use too much butter!
What is your feature flavour these days?
Sweet and sour! I love good olive oil, sherry or chardonnay vinegar. Cheese, wine and cured meats are life!
Obsessive-compulsive about?
Empty containers in the cool room drive me bananas.
Your greatest culinary influence:
Travelling around my wife’s hometown in India! Jaipur has some of the most colourful and delicious street food I’ve ever eaten.
What do you love about this business?
The people, the wine, my staff and of course getting to share my food and hospitality with the people of Potts Point and all that make the time to visit us.
An ingredient you can’t live without?
Several! Cheese, cured meats, good eggs, chocolate, wine, if that’s an ingredient? Did I mention cheese?
Most ‘eyebrow-raising’ menu item?
Beef cheek. Raw fish tostada. Yamba prawns.
Signature dish:
Our Spanish Bomba rice with saffron, fennel and roasted King prawns. 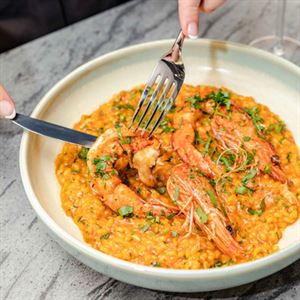 Sydneysiders have a new brunch spot by day and wine bar by night with the arrival of La Bomba on Challis Avenue in Potts Point. This new bambino on the block has undergone extensive renovation before opening, with bold geometric tiled floors and a contemporary yet rustic fit out of earthy tones, that flows through to an appealing alfresco area ideal for lingering over a coffee or glass of vino. Expect Spanish-Mediterranean inspired fare from breakfast and snacks through to heartier dinner options; perhaps kick-start your day with Sobrassada – fried egg, Mojo Verde, toast and Manchego cheese. Drop by later to snack on La Boqueria Spanish cured meats, pickles and olives; while evening diners satiate hunger pangs with plates like beef cheek, Pedro Ximenez, cauliflower and Jamon crumb.