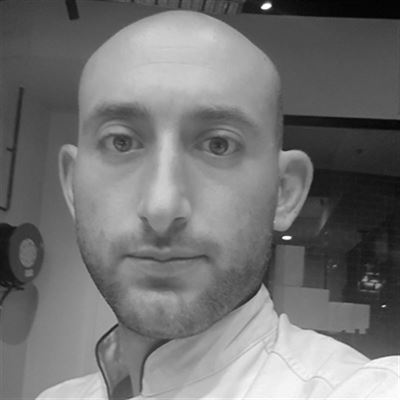 Born:
Sinalunga Siena province, Tuscany Italy.
History:
I began my studies at the Hospitality School of Central Italy in Chianciano Terme. There, I learned all the aspects of Italian and international cuisine, including floor, bar and hotel reception duties. My studies were a total of five years and on the third year I was given the choice of specialisation and I decided to become a Chef.
During Summer school holidays (three months in Italy), our cooking instructors arranged apprenticeships for us in high-end restaurants in the tourist places around Italy. Those Summer jobs have deeply shaped my character and skills, as seasonal work in the kitchen or on the floor means four months or more of seven double shifts per week, yes, no time for rest whatsoever! At the end of the Summer jobs, I went back to school. That story lasts until my fifth year when I got my diploma. After school, I worked in a high-volume restaurant in the Atahotel Quark Milan for a year in 2012 as a Commis de Cuisine, assisting the Chef de Partie preparing food for over 1000 customers in a day.
Then, I went back to Tuscany for two years until 2015, where I worked for a good friend, Chef Fabrizio Peruzzi as well as Chef, Walter Redaelli who became my mentors, as they taught me how to use the ingredients from my land like Nonna used to do. I still cook Bolognese the way Nonna used to and the secret ingredient is time, it takes four hours of care and every minute is worth the effort as the result is divine!
After that, I finally started travelling, to England first. I was in Newcastle upon Tyne and stayed there for two years, always cooking Italian, Sardinian to be specific. I expanded my seafood knowledge there and took charge of my first kitchen. I began dreaming about Australia and decided to move here in 2008. I have enjoyed living and working in Sydney for the last 10 years, working at several very well-known restaurants such as Otto ristorante, The Grounds of Alexandria, Bondi Hardware and now Alba Salentinian (2019)
Have you always wanted to be a Chef?
The main reason for choosing to become a Chef was because it lends itself well to travelling around the world. I know, it sounds funny, but passion or love for the industry was not why I began this journey.
How would you define your style?
I link tradition and beautiful flavours using fresh, seasonal and vibrant ingredients. My style is based on constant self-improvement, expanding and sharing my knowledge. I’m always open to changes and attentive to details.
What is your feature flavour these days?
The hearty flavours of Winter vegetables matched with the richness of animal protein softened by the aroma of fresh herbs.
Obsessive-compulsive about?
Keeping my ingredients fresh, especially my foraged herbs and petite bouche.
Your greatest culinary influence?
As I mentioned above, my mentors, the Italian Chefs who have trained me and here in Australia, my job is influenced by the Asian and Middle Eastern wave that is basically what Modern Australian cuisine is also about.
What do you love about this business?
I have been cooking authentic Italian food and I’ve realized how much I love it!
An ingredient you can’t live without?
Extra virgin olive oil.
Most ‘eyebrow-raising’ menu item?
Truffle in winter and fresh scampi in Summer.
Signature dish:
Pappardelle with duck ragout, fresh porcini mushrooms and aged pecorino. 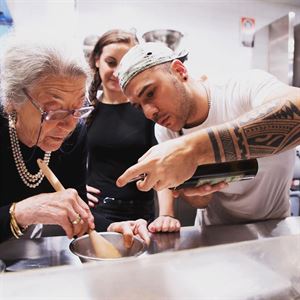 Sharing Nonna's handwritten recipes along with Mamma in the kitchen, Alba Salentinian Restaurant on King Street dishes up a taste of regional Italy to Newtown diners. A warm and rustic ambience of exposed brick, subway tiles and blackboard specials on the walls, sets the scene for authentic dining from a menu championing the cuisine from the Southern Italian province of Salento. Aiming to keep traditions alive through generations, expect to delve into oven-baked potato gratin, slow-cooked tomatoes, onions, capers, olives, mint and pecorino; before saying buon appetito to overnight marinated octopus, cooked with potatoes, tomatoes, red wine and herbs, served with bread. Pasta lovers will salivate over housemade tria, with mussels, garlic and chilli sauce, chickpea purée and fried pasta.