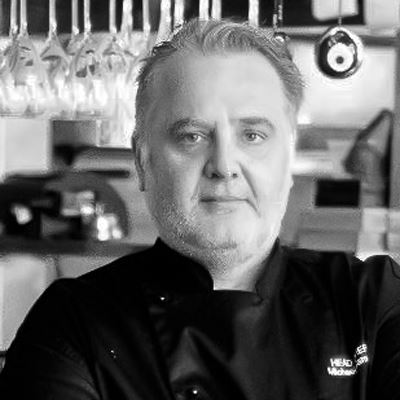 Born:
Samos Island, Greece.
History:
Chef Samos was born on the Island of Samos Greece, and could not help but be drawn to the kitchen.
The Island of course, boasted some of the freshest seafood and produce available to Chefs anywhere, and that abundance excited Chef Samos and inspired him to create some of the most elaborate seafood dishes.
Chef Samos started cooking from the age of 20 and has not stopped since. It has now become a part of his DNA which he so brilliantly executes in his role as Executive Chef for Aristotle’s Neutral Bay.
Have you always wanted to be a Chef?
Yes, ever since I was 20-years-old. When I recognised how much I could create from the beautiful fresh seafood on the island.
How would you define your style?
Traditional Greek with a classic modern twist, I like to concentrate on the flavours of the product and define them.
What is your feature flavour these days?
Anything slow cooked, especially the lamb shoulder we cook at Aristotle’s, as well as my signature dish (Astakomakaronada) - Moreton Bay bug pasta.
Obsessive compulsive about?
Fresh produce and an orderly kitchen.
Your greatest culinary inspirations/influences:
I was inspired by many Chefs on the Island and I wanted to capture the same flavour they captured, but redesign it so it was mine.
What do you love about this business?
That I can bring the taste of Greece to any part of the world and that my food brings friends and family together.
An ingredient you can’t live without?
Fresh seafood, sage and lemon.
Most ‘eyebrow raising’ menu item?
Moreton Bay bug pasta.
Signature dish:
Slow cooked lamb shoulder with lemon potatoes, steamed greens and spiced yoghurt.
Back to Top