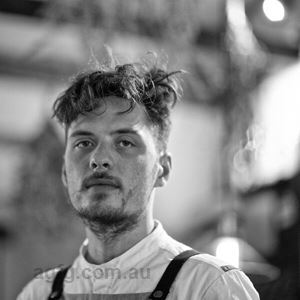 Born:
Bowral, NSW.
History:
From an early age, I always had an interest in creativity and found food as a creative outlet in my late teens.
Have you always want to be a Chef?
No. When I was young, I wanted to be a farmer, then a little later a carpenter. However, it was the atmosphere in the kitchen that drew me towards cooking, the personalities, the pace of it and the overall energy. From there, I feel in love with food.
How would you define your style?
On the plate, my food is simple but the work is done beforehand as everything is made from scratch and takes time to prepare. For instance, some of the miso's that we use take anywhere from four days to three weeks to be ready and they need to be checked and maintained over that time to ensure that nothing has gone wrong.
What is your feature flavour these days?
Koji. It’s a mould that we inoculate rice with to break down the starches, probably best known as the first step in the process of making sake. Currently, we have it on a dish with smoked kingfish and yuzu koshu.
Obsessive compulsive about?
Everything. Most importantly, composition and balance.
Your greatest culinary inspirations/influences:
Josh Skenes.
What do you love about this business?
The diversity of people: suppliers, customers and co-workers.
An ingredient you can’t live without?
Brown onion.
Most ‘eyebrow raising’ menu item?
Cultured venison heart.
Signature dish:
Radicchio, laver, black garlic and sour cherry.