It used to be called "The Cake of a Wife Time..." (Betty Adams extract), but why are we so enamoured with it?

Red velvet – beautifully chocolate, yet gracefully passionate with a bold red hue draws us in like a moth to a flame. Naturally, cooking grants the best of both worlds, being both a science and an art, the elusive red velvet is one in the same. Modern and novice bakers seek red food dye to make these bright creations, however, red velvet was invented by a chemical reaction, not just because someone decided to paint the town in red. 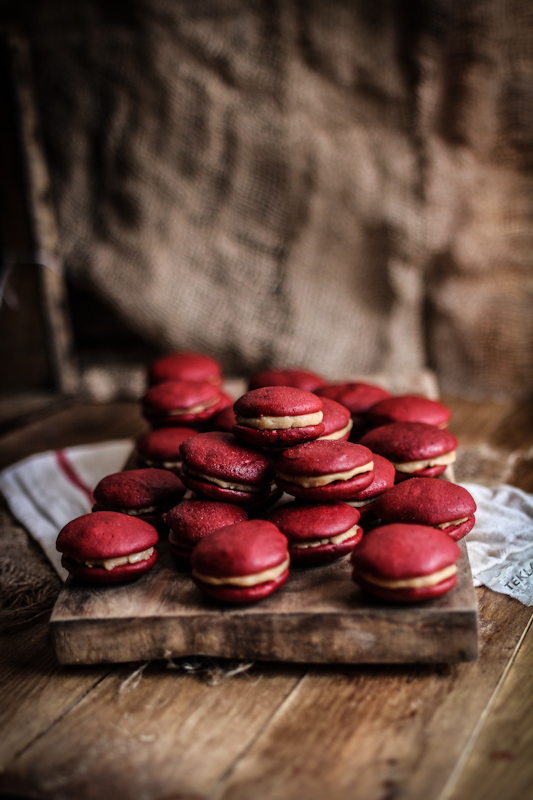 Red Velvet Whoopie Pies (very American), however, you can see the strong use of food colouring.

The original red velvet cakes were exactly as they’re named, they were produced through more of a stain of red than a deliberate few drops of food colouring. Many recipes varied in the beginning, but a few things were constant; the combination of baking soda and either buttermilk or vinegar created plenty of bubbles to ensure the delightfully fluffy texture (like velvet) upon baking and while this occurred they also reacted with the cocoa, which was traditionally an acidic element, changing colour in the presence of strong acids due to the compound anthocyanins – the red part and thus, red velvet was born. 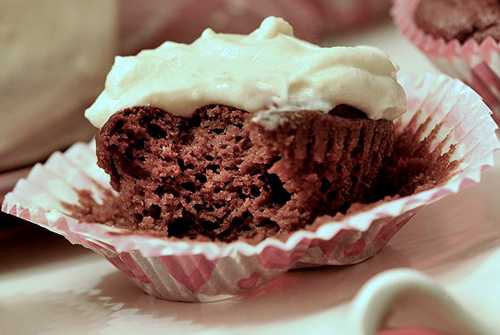 Red Velvet cupcake, using the natural process as well as some beetroot puree for a darker, more vibrant red.

The red hue of the “ancients,” so to speak, wasn’t the red we know today, it was definitely more chocolate than beet so that’s why many recipes used to call for beetroot puree to further darken the sponge upon baking. The reason we don’t see this today is because cocoa powder is now processed in a way that modified its pH level to become more alkaline. Dutch cocoa in particular is heavily treated with an alkali to create a darker, richer product, which is less likely to react with acids. You’ll be hard pressed to find an unprocessed cocoa, so we suggest looking for natural cocoa powder or perhaps organic cacao powder if you are looking for a more natural way of baking that red velvet cupcake this Valentine’s Day.

If you’re not one for experiments, then go ahead and try our delightfully RED red velvet recipes here – or dive in and naturalise our recipes! If you do, please let us know via our facebook page.