New South Wales has the largest population of Aboriginal Australians than any other state in the country, however, the state receives less financial support for Indigenous programs than any other region in the country; pro-activeness and support by audience appreciation to Indigenous art and culture is key to empowerment and inclusion in our diverse society.

Many feel there is a discrepancy between being interested in engaging, and not knowing how to access Aboriginal culture or to support it. Boomerang Festival offers the solution for this gap for those whom yearn to be a part of and celebrate the ethereal spirit of dreamtime that the Indigenous are so acutely attuned to. 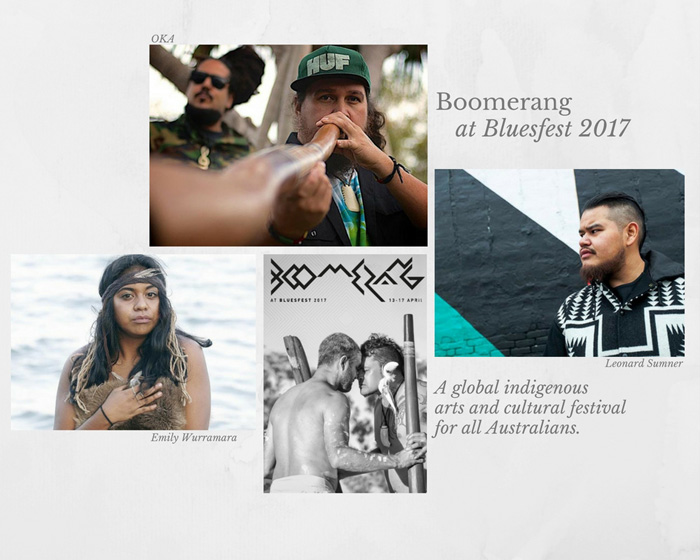 Produced from an Aboriginal perspective by one of Australia’s most accomplished and respected Artistic Directors, and proud Bundjalung woman, Rhoda Roberts, Boomerang Festival is programmed with high-quality performance art, featuring masters of craft and cultural leaders from around the globe.

The 28th annual Bluesfest for 2017 has, for the second year in the row, made a gesture of support, by adding Boomerang Festival to their program.

Bluesfest attracts an average patronage of 100,000 per festival, giving those showcasing their work at Boomerang a broad platform of audience access, with the support from the Australian Council for the Arts and Bluesfest, Byron Bay, Boomerang will feature as a smaller ‘festival within a festival’ at this year’s Bluesfest.

"The Boomerang precinct at Bluesfest is all about cherishing culture and ending the disparity between Aboriginal and non-Aboriginal Australia. This intergenerational exchange will allow our loyal audiences a unique hands-on engagement and experience while allowing the Boomerang Festival to build audiences and find support as a future stand-alone festival.” - Peter Noble, Festival Director, Bluesfest.

As part of the stellar line-up of artists for the Boomerang Festival is renowned Sunshine Coast group, OKA. Drawing upon their indigenous connection to place and country, OKA creates their signature feel good Australian earth sound, with an irresistible blend of influences spanning house, big beat, reggae-dub, Roots, Jazz and world music. Led by Stu Fergie on Yidaki (aka DidgeriSTU) who connects you to earth with the deep subsonic pulse and resonance of his Yidaki (didgeridoo). OKA will be performing on Friday April 14 and Sunday April 16.

Boomerang Festival will also feature Emily Wurramara. Driven by passion for culture - heard through every beat and skip of her deeply engaging and personal songs sung in both English and Anindilyakwa, the traditional language of her home, Groote Eylandt in the Northern Territory. With national airplay on ABC local and Triple J, Emily has performed across the country and at festivals including Garma, Woodford Folk Festival, Island Vibes, Bellingen Turtle Fest and Clancestry. Wurramara has been awarded several Queensland Music Award nominations and has been showcased on Triple J Unearthed, being labelled as someone to watch with a bright future. Emily Wurramara is performing on Friday April 14 and Saturday April 15.