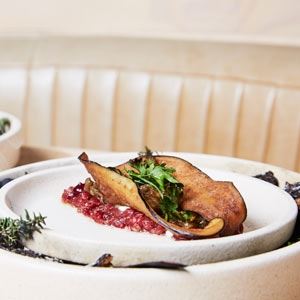 "This dish really highlights what we are trying to achieve at The Press Club, it is very inspired by Greek heritage and culture, but that heritage is seen through a very Australian lens." – Reuben Davis.

On a charcoal barbeque, grill the eggplant until black on the outside. Plunge into ice water, remove and peel.

Whisk soy sauce, miso paste and chicken stock together and steep the peeled eggplants in the marinade for four hours.

In a baking tray, lay vine leaves with eggplant on top and then another layer of vine leaves to cover with a small amount of ash from the barbeque. Bake in the oven at 160 C for one hour.

Remove the tray from the oven and allow to cool, carefully remove the vine leaves and ash, remove eggplant and roughly chop.

In a shallow tray, place some ice with greaseproof paper on top. Place wallaby on top and put the tray inside a larger tray. In a small bowl put the coal and place the bowl in the larger tray with the butter on top.

Wrap the tray and leave to smoke for 15 minutes.

Remove wallaby from tray and dice into small pieces. Peel and dice the shallot to the same size as the wallaby pieces and mix the two together in a bowl.

Mix yoghurt and tahini paste together, season and place in a piping bag. Set aside.

Put sugar, vinegar and pomegranate juice into a saucepan. Add agar agar and bring to the boil.

Boil for two minutes, then pour into a container and set in the fridge for 15 minutes.

Blend in a blender until smooth and set aside in a piping bag.

Thinly slice eggplant on a mandolin, dust with tapioca flour.

Put canola oil into a medium saucepan and heat to 160 C.

Fry the eggplant slices until golden and then set aside.

Put the wallaby on a plate, spreading into an organic circle shape.

Dot some tahini yoghurt and pomegranate ketchup over the top.

Spoon some of the eggplant mixture on top of the wallaby along with three eggplant crisps. Garnish with grilled parsley and serve. 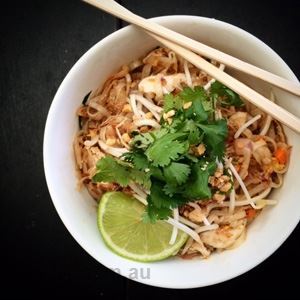 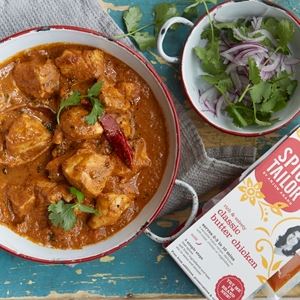 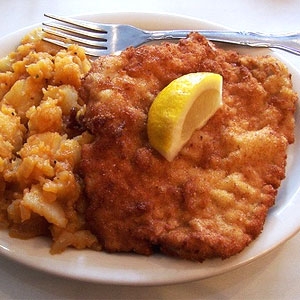 To spice up your schnitzel, substitute veal with boneless pork chops.