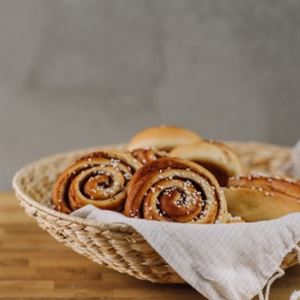 Place the milk in a small pot and heat gently until lukewarm (so it feels neutral to the touch when you dip your finger into it). Remove from the heat, sprinkle the yeast over the top and whisk lightly to disperse. Whisk in the sugar and stand 3 minutes. Add the melted butter and stir to combine.

Mix flour and salt together in a large bowl and make a well in the centre. Add the milk and butter mixture and stir until just combined. Tip the dough onto a lightly floured surface and knead until smooth and silky – about 60-100 kneading strokes. Place the dough in a large, lightly oiled container, cover with a clean cloth and leave to rise in a warm place until it has almost doubled in size – about 1 hour.

When risen, divide the dough in half and refrigerate or freeze one half for later use. Roll the other half out to a 60cm x 30cm rectangle on a lightly floured board. To fill, brush the rolled dough liberally with the softened butter. Mix together the sugar and cinnamon and sprinkle over the top of the butter.

Roll the dough up tightly along the longest edge into a cylinder shape. Cut into slices about 4cm wide. You should have about 20 scrolls. Line the base of a 28cm-30cm round cake tin with baking paper. Arrange the scrolls in the lined cake tin, allowing 1cm-2cm between them. Cover with a clean tea towel and leave to rise in a warm place (not hot or the butter will melt) for 20 minutes.

While the scrolls are rising, preheat the oven to 220 C. Bake scrolls for 12-15 minutes until golden and cooked through.

To glaze the scrolls, heat the sugar and water in a small pot until the sugar is dissolved. Boil for 5 minutes. Brush the scrolls with hot syrup as they emerge from the oven or dust with icing sugar.

To make in a bread maker: Place all the ingredients except the filling and glaze in a bread maker and put on dough mode. Once the dough has risen, divide it in half, roll out and continue as above. 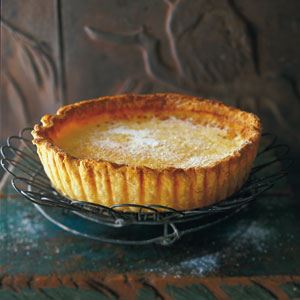 For freshness at the end of a meal, this tart, inspired by Sydney chef Tony Bilson’s recipe, never f... 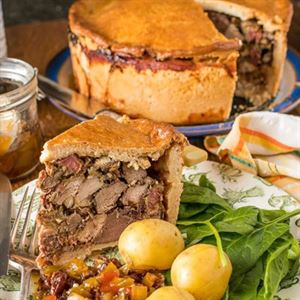 This hearty game pie is the ultimate winter treat! 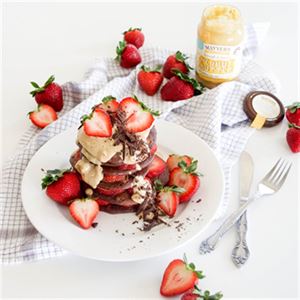 This delicious vegan recipe has been created by Rebecca Young for you to enjoy on Shrove Tuesday (Pa...