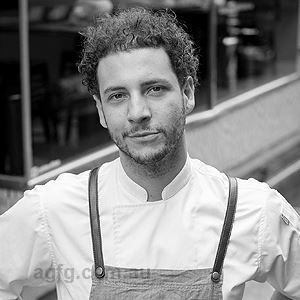 I am obsessive compulsive about height. I hate when things fall flat on a plate!

I worked as an apprentice at various restaurants around Victoria before qualifying as a chef at Va Tutto in Ivanhoe. Following that, I worked and travelled around Europe for three years, doing stints at In de Wulf in Belgium, Relae in Copenhagen, and The Fat Duck in Bray, among others. Now I’m back in Melbourne and after creating wandering food events company Them Bones — specialising in pop-up tasting menus — I have opened a café/ bar in Eltham. I continue to cater and host Them Bones events around Victoria, with a hope to travel further in 2015.

I used to want to be a graphic designer…I don’t know why, but from a really young age I wanted to have a bar. I didn’t realise that I wanted to be a chef until I worked in hospitality after finishing school and realised that it was also a creative field.

For Them Bones, it’s Modern European, but I avoid any specific cultural influence. The aim is to cook with exciting ingredients and apply varied and unique techniques. At Little Drop of Poison, we serve familiar, comforting café and bar food with surprising twists, like our take on the breakfast sandwich, the McPoison. It’s Melbourne café fare with a fine dining mindset.

Funky comes to mind, but it’s more delicious than that sounds! We’re featuring lots of funky wines at Little Drop of Poison and interesting beers.

Obsessive compulsive about?
Height! I hate it when things fall flat on a plate.

Kobe Desramaults of In de Wulf. The months I spent there working side by side with him in the middle of nowhere in Belgium will impact my style forever. He has this badass approach to service and a quick thinking energy about him. Heston, of course. “Question everything”…that says it all for me.

I like the characters I’ve met along the way. This industry is such an eclectic bunch. I love the creativity and the fact you get to play with all the senses.

I think I change things too often to have a signature dish. At Little Drop of Poison, the customers would probably say our pumpkin cakes with cream cheese icing and pumpkin seed praline. We bake them in hemisphere moulds and put the icing down the middle so you get a little bit of everything in each bite. For Them Bones dinners I always start with a mock carrot: a cone shaped cracker made from carrot juice, topped with a disc of pickled carrot. It’s filled with a yoghurt and leftover pickling liquid mixture. 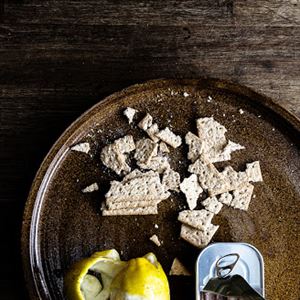